It's now the second day of Lent, and you know what that means!

It's really enough to make you give up all movies for 40 days and 40 nights, isn't it?

Speaking of sacrifices of the season, Mitt Romney has joined Rudy Giuliani and dropped out of the Republican presidential primaries. I do not like any of the GOP nominees, and there was something especially odious and calculating about Romney, particularly his desire to "double Guantanamo" and his absurd statement about how his sons were "sacrificing" for the country in wartime by working on his presidential run. He campaigned with all the style and sincerity of a Disney "Hall of Presidents" character, but there was part of me that began to feel for the guy over the last few weeks, as his fellow presidential candidates and nearly all of cable 'news' media started piling on; I'd never want him as President (although, like Josh Marshall, I might want him as a wonderfully incompetent Repub nominee), but the mockery was all too eerily familiar of what happened to Al Gore eight years ago, which begs the question: why do we always let Chris Matthews determine our nominees?

It was particularly fascinating watching his eulogy being written on MSNBC Tuesday night/Wednesday morning, even though he won more states than feted media darling Mike Huckabee (who, as a Romney campaign spokesman fairly noted on CNN the next day, only won states in his home region-- the same joke MSNBC made about Romney, unfairly-- and only won states with heavy evangelical populations, suggesting the narrowness of his Gomer Pyle appeal). I'm no Romney supporter--and his speech today, loaded with race-bating red meat, didn't do him any further favors-- but the larger point for me is the inability of any candidate to get out of pre-approved Mean Girls narratives.

Of course, Tuesday was a "great, great night for John McCain," a man whose media fluffing might only be derailed by a DUI homicide, or by finding a dead prostitute in his bed. But even then, I could imagine Howard Fineman spinning it the Commander's way:

"Chris, this is just another example of John McCain's bravery and honesty. Any other candidate would've hidden the dead body, but McCain is a maverick: he's not afraid to be photographed with dead prostitutes, and he's going to bravely tell America, 'My friends, those prostitutes aren't coming back.' He's a great, great man, and he serves kick-ass coffee on his bus..."

Here, I think, Romney missed a bet: he should've run against the media. He's hated by them anyway, so as the line from The West Wing went, "If everyone's gonna see your guy as arrogant, anyway, you might as well knock some bodies down with it." The party can argue all day about who the "true conservative" is, but the one thing that unites them (and any poltiical party, really), is a hatred for the media. And it's easy enough to paint McCain as the media darling: just take those John King and Chris Matthews clips, make a montage, and end it with, "Piss off the media: Vote Romney." That's worth one or two states, right there.

Or, you could just run this photo that I saw on Digby today, which I like to think came from a Mardi Gras party this week: 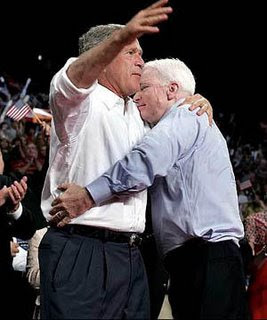 On Mardi Eve, the Travel Channel ran Bourdain's trip to New Orleans. It was a very strong episode-- the best in a couple of years, actually, shorn of the hipster tics and goofy stunts that have overtaken much of his recent work-- but a very sad one, as you might expect. Good or bad, most of No Reservations displays a joy in exploring and discovering new places, people and cuisine, but post-Katrina N.O. obviously doesn't allow this. Opening with a haunting shot of a man mowing his lawn, surrounded by destroyed or damaged homes, and moving through the graffiti-covered spaces of city, through the empty massive dining rooms at Antoine's, showing us the sparsely populated barrooms of po' boy joints, the episode gave visual and literal voice to a population that's moved off the radar of much of the media (It's notable that John Edwards opened and closed his presidential campaign in the Ninth Ward-- and that he was the most mocked of the major Dems by the MSNBC dwarfs). At the same time, there was a humor and resiliency to folks who appeared, a community showing tremendous bravery in the face of overwhelming tragedy and negligence (a negligence that might sadly repeat itself in neighboring areas).

The next night, as if by serendipity, my I-pod called up Paul Simon's "Take Me To The Mardi Gras," a song that could still be the city's anthem, a song about dancing and singing and living, in the face of a sacrifice far greater than Mitt Romney's or Josh Hartnett's: 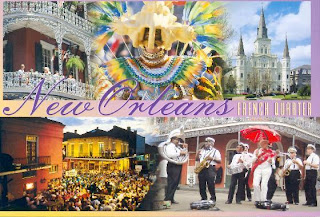 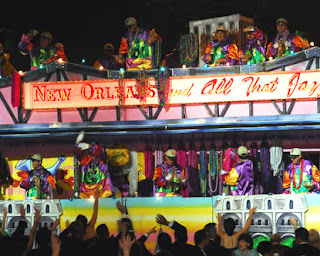 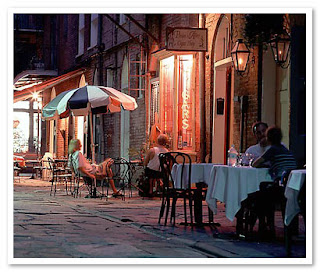 And I will lay my burden down
Rest my head upon that shore
And when I wear that starry crown
I won't be wanting anymore. 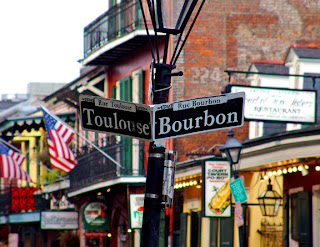 Brian Doan said…
I know-- I'm sure there's a whole Bush-McCain "ho-yay" fic to be written about that photo. (: I just love it because it puts the visual lie that McCain is this "moderate maverick" he's been campaigning as.
February 8, 2008 at 12:21 PM