The Big Knife In The Gray Lady 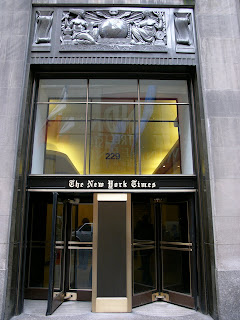 Finding new and inventive ways to express their love of theatrical blowhards, The New York Times today printed a piece by David Mamet that amounts to a testimony to the work of David Mamet, specifically Speed-The-Plow (it is also a covert reiteration of Mamet's come-to-Jesus embrace of political conservatism, but that's neither here nor there).

Regurgitating cliches about Art, Mammon and the Soul that felt cliched in Nathaniel West's day, Mamet opens with a Newton-and-the-apple moment: "“SPEED-THE-PLOW,” it occurs to me, may be said to be part of that particularly American subgenre, the Workplace Drama" (without, I imagine, meaning to, Mamet ironically evokes the pedantic phrasing of the anti-hero of his worst play, Oleanna). He follows this with some Composition 101 musing on the nature of Drama and backstage shenanigans ("In short, it’s a cruel and interesting world; and, as Americans, we revel in the how-to of it all."), before launching into a plot summary of "Plow" that must have been hard to type, given how often Mamet stops to pat himself on the back. Closing with some musings on corporate vs. public funding that might have been more interesting had they not felt more ham-handed than a scene from The Unit (and had they not been filled with a college freshman's awkward referencing of Marx and Adam Smith), Mamet ends with an advertisement for himself that might have made Norman Mailer blush:

Crass commercials (TV and the movies) are our American culture; they give us the Badda Bing, and Not That There’s Anything Wrong With That, and I’m Mad as Hell and I’m Not Going to Take It Anymore, and “South Park,” and Dennis Franz, and Sarah Jessica Parker, “Six Feet Under,” Nascar and “Lost.” All we’ve ever had from public television is 60 years of the cheetah overpowering the same old antelope.

And yes, yes, yes, we right-thinking folk go on about the need for culture, but on Sunday afternoons we turn on the ballgame in preference to the biography of Shostakovich.

But what about High Art? I, personally, don’t think it is the lookout of drama. I believe that the business of America is business, and the aim of drama is to put tushies in the seats; and that the best way to do that is to write a ripping yarn, with a bunch of sex, some nifty plot twists and a lot of snappy dialogue.

If you are looking for such, I suggest “Speed-the-Plow.”


Hear, hear! I have no real opinion on Speed-the-Plow, but I stand in awe of Mamet's clueless self-aggrandizing, and admire even more The Times' willingness to publish it. In this age of newspaper downsizing, I hope Mamet's essay will act as a model for future attempts to cut out the middleman: I can hardly breathe, I'm in such anticipation of seeing David E. Kelly's front-of-the-Arts review of the season premiere of Boston Legal; I eagerly anticipate the Coen Brothers' rave of Burn After Reading; I wonder if Woody Allen will give a mixed review of his next Scarlett Johansson epic; I imagine FallOut Boy will give props to their new record; and of course, I can't wait to read the McCain and Obama camps' coverage of their own campaigns. As Griffin Mill says in Robert Altman's adaptation of The Player, "I was just thinking what an interesting concept it is to eliminate the writer from the artistic process. If we could just get rid of these actors and directors, maybe we've got something here."
Labels: Mamet Media movies Politics Random Oddness Theater TV