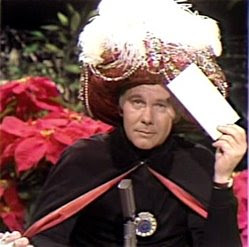 Going out on a limb for you, dear reader...

1) Ten films will be nominated for Best Picture.

2) One of those ten will win the award.

5) During the "In Memoriam" section of the show, some folks will receive more applause than others. You stay classy, Hollywood.

6) I will be fine with point #5, as long as they let us see the clips of those who've passed. Last year's swooping cinematography, with its implied statement, "let's make the Oscars look like the Tonys, because theater is inherently better than cinema," won't fly this year.

7) Someone will make a "controversial" statement at the podium about their pet issue, which will set off the obligatory kabuki of support/condemnation from various points on the political spectrum.

8) The hosts will be smart and funny, and then castigated a year later when the new host is announced: "(Fill-in-the-blank) is so much more appropriate than DaveJonWhoopiSteveAlecChris!" This roundelay will finally end when the host position is given to Jay Leno, who will never let it go.

10) We will all laugh at the shallowness of the Oscars, their silly fashions, their overwrought sense of cultural superiority, their sentimentality, their overhyped winners...At least until next year, when the filmmakers we like are nominated, and suddenly the Oscars are the most important marker of quality ever.

Oh, and I suspect The Hurt Locker is going to take it.
Labels: Awards movies Random Oddness