Fifty-seven years ago, in his review of North by Northwest in The Saturday Review, Hollis Alpert observed, "If, by the way, you like to take your suspense straight, the movie has all that's necessary to keep you on the edge of your seat, as Cary Grant gets himself into a variety of baffling and dangerous corners; it is only when you adopt the basic premise that Cary Grant could not possibly come to fatal harm that the tongue in Hitchcock's cheek becomes plainly visible."

I thought about that quote while watching Jack Reacher: Never Go Back, the sequel to the 2012 cult hit adaptation of Lee Child's "Jack Reacher" series that cast Tom Cruise as the ex-military, drifter hero. There are a few good one-liners in the new film, which opened yesterday, but many of the attempted jokes or catch phrases fall short, in part because the movie that surrounds them is intensely earnest in both its action and its character development (as opposed to Hitchcock's spy classic, or the variously arch James Bond films of the '60s and '70s that took North by Northwest as their basic template). However, if we take Alpert's observation as our skeleton key to the film's dry visual humor, then suddenly it becomes easier to see how director and co-writer Edward Zwick is having some subtle fun with the Cruise persona, and the unavoidable goofiness of the genre that Never Go Back works so hard to conceal.

For a start, look at that image above, of Cruise running side-by-side with co-star Cobie Smulders: they run in exactly the same way. The film knows this, and gets a lot of witty mileage (to pardon the pun) out of repeating this trope throughout the movie; in fact, a great deal of the movie's fun comes from watching the twinned nature of its two stars in the same frame, with the same intense looks, same fluid action panache, and same sense of closed-off emotions. It's like a re-gendered take on the Lethal Weapon school of buddy cop films, except both actors are playing Riggs. Dropping these thermodynamic kindred spirits into the middle of a movie that is 1/3 conspiracy espionage chase, 2/3 family dramedy gives Never Go Back a pleasing and deadpan instability: we're placed in the emotional position of one of Reacher's targets,  never knowing what direction things are going to move next, or how suddenly it will all just go.

As the movie begins, Reacher (Cruise) has come to visit Major Susan Turner (Smulders), who now heads the Military Police unit in Virginia that was once Reacher's command. They've helped each other on a case, flirted a bit on the phone, and hinted at setting up a date. But when Reacher arrives unexpectedly for a visit, he finds that Turner has been arrested, relieved of her post, and thrown into an Army jail cell. He also finds out that a woman has claimed him as the father in a paternity suit, and that he may have a daughter, Samantha (Danika Yarosh), that he has never met. The two stories dovetail as Turner's Army-appointed lawyer is murdered, Reacher breaks Turner out of jail, they rescue Samantha from the hit-men that seem to be on everyone's trail, and the three take off for a bloody climax in New Orleans. 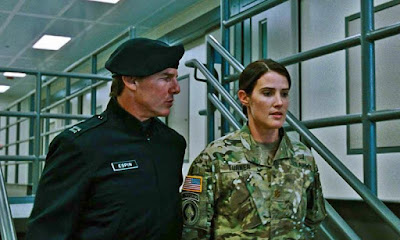 Based on Child's 2013 novel of the same name, Never Go Back takes that book's plot as its basic blocks, even as it inverts the novel's emphasis and tone, rewriting and rearranging certain narrative points like they were Tetris pieces. Child's book focused on a labyrinthine military conspiracy involving government contractors and corrupt Army officers in Afghanistan: rather than staying primarily in the DC and New Orleans areas like the film, the book literally went cross-country, dropping Reacher and Turner in a stolen Corvette and landing them in California, with stops along the way for violent encounters with meth-heads and related bad guys. The "Daughter Samantha" subplot was more ancillary, an intriguing red herring whose status as a red herring was its point: in the book, Samantha represents a momentary glimpse of a life Reacher's violent restlessness means he can never really have.

That darker kind of story might have fit the Reacher of the 2012 movie a bit better: that movie was more stripped-down in its narrative and characters, more a pure action machine (and a very enjoyable one). Cruise's performance in the first film was primarily silent, or at least that's what remains in my memory of it: lots of stares, sleek movements punctuated by an eerie and effective stillness in his body-at-rest poses. To return to Hitchcock, plot was the purest kind of MacGuffin in Jack Reacher, the hanger on which director Christopher McQuarrie draped dizzying violence and a growling Werner Herzog.

Zwick and co-writer Marshall Herskovitz have long gone in for more dialogue-driven, pensive character studies, dating back to their groundbreaking TV series thirtysomething and My So-Called Life (as a solo filmmaker, Zwick has also long been fascinated with the costs and myths of military honor, in Glory (1989), Courage Under Fire (1996) and a previous Cruise collaboration, the misunderstood The Last Samurai (2004). It's not surprising, then, that they flip Child's script, keeping his basic conspiracy plot, but subordinating it to the family-you-make dynamics between Reacher, Samantha and Turner. This is a wise choice that emphasizes both the talents of its writers and the gifts of its cast, who have a lot of fun with the strained dynamics of learning about each other while dodging gunfire (at one point, they drive off in an action-dented Ford minivan, a lovely symbol of the film's suburban parody). It also lets Zwick and Herskovitz overcome one of the book's primary adaptation problems: Child's tendency to devote much of the prose to the endless thoughts and spinning wheels of Reacher as he works out the mystery and observes Turner in action. Absent an intrusive narration, that might have been hard to translate to the screen, although Reacher's pensiveness is well captured by Cruise, who shares with Robert Downey, Jr. the unique ability to convey several thoughts at once through his darting eyes. 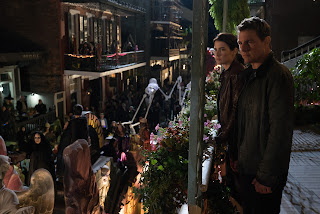 That doesn't mean the film skimps on action, though, as it stages a great set-piece amidst a Mardi Gras parade, and climaxes with a slow, brutal, drawn-out slug-fest at the end whose graphic exhaustion does a nice spin on the sometimes glossy nature of action movie violence. It also captures the novel's admiration for Major Turner in the great performance of Smulders, whose textured work here moves with three-dimensional ease from the physicality of the action scenes, to the comedy of the trio work with Cruise and Danika Yarosh, to the character's earned authority as an Army officer (and the resentments that have built up due to the misogyny she faces in that position). A recent Vulture piece observed how often Tom Cruise's action films have strong women at or near their centers, and that's especially true of Never Go Back; Cruise is great, but I left the film longing for a Cobie Smulders spin-off: Susan Turner: Never Stop Turning.

Unknown said…
Have you been hunting for valid real YouTube Views? Forget your worries, we can diligently help you to buy youtube subscriber
October 30, 2017 at 1:20 PM

xccc said…
Individuals who are able to expend money to do this to purchase twitter followers might easily get exposure for their merchandise immediately. buy twitter followers cheap
November 23, 2017 at 2:14 AM

OneGold88 said…
You have a very good 918kiss company Malaysia site, well constructed and very interesting 918kiss apk free download I have bookmarked you, hopefully, you 918kiss apk download for android keep posting new stuff, many thanks
August 26, 2019 at 10:45 AM

SCR888 Cafe said…
Nicely 918kiss ios presented information 918kiss app in this post, I prefer 918kiss apk to read this kind of stuff. The 918kiss download android quality of content is fine and the 918kiss login conclusion is good. Thanks for the post.
October 4, 2019 at 8:30 AM

norma said…
Great photos, it must be memorable live casino download for ever.

Woodman J Parker said…
Ultra Fast Keto Boost proteins, amino acids Essential, Folic Acid, Selenium, Thiamine, Manganese, Niacin, Zinc, and numerous others. Selenium is one of the primary in charge of this advantage,
since it goes about as a cell reinforcement, and is practical to avert harm brought about by free radicals. Notwithstanding containing extremely low level of fat,
https://purefitketodietplan.com/ultra-fast-keto-boost/

Elena jhones said…
It is expected that in order to lose weight, a low-calorie diet Go ketogenic is combined with the practice of physical activity to accelerate weight loss and increase health.
https://goketoganic.com/