Bob Hope started his film career in a dumb, intermittently funny short called Going Spanish (1934), whose loose 20-minute 'plot' sketched out the beginning and end of an engagement in a small Mexican tourist town. Four years later, his film career began in earnest when he and Shirley Ross sang "Thanks for the Memory," the sole moment of charm amidst the painfully frantic series of comedy sketches Mitchell Leisen offered in The Big Broadcast of 1938 (1938). He and Ross would repeat the tune that same year in Thanks for the Memory, an almost forgotten but very good dramedy about a young couple whose marriage is strained by the economic pressures of the 1930s. Nineteen years later, in the hit-and-miss Beau James (1957), Hope's portrayal of '20s New York mayor Jimmy Walker would detail the foibles of a man whose ego and charm are perpetually self-destructive to his marriage, his career, and his mistress (it's a deeply flawed film, but Hope's not the problem-- he understands the need to balance comedy and drama better than the script and direction do). And even in his dizzying '40s comedies with Paulette Goddard--particularly the very funny Nothing But The Truth (1941)-- there's an underlying sweetness to Hope that rarely got tapped by his scripts, but is very appealing; he's a guy whose scheming and verbal dexterity become shields against a crazy world desperate to corrupt him.

All of this is to say that The Facts of Life (1960), his deeply felt pas de deux with an excellent Lucille Ball, doesn't seem as much of an anomaly now, looking over the arc of Hope's career, as it might have to critics of its day, who seemed puzzled by the by-then-increasingly-rare attempt by Hope to do something outside of one-liners and slapstick. Telling the story of two distant friends who fall in love by accident on a couples trip to Acapulco-- despite the fact that they are each part of a different couple--The Facts of Life is at once very funny and very melancholy, picking up those earlier threads of love and marriage that were often played for laughs in Hope's movies, and inverting them to find the pain underneath. Life looks less like the surreal comedies of Hope's years at Paramount, and more like the darker dramas of 1960: Charles Lang's hard-edged, wide-screened, shadow-dotted black-and-white camera-work and Saul Bass's titles feel reminiscent of Otto Preminger's films, while Ball's sad and dreamy narration also calls to mind '50s melodramas from Douglas Sirk (in fact, this TCM article on the movie says it started as a script written for Olivia de Havilland and William Holden in 1951, "as an American variation on Brief Encounter"). And into this visual space of drama and tension are dropped two very skillful comedians whose gifts as actors were often very underrated, and whose more mature ages (Ball was 49, Hope 57) give an added resonance to this tale of a middle-aged affair. Hope and Ball are very well-matched. In her movies of the 1930s and 40s--the best work she ever did--Ball was brilliant at portraying women who were inevitably smarter than anyone gave them credit for; Hope's whole persona is the man who is not nearly as smart as he thinks he is.  Her darting eyes register everything (she's one of the great responsive actresses of all time--her face often conveys three emotions and two objections at once); his down-turned lip makes his face a cynical mask that hides his insecurity, even as the rhythm of his radio-trained voice betrays anger, love, and disappointment (it matters less what he says than the tempo at which he says it, like the very good dancer Hope also was). 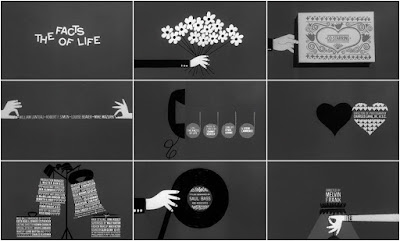 Given the opportunity to play something outside of their increasingly comfortable zones, both performers leap at the chance. The film even foregrounds this movement away from actorly personae by making the tired, strained qualities of Hope's stand-up schtick a plot point: Kitty (Ball)'s narration often refers to Larry (Hope) as the "Master of Ceremonies," and in their first scene together (at a country club Halloween party where Larry is telling terrible jokes), Kitty finishes his lines for him, because she knows the routines so well. Later, on a fishing boat in Mexico, Kitty suggests a deal: "You don't tell your dumb jokes, and I won't have to pretend they're funny." All of this meta playfulness is fun, but the payoff is how game Hope is throughout: he is often quite funny, but the humor arises out of (and stays within) his character, a sad ad man whose quips become a means of connecting with others, something Larry desperately wants (and finds, briefly, with Kitty).  There is slapstick, there are one-liners, there are some laugh-out-loud moments (particularly during a scene at a drive-in), but the control Hope displays throughout--making sure those moments of physical or verbal comedy seem realistic for the character he's playing, instead of just playing "Bob Hope"--gives the laughs greater resonance, and justifies the shift toward seriousness in the movie's second half. The actors and the script (by Melvin Frank and Norman Panama) do such a good job of getting us caught up in the Mexican romance of the film's first section that it's not until Kitty and Larry come home that we remember the families their affair affects, and the tensions begin to mount in both sad and funny ways (Ruth Hussey, in her final film role, is very good as Larry's wife). We know how the film will probably end (especially given the Production Code of the period), but how it gets there, and how we're supposed to ultimately feel about its resolution, remain surprisingly open-ended questions. 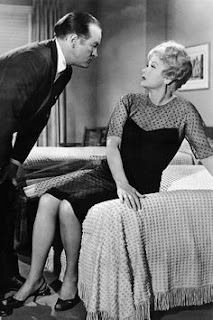 The TCM piece linked above notes a 1961 interview with Lucille Ball, where she stated, "Bob just didn't believe in his abilities as a dramatic actor. That was unfortunate because in my humble opinion he could have been a really fine one if he'd believed in himself. He should have branched out, given himself a chance." I think that's essentially correct, even if it underrates how good and ground-breaking his comedic performances between 1938 and 1954 (or so) were. But The Facts of Life also suggests why there was such a drop-off in quality in Hope's later films: as he releases Ball from an embrace on the country club dance floor, and wistfully watches her return to her husband, it's possible Hope knew he wasn't going to ever again say anything as poignant with that down-turned lip.

Very nice post. I definitely appreciate this site. Stick with it!
http://www.kuwait.prokr.net/
http://www.emirates.prokr.net/

Milo Anderson said…
The trailer looks good to me and it has sparked my interest. I am gonna check up on this and really sad to hear the demise of Curtis. May God make his journey easier for him.
July 26, 2017 at 12:41 PM