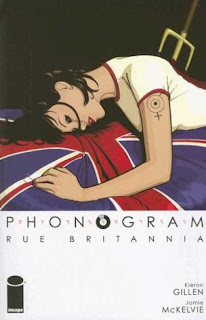 If you're the kind of person for whom pop music isn't just background noise or an occasional hobby but an all-consuming passion, Phonogram: Rue Britannia is sure to set your discophilia reeling with pleasure. If you have a particular love of post-'77 British pop, then the book's effortless magpie of visual and verbal references to bands like Oasis, Blur and Pulp should set off long-buried synapses of sonic memory like a needle hitting vinyl. And if you (like me) are the kind of person who might comb its witty and informative post-story "Glossary" to see what the authors say about favorite bands (and to quietly assemble lists of future I-tunes purchases in your head), then forget it, you're finished, dead, you're gone-- Kieron Gillen and Jamie McKelvie's gorgeous graphic novel is a must. Put down that Primal Scream seven-inch and get to your local comic shop immediately.

Originally published by Image as a six-issue, black-and-white miniseries in 2006 (with a follow-up miniseries"sequel"--actually individual stories set in the same magical universe--released last year), Phonogram opens with quick glances at a set of signifiers-- reflecting dark-rimmed glasses, just-so haircut, leather jacket, and the all-important lighter-'n'-cigarettes--whose fetish qualities are enhanced by their capture in individual, unconnected frames. 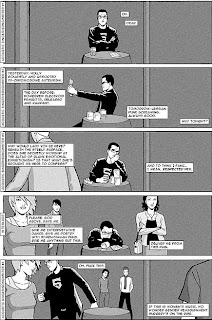 This is our lovable anti-hero David Kohl (in his own self-description, "Toxic and male. Utterly noxious. Totally perfect") getting ready for the evening, and these early panels immediately keys into the ways pop music can both deconstruct our identities as commodified consumers (we are what we wear), and rarify those same impulses (we are, simultaneously & gloriously, both stand-out individual and blissed-out member of a community).

More than most pop fans, though, David's literal being is determined by his taste-- he is a "phonomancer," able to analyze the qualities of singles and albums in order to unleash their actual, otherworldly magical qualities. In this netherworld running parallel to "our" 2006 London, phonomancers are "made" through certain aspects (i.e., genres or periods) of popular music, and David's is Britpop. Only something is happening to the Goddess Britannia, and it's starting to mess with David's memories. He flips on the stereo, starts singing along to Echobelly's "Great Things," and freezes-- when the hell did he ever love Echobelly? He starts to remember events in subtly different ways, and is haunted by his increasing inability (as Roland Barthes might put it) to make his tastes and his ideas match. This is deadly for a phonomancer, and David is further spooked by a confrontation with The Goddess (presumably of all music, although its left wonderfully ambiguous just how far her powers spread) at a nightclub, where he's put under her hex. Over the final five issues, David must determine what's happening to his aspect, before the musical fates disappear his essence forever. 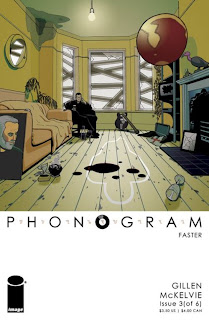 It's also very funny-- David's own coming-to-grips with his flaws and feelings is played for both pathos and laughs, and there's a lovely, eccentric supporting cast (including the social-climbing second-in-command of David's coven, his nobbish sidekick Kid-With-Knife, and an old, unreconstructed punk phonomancer who feels like what Greil Marcus or Simon Reynolds might have become if they couldn't write). I also loved Britannia herself--all bitchy mod entitlement--and her po-faced attendants, who quickly slug anyone who dismisses the Kinks. 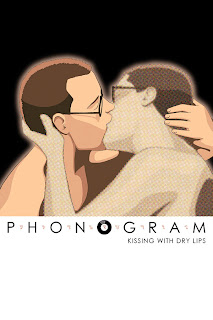 In the end, though, it's the reader who is the most important "character" in the book, and I've gone on a bit about fandom here because it is that mix (in all senses of the word) of text and reader that is crucial to the book's success. If you've never heard any Britpop (or have a real antipathy for the genre), Phonogram still works as a straight-ahead comedy/adventure/coming-of-age story. But as the original issue covers reproduced here suggest, you'll get a lot more out of it if you get the jokes and references, and figuring out what to do with those passions and memories is the creators' challenge as much as David Kohl's. There's a clear love for both Britannia and its phonomancer in these pages-- David is very much in the tradition of the irony-fueled Martin Amis ne'r do wells that Blur claimed inspired their seminal record Parklife (See? I told you these references were inevitable). But there's also a suspicion of those same qualities--David's coven leader rejects his call to save Britannia by mentioning "Britannia was a pretty, petty little sixties goddess. She was a paraochial, xenophobic bitch." 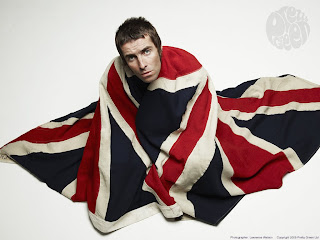 The split that resolves this tension, according to the authors, is between "retromancers"-- trapped in nostalgia, "that mass of pseudo-patriotic bollocks"--and phonomancing as a forward-thinking movement; indeed, to move here means not just dancing at a club (a constantly recurring image) but shifting your whole identity through pop magic. Or, in both discophilic and writerly terms, remixing it.

Phonogram is deliberately vague about how its magic works, and the few times we do see an explicit referencing of its ways (as in Britannia's temple, or the aging punk photomancer, or David writing out and scratching out a list of new musical aspects to choose that includes "radical poptimism"), the supernatural tends to be played for laughs. It's far more powerful to make the magic fleeting, keep it as a metaphor for taste and history and style, because that mixture of the clear and the muddy (or what we might call the lyric and the timbre) better captures what it feels like for the perfect pop single to wash over you, as something you feel rather than explicitly articulate. 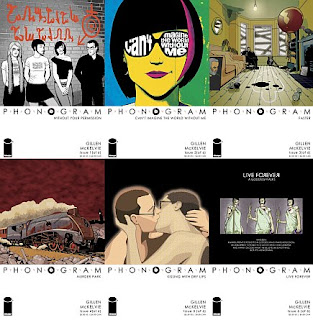 There have been many times in this post when I've accidentally typed "writer" instead of "reader," and I think that's McKelvie and Gillen's great magic trick: in the more active use spaces of pop music, DJing, comics and blogging, the reader is invited to be both creator and receiver of meaning, to remix and simulate the groove of the song on the comic book page and in his head. As we read, our pleasure becomes blurred.
Labels: Britpop Comics Pop Music Writing

dave said…
I read some great things about this elsewhere as well, so I think I'm going to have to check this out. I liked these bands but didn't listen to them enough to get the cover references (in all six cases, I had to look them up). Still, the concept is fascinating enough that I think I'd find the reading pleasureable even if I didn't recognize some of the references.
June 22, 2010 at 11:54 AM

Brian Doan said…
Dave, you should definitely check it out-- I think its combination of humor and magic would really appeal to you.
June 22, 2010 at 5:24 PM

sweets in bulk said…
Wow.. This is great! I can say that most of the blogs here are interesting to read. Anyway, thanks for sharing thoughts about Phonogram and I definitely visit this site more often.
August 12, 2010 at 9:58 AM