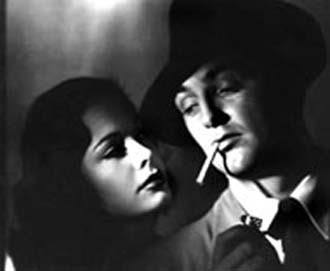 Last year, two of the web's best film bloggers, Self-Styled Siren and Marilyn "Ferdy" Ferdinand, organized a "For The Love of Film" blogathon, in order to raise funds in support of the National Film Preservation Foundation. This is an amazingly important cause for anyone concerned about film history and the literal stuff of movies; as Greg Ferrara noted last year in an ad for the blogathon, "Over 80 percent of all films made between 1894 and 1930 are lost forever." The yeoman's work done by Siren and Ferdy paid off-- they were able to raise $30,000 in support of the foundation, and as an added bonus, readers were treated to posts about early cinema from the superb bloggers who wrote in support of the drive. Ferdy and Siren (ably supported again by Mr. Ferrara and his tireless video/banner promotional work) are back with another blogathon that launches Monday: "For The Love of Film (Noir)" runs from February 14 through February 21, in order to help raise funds for the Film Noir Foundation. This group works to discover and restore lost or forgotten films from one of the most influential (and sheerly enjoyable) genres in film history. Or as their own self-description puts it:

The Film Noir Foundation is a non-profit public benefit corporation created as an educational resource regarding the cultural, historical, and artistic significance of film noir as an original American cinematic movement. It is our mission to find and preserve films in danger of being lost or irreparably damaged, and to ensure that high quality prints of these classic films remain in circulation for theatrical exhibition to future generations.

As a film professor, I feel an instinctive urge to support any group with preservation as part of their mission statement; that FNF leader Eddie Muller's group is specifically geared towards one of my favorite kinds of film just makes it all the more important to me. As a budding young cinephile, my imagination was shaped by the Humphrey Bogart of Casablanca and The Maltese Falcon; when I went to college and started taking film classes, it was often noir images that resonated deeply: Jane Greer walking in and out of shadows in Out of the Past; Bacall tossing a sexy glance sideways in The Big Sleep; Rutger Hauer bent over in the rain in Blade Runner and Jean-Paul Belmondo rubbing his lips together in Breathless (maybe the most seminal film experience of my life). And those are just the films we know, a handful of those that have remained popular or influential enough to stay preserved in the public eye. One of things that's exciting about FNF's work is the possibility of finding "new" treasures that haven't yet been canonized, new movies that will spark our imaginations and make us see this rich and complex genre in a new light. The film that the blogathon's funds will help restore-- The Sound of Fury aka Come and Get Me-- is one of those films, at least for me; I had not heard of it, but Siren's description-- "The Sound of Fury tells the same story as Lang’s celebrated 1936 Fury. Directed by Cy Endfield, who was fated to be blacklisted later on, The Sound of Fury stars Lloyd Bridges in as good a role as that fine actor ever got to play"--certainly whets my appetite.

Unfortunately, time doesn't permit me to contribute more than this post to Ferdy and Siren's crucial blogathon, but I urge others to read, contribute posts of their own (directions for doing so can be found here), and most of all, contribute to the Film Noir Foundation, which you can do by clicking on this link. As I noted above, Greg has been making some spiffy linking buttons, and as soon as I figure out how to get mine posted on the sidebar with the same link, I will get it up there, as well. Contribute early and often, and don't forget to read all week, as Greg, Bill, Leonard Maltin, Edward Copeland, Kim Morgan, Glenn Kenny, and many others offer posts that will wrap around you like a cloud of cigarette smoke, as stylish, rich and alluring as the films themselves.

UPDATE (11/13): Thanks to Marilyn Ferdinand and Greg Ferrara, who both offered helpful instructions, the "donate" button is up in the sidebar. Just click on the blogathon image and it will take you to the donations page for the foundation.
Labels: blogathons Blogging Ferdy on Film For The Love of Film movies noir Self-Styled Siren