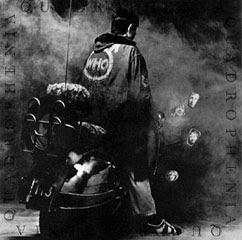 "What I do is force myself to do it by announcing things up front," Townshend admitted in an interview for the 1975 book In Their Own Words."Tommy, for example, I talked about at incredible length to Jann Wenner in a long, long article that Rolling Stone published before I'd even finished writing it. I said so much that it just had to be finished-- I had to get it done! I did the same thing with Quadrophenia. I announced it to everybody a long way ahead, so people started to build up to it. It's really good to do it that way, give somebody an idea. You can gauge your own enthusiasm. I mean it could be real genuine enthusiasm and involvement, or it could be an infatuation with an idea. So you can work it out by seeing how well you sell it to somebody else. And if you sell it really well you know that you're behind it. If you sell it to 50 people and you're still really up about it, then you know you're onto one that's going to get done."

-- from Won't Get Fooled Again: The Who From Lifehouse to Quadrophenia (2010), by Richie Unterberger.
Labels: Blogging Aesthetics mods Music Quadrophenia The Who