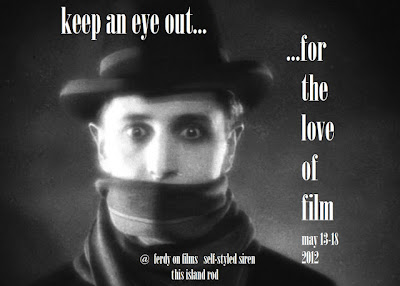 Am I the only one who loves movie previews almost as much as the movies themselves?

My parents were often bemused when, as a child, I would fervently insist we had to get to the theater on time, "on time" meaning before the previews started! Thirty years on, the presence of multiple media sources for film trailers has eliminated much of the anticipation of sitting in the theater, not knowing what might pop up on-screen; meanwhile, the tell-you-everything nature of today's previews often misses the point of the form's fun: I don't want to know everything, I just want to be thrilled and left eager for more (Christopher Nolan understands this perfectly, which is why his previews are sometimes better than his movies). Despite all that, I still get a little rush for previews at their best, when their compactness, elliptical imagery and simultaneous teasing of and pulling away from information can leave one happily wiped out (this past weekend's Super Bowl highlight was certainly not watching Eli Gump win another MVP trophy-- it was the seventeen-second, Whedon-fueled Avengers teaser, and its even-better one-minute online version).

This is all another way of saying that this post is a preview of the first true movie blockbuster of the coming summer-- the return of the For The Love Of Film Blogathon, organized once again by those titans of cinephilia, Self-Styled Siren and Marilyn Ferdinand. This is the third year in a row that these two fabulous goddesses have organized this event, to raise funds for film preservation and greater access to the classics, and each year the whole shindig just gets more impressive.

It's not just the multitude of superb writing on cinema that the blogathon always generates; it's the fundraising that results, and the extraordinarily vital work that the money funds. Two years ago, the blogathon worked on behalf of the National Film Preservation Foundation, the incalculably valuable folks whose many good works include the beautiful Treasures from the American Film Archives boxes; in fact, the two films the first blogathon helped to restore (The Sergeant and The Better Man)were just included in the Treasures 5 set of that series, released late last year. Last year's blogathon supported the Film Noir Foundation, "a non-profit public benefit corporation created as an educational resource regarding the cultural, historical, and artistic significance of film noir as an original American cinematic movement"; the blogathon raised more than $5000 from 159 donors to help restore The Sound of Fury, a lost noir from blacklisted director Cy Endfield.

This year, the blogathon is once again teaming up with the NFPF to restore, record a score for, and get streaming online, a little-known film from 1924 called The White Shadow. Its backstory is one, as Siren notes in that link above, of an ambitious assistant director, who slowly took over the production and began to make a name for himself-- and that name is why the film matters now. I hope you'll forgive the lengthy block quote, but I think it's best to let Siren take over the story here, like a stylish trailer voiceover:

In this case, we jump-cut to New Zealand more than 80 years later, where a cache of 85 films was discovered, repatriated and preserved by our pals at the National Film Preservation Foundation...

And, when they got to the bottom of the wrapping paper, lo and behold--three reels, or one-half, of The White Shadow, the movie Alfred Hitchcock was so energetically meddling with in 1924. After it was restored in New Zealand, the Academy of Motion Picture Arts and Sciences screened it in Los Angeles last fall, with a new score by composer Michael Mortilla.

What's that? you weren't at the screening? Neither was the Siren, now that you mention it. Heigh-ho, another great filmgoing party that WE MISSED. Let's call Brad and Angelina and see what they're doing Saturday night.

To get serious, one of the recurring motifs here at Self-Styled Siren is access--the continuing quest to see movies that remain frustratingly out of our reach. Our friends at the NFPF know how we feel, truly they do. They have streamed a number of the rescued films on their website, at no charge. It's part of their commitment not only to film history, but to bringing that history to as wide an audience as possible.

Streaming requires some serious lolly, however. In this case, it will take about $15,000 to put The White Shadow online and record the score. So, after asking our readers for their thoughts, the Siren, together with goddess Marilyn Ferdinand of Ferdy on Films and (for the first time this year) her intrepid partner from Down Under, Roderick Heath of This Island Rod, have decided to help the NFPF get The White Shadow out there on the Web, for four months on their site, free, for anyone to see.

I want to see it-- don't you? Alfred Hitchcock is probably my favorite director (or at least in some kind of cinephilic wrestling match with Jean Renoir and the acolyte they share, Francois Truffaut), and a good cause that allows greater access to his work is always worth supporting. Hitchcock himself once distinguished his work from that of his contemporaries: "Some films are slices of life, mine are slices of cake." It's precisely this split that is the NFPF's balancing act: their challenge is harnessing the resources of the everyday and overcoming the practical roadblocks of money, time, and footage in order to make those slices of cake as available (and tasty!) to as broad and long-lasting an audience as they can.

Which is why I'm previewing this event three months in advance. Yes, the blogathon doesn't start until May (click on that neat Rear Window image Roderick Heath made, up above the "about me" section of this blog, for more info), but it's never too early to start thinking about joining in, writing a post, mentioning it on Facebook-- and maybe even saving a few bucks to donate when the party kicks off. Like that long, long kiss between Cary Grant and Ingrid Bergman in Notorious, this year's "For the Love of Film" blogathon is certain to not only leave you edified, but swooning, giddy, and maybe just a little breathless.
Labels: blogathons Blogging Ferdy on Film For The Love of Film Hitchcock movies Self-Styled Siren