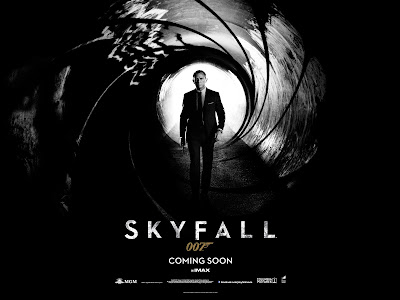 Action-packed, brilliantly acted, well-paced and wittily dialogued, and more sensual than any Bond film since the glory days of the 1960s (and perhaps ever), Skyfall is awesome in every sense of the word. After the disappointing nihilism of Quantum of Solace (easily the worst of all possible James Bond films), Skyfall is like the mind-clearing cold showers the character regularly took in the Ian Fleming novels: it's bracing, cleansing, and refocuses the series on all the tiny details that matter more than you might think. Asked by a villainous Javier Bardem what his hobbies are, Daniel Craig's Bond stares at him coolly and mutters, "Resurrection." No kidding.


When he was announced as the Skyfall director, Sam Mendes struck me as an odd choice: I hated American Beauty, admired Road To Perdition and enjoyed Away We Go, but it was hard to imagine Mendes staging action and finding the balance of comedy and drama that powers the best Bond films (even in our purportedly more "serious", post-Nolan age of action cinema). I needn't have worried: along with his regular collaborators, cinematographer Roger Deakins and composer Thomas Newman, Mendes has returned to James Bond that key element he's been missing for years: style. Watching the credits roll at the end of Skyfall, a friend suggested that every Daniel Craig Bond is a reboot: Casino Royale, most obviously, but Quantum, and this new one, too. I think I knew what he meant-- there is a sense of constant beginning in the Craig Bonds, that the character is always, as my friend described it, brought low and rebuilt. But this is also true of the Fleming novels, particularly the later ones from which the last three Bond films have derived so much of their existential tone: in Dr. No, On Her Majesty's Secret Service, Thunderball, and especially You Only Live Twice, Fleming's Bond is put through the physical and emotional ringer, and almost killed, until he is reborn anew in the next book. 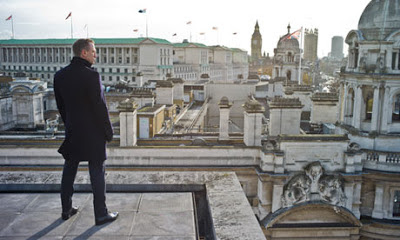 But I think something different is happening in the Craig films: it's an ongoing formal reboot of many parts, like a Voltron coming together to finally create the super-spy for a new age. Casino Royale was about rediscovering the character's essential humanity, the vulnerability he hides behind a blunt exterior ("I have no more armor," he says to Vesper Lynd towards the end of the film. "You've stripped it from me"). For all of its numerous failures, Quantum of Solace was very clear about Bond as a killing machine, offering the most purely action-oriented movie of the entire series (the action scenes are spectacular; the problem is that there's nothing around them). Skyfall is about the sensuality of Bond, the hedonism and delight in the materiality of the image that really made those 60s Bonds kick (the gadgets weren't central because they blew shit up, but rather because they were an arch parody of consumerist extremes). From the Tom Ford suits, to the neon-lit Shanghai streets, to luscious long takes and tracking shots, to the triumphant return of the Aston Martin DB5, Skyfall delights in making the screen shiver and pop; and far from distracting from Daniel Craig's natural ferocity, placing his professional assassin amidst this visual decadence only makes his tough guy all the more glamorous and alien. Whereas the Mendes/Deakins palette can sometimes overwhelm their other films, here it creates a setting in the jeweled sense: a gorgeous framework in which the story and action can shimmer.

The film is, like all great Bond movies, an endlessly inventive magpie of connections, references and borrowings: the rooftops of Batman Begins, the dangling sci-fi precipices of Blade Runner, the underground caverns of Indiana Jones and the Temple of Doom, the booby-trapped midnight houses of Patriot Games, and of course, the earlier Bonds, including a breathtaking visual quote from Goldfinger at the film's climax. Rather than distracting from the film's power, it only reminds you of how many other films the Bond series have influenced over the last fifty years, how rooted Bond's visual and narrative DNA have become. It seems appropriate that the film begins and climaxes with train imagery, taking us back to the earliest days of action cinema, and honoring and extending the legacy. 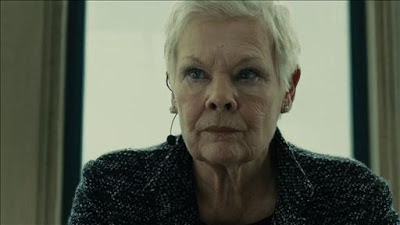 "Legacy" is central to Skyfall's narrative twists and turns, most of which center on Bond and MI6 as relics of a previous era of terror and diplomacy. On the surface, this seems an absurd motif for a recently re-booted series (and it's hardly new-- most of the Pierce Brosnan Bonds were about grappling with the character's image as a "misogynist dinosaur, a relic of the Cold War," as Judi Dench describes 007 in Goldeneye). But the film has the acting jobs to pull it off: although only 44, Craig has an old and lived-in face that suggests experience beyond his years, and he moves so intelligently on-screen-- timing and pacing Bond's slow recovery from a wound early in the film, suggesting both his run-down qualities and his desire to transcend fear--that he can sell the paradox of Bond as a cutting-edge anachronism. Judi Dench is unsurprisingly marvelous as M, making her seventh appearance as the character and always finding a way to shade sternness and disapproval so that it feels organic and surprising rather than cliched. 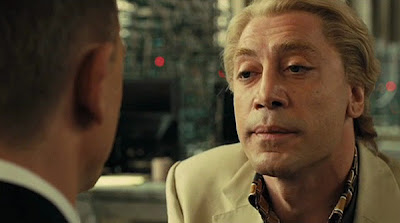 Javier Bardem's Silva is an eerie villain, with a rubbery face that suggests Peter Lorre and a bleach 'do that calls to mind David Bowie in his Let's Dance period: he's a turncoat spy as aging pop star, desperate for relevance and attention. Rory Kinnear's Bill Tanner and Ralph Fiennes' Mallory don't have as much to do as one might like, but they bring wit, tension and quiet professionalism to every scene, and the film sets up nice futures in the series for each of them. 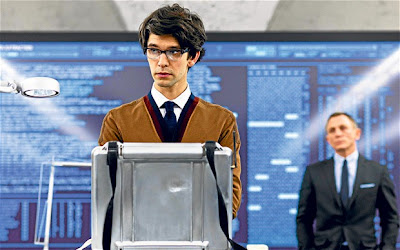 The younger characters are superb, as well: Naomie Harris' Monneypenny makes that character more interesting than she has ever been, and Ben Whishaw's Q practically steals the film: he's like a walk-on from the new Doctor Who, and his very English, stiff-upper-geek mannerisms play beautifully off of Daniel Craig's grunts and withering stares. 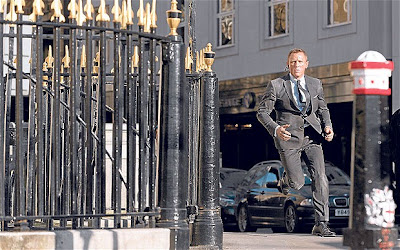 The most resonant character, though, might be London. Previous Bond films gave us brief glimpses of the city in establishing shots, usually just easily recognized signifiers like Big Ben (the exception is the brilliant chase down the Thames that dominates the pre-credits sequence of The World Is Not Enough). But in Skyfall, London dominates the action throughout. Under terrorist attack by a vengeful Silva, it anchors the narrative, and Mendes and Deakins delight in showing it off-- the Thames, the London Eye, Trafalger Square, the parks and gardens that contrast against the car-clogged city streets. From above-ground beauty, to the London Underground, to the spooky caverns that house the new MI6, London becomes an objective correlative for Bond's emotions throughout: it is simultaneously the anchor that ties him to his duty, and also everything he is fighting for. As beautiful as Turkey and China look in the film, London is its beating heart, and its smart depiction lends extra meaning to the quote of Tenneyson's "Ulysses" that climaxes the movie's action: as Bond races through the streets on foot, and Judi Dench authoritatively speaks of "One equal temper of heroic hearts,/Made weak by time and fate, but strong in will/To strive, to seek, to find, and not to yield," it feels earned and organic instead of tacked-on or pretentious. It's stirringly old-fashioned, and thrilling.

There's a tendency, in the responses to every new Bond film, to burn off what's come before, and declare the new man/director/approach a clean break with the past, or "the best ever." The triumph of Skyfall-- and the reason it really is one of the best in the series--is that it rejects the ahistoricity of that response, and uses the past to make Bond feel new again. On one level, Javier Bardem's Silva is exactly right-- there's something deeply anachronistic about James Bond, and his desire to heroically stand for Queen, country and his own sense of right and wrong. And there's something anachronistic about the pleasure Skyfall takes in it slower pacing, color-drenched camerawork and sensuous exploration of space. But those two-qualities intertwined make for something truly heroic, both as defender of MI6 and all the blunt pleasures that a well-crafted thriller can provide. 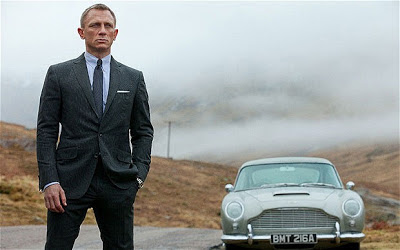