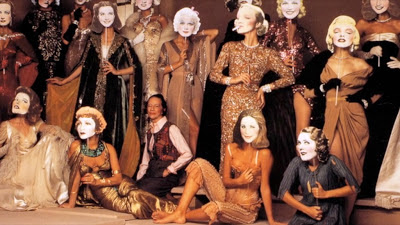 It's a shallow person who doesn't judge by appearances. The true mystery of the world is the visible, not the invisible.
--Oscar Wilde

Does it matter that Diana Vreeland could not have seen Charles Lindbergh fly above her house in The Spirit of St. Louis in 1927, as she claimed in an interview ("Right above our house! I considered that very lucky," she exclaims in archival footage, early on in Diana Vreeland: The Eye Has to Travel (2011)? Towards the end of the film, it's mentioned that Vreeland's home in Albany was nowhere near Lindbergh's flight path, a minor detail that Vreeland would write off as getting in the way of the "faction" that was her real Truth.

The Eye Has To Travel, co-directed by Vreeland's granddaughter-in-law Lisa Immordino Vreeland, relies on a spirit of faction (in all senses) as its structuring device, slyly deploying found footage, feature film clips, and actors reading transcripts to create a dialectic that both comments on and re-creates Vreeland's alluring fabulism, her desire to make words and images pulse for her audience, her need to tell a story that found the real in the glamorous. As much as any of the models she made famous in the pages of Harper's Bazaar and Vogue, Vreeland (who died in 1989) was a star-- first in her mind, then in the offices she shaped in her image, and eventually in the way that image shaped the overlapping worlds of fashion, art, and cinema. Taking over as Bazaar's fashion chief in 1936, she was famous enough by 1941 to be the inspiration for Kurt Weill and Ira Gershwin's Broadway musical Lady in the Dark; in 1957 she would be immortalized by Kay Thompson in Funny Face, and both celebrated and satirized a decade later by William Klein in Who Are You, Patty Magoo? She was a consultant to Jackie Kennedy, a compatriot of Cecil Beaton, and a friend to anyone who shared her love of artifice, clothing and stories.  "The eternal is in every case far more the ruffle on a dress than an idea,” Walter Benjamin noted in the mid-thirties (just as Vreeland was getting her start), and the success of The Eye Has To Travel is how well it blurs the line between fashion and criticism, in a manner that offers both needed perspective and witty sympathy for its lovable-but-generally-unreliable subject. 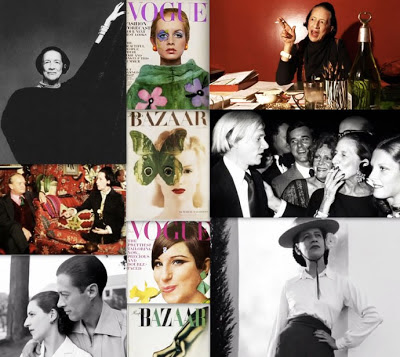 Writing in the early seventies, just as Vreeland was being fired from Vogue (and then hired by the Met as a consultant for their Costume Institute), Roland Barthes would offer a different cut on Benjamin's line: "One might call 'poetic' (without value judgment)," he wrote, "any discourse in which the word leads the idea." Numerous interview subjects in the film note Vreeland's unique use of the English language, her taste for anecdotes (photographer David Bailey tells a priceless story about Vreeland calling him before a shoot in Egypt, asking him to imagine a dead princess floating through the desert), her propensity for speaking, as one man says, "in haiku." It's an underrated way of working, particularly in academic and historical writing (indeed, Vreeland's harshest critics in the film are those frustrated by her lack of linearity), but it gets at the heart of so much that fascinates in the relationship between iconography and idea. There's a beautiful passage late in the film when Vreeland discusses her fascination with surfing, with the tranquil qualities of the water, and what it means to ride a wave (rhythm, as so many people note in the film, was very important to how she structured her page layouts). A writer or filmmaker faces the same question: how do you sustain the flow? If we replace "word" with "image" in Barthes' formulation above, the rhythms of The Eye Has To Travel become more apparent. 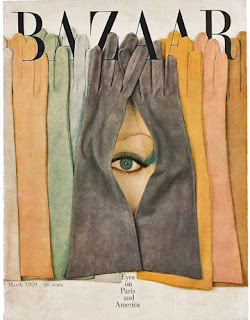 The Rolling Stones' "She's a Rainbow" plays over credits designed to look like a magazine layout, complete with panels containing the talking heads of Lauren Hutton and Angelica Huston (two of the models Vreeland discovered); it's clichéd and feels like a bad television news opening from the early 90s, and my heart sank a bit more when the performers (badly) re-creating the Vreeland/George Plimpton dialogues kicked in soon after. Everything felt a forced and silly. But slowly, the flow of talking head/found footage (everything from Bresson to Josephine Baker to Leni Riefenstahl)/still image/re-creation became marvelous, in the Surrealist sense.  Gathering Vreeland's memories around the images of popular culture that surrounded her (and that she would eventually shape herself) is a strong way of draping the editor's print-the-legend stories with the necessary amount of irony: it provides the distance paradoxically needed to get deeper into her truths (Barthes himself, in The Fashion System, noted the difference between "garment" (word) and "clothing" (image), two related-but-different codings of the icons that surround us).  There's always a twinkle in Vreeland's eye as she speaks in the interview segments, as if she's well-aware of how she's spinning a tale, and how you are a sucker for taking it at face value. And why would you, when there are lovely alternatives in artifice? At one point, in a very Barthesian aside, she notes that she knows nothing of "Russians," but is fascinated by "Russia"-- it's a site of meaning pulsing outward for her, as much as an actual place.For Vreeland, the world was something to be styled, just as she constantly restyled her family history, her life in Europe, her time in the spotlight.

Popularizing blue jeans and bikinis, dressing First Ladies, discovering three generations of models and actresses, internationalizing fashion journalism, and transforming the meaning of layouts from prim suggestions for suburban wives into pages full of sensual stories, Vreeland's accomplishments are impressive (the film is lush with dazzling Bazaar and Vogue covers, and page spreads that are a fashionista's delight). The film that frames them is by turns fascinating and interminable, offering a blend of insight and distraction that I can only describe as deep ephemerality: I was mostly absorbed for its eighty-six minutes, and it almost immediately began to float out of my memory as David Bowie sang "Lady Grinning Soul" over the closing credits. But the wave it creates and sustains made me hungry to know more about her. She relates an anecdote towards the end of the film, about seeing Diaghilev and Nijinsky in Paris as a girl, and she might be describing her own, fabulous life: "We knew it was amazing. Because it was so amazing, it appeared amazing. Not all things that are amazing appear, perhaps. You know?"
Labels: Anecdotes Bowie Diana Vreeland Fashion film criticism Harper's Bazaar Lindbergh movies Oscar Wilde Roland Barthes Surrealism Vogue Walter Benjamin