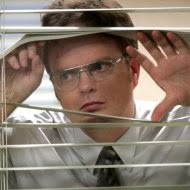 A dreamscape, early this morning...

I am a part of the cast of The Office. Dwight is angry because David Denman (the guy who played Roy on the show) gave a web interview where he talked about what a "mundane," uninvolved director Rainn Wilson was for one of the episodes (there's a lot of toggling between actor and part in this dream).  He starts yelling, and says he's going to have a duel with Denman in the parking lot over this. "He called me a coward!," Dwight/Wilson yells (even though that's not true. But as in many dreams, what's not true feels true). Everyone tries to talk him down from his madness (including office manager Brian Eno, who suddenly has very long, stylish, Ferryesque hair), but to no avail. I intervene almost despite myself (Dwight and I don't get along at all, and I don't have a lot of time for Rainn Wilson, either). "Dwight, we've known you for nine years!," I yell. "He's known you for, what, like three days a year out of the season?"

I wake up yelling this, and close my eyes, and for the next hour, find myself sleeping and waking, moving from my bedroom to the shifting landscape of Scranton. My attempts to keep Dwight from shooting himself and others suddenly turns into a boy playing with a toy jet plane, and suddenly that boy is on a United Flight so sleek I can taste the metal of the jet's exterior. And I'm on the flight, too, sitting in a transport pod, waiting to be shot down to Hawaii ("Brian Eno is the best Dad ever," a co-worker and I say to each other simultaneously). The first thing I see on the island, through my pod window, is HR manager Toby Flenderson sitting on the beach in an alarming pair of cargo shorts, munching on watermelon. Several scenes of corporate frolicking (including tubing, swimming, and tanning) unfold, and then it's time to go home. When I return to Scranton, the office is redesigned like a tiki hut restaurant, and everyone titters as I walk by. There are several asides about what I said and did when I was drunk in Hawaii. I remember none of this, but get increasingly annoyed at everyone's jabs (and their unwillingness to tell me what I did. Apparently, there's even a video of my misdeeds, but I never see it).

The last straw comes when I can't pour coffee (the cups keep changing size, spilling the too-thick liquid everywhere; the sugar is like marshmellow): I say, "I've been here long enough." I storm out of the building (morphing into John Krasinksi as I do so) get in my ten-foot maroon pick-up truck, and peel out of the parking lot. Oasis' "Champagne Supernova" plays on my dream's soundtrack, as I mutter, "Brian has left the building."
Labels: Brian Eno Britpop Bryan Ferry Dreaming Oasis Random Oddness The Office TV