Point Break (1991) is all about disguises, identities, doppelgangers-- so what might we learn by comparing the trailer for its remake (seen above), with the trailer for the original Kathryn Bieglow film, as seen below?


To call the new film a "remake" is to define that term with even more looseness than Red Hot Chili Pepper Flea displays in the '91 original. For surf's sake, it doesn't even have the good sense to be coming out in the summer! For those who haven't seen the original, the Keannu Reeves/Patrick Swayze film details the adventures of Johnny Utah, an FBI agent who goes undercover with a group of rogue surfers (led by Swayze) who the Feds suspect are secretly a gang of bank robbers known as the "Ex-Presidents" (so called because they do their criminal deeds while wearing rubber masks of Nixon, Reagan, Carter, and other former Chief Executives). 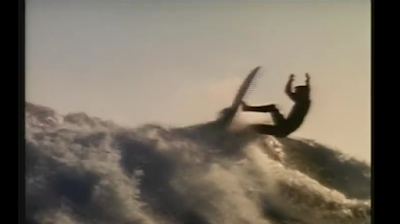 Under the spell of the waves, the power of the boards, and the homosocial glow of Swayze's perfect locks (this is the sweet, underrated actor's peak), Reeves' Utah begins to question not only his job, but the very nature of law, society, and What It Means To Be A Man (it's that kind of movie, but that's not all it is).

The new film looks to jettison the '91 version's California glow in favor of Nolanesque grays, stark black/white contrasts (in all senses), and faux-art film shadows whose dankness is matched by the exposition-heavy narration.

Do yourself a favor and re-read the plot summary of Point Break '91 above, and try not to laugh, or at least smile with the knowledge that there's some degree of self-aware pleasure in the movie's bald-faced embrace--then transformation--of genre clichés. The film's whole plot is a self-aware commentary on action movie staging-- we're invited in early on how robbing a bank is like shooting an action film (setting up, blocking, enacting the deed, and then getting a rise out of your scared crowd). 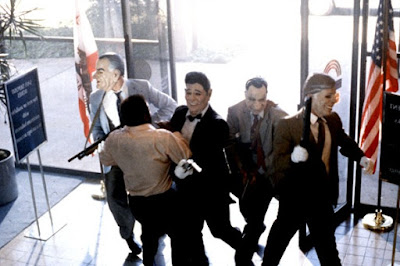 Bigelow is so gifted at it-- with the best eye and sense of pacing of any action director of her generation-- that the bank sequences feel less like narrative devices than Surrealist ballets of color, movement, blur and smoke. And once you get on that wavelength, the film feels both very funny, and almost worthy of the ham-handed Zen koans in its script (the writing sometimes doesn't know what it's saying, but Bigelow and her game cast transform it into floating tableau of unspoken meaning). 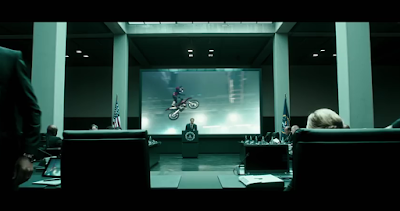 By contrast, the trailer for Point Break '15 grasps its self-serious plot points like its snowboarders hold onto their boards in the clip's mountain shots. To crack a smile, or even take a pause for one of those recurring shots of waves that punctuate the '91 trailer like a deep breath, would be to give up the whole game. It's entirely possible, of course, that PB '15 will be an action classic, and that this trailer has deeply misrepresented its movie's aesthetic. But somehow, I doubt it. From the extreme sports references that felt dated even back when Vin Diesel employed them in the regrettable xXx (2002), to the emphasis on the Machinery of the State in the mise-en-scene (take a look at how visually dominant and heavy the governmental briefing room is in the 2015 trailer, versus Bigelow's human-centric use of close-ups and medium shots in the police room shots of the '91 trailer-- the films are a contrast of emphases, Object versus Subject), to the way the score works hard to cue you that Something Momentous Is Happening Here-- this is an echt post-Dark Knight action trailer, with all of the Batman films' melodramatic portentousness, but no sense of how those Bat movies self-awarely used that portentousness to their own rich ends. It's stuffed, drab, and dire, a beach party thrown in the rain. 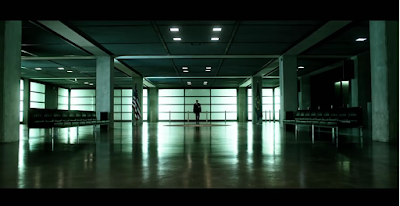 In the game of Bingo (if not Beach Blanket Bingo), there's something called "Free Space," often in the card's center, which is automatically filled when a player is trying create a row, column or diagonal. If we riff on that term for a moment-- both as a visual construct, but also a connection between audience and movie--Point Break '91's aesthetic becomes a bit clearer. For all of its "100% pure adrenaline," to quote Swayze's character, the movie is as much about the spaces between its gorgeously staged action, as it is about the action itself. Again, the punctuating waves in the trailer are Bigelow's giveaway, her signature-- look at how pretty they are, how meditative, and then think about how the montage in the second half of trailer only slightly recalibrates that same gesture of action/silence/action/silence (the ex-President's contrasted with that lovely two-shot of Keannu and Lori Petty in the dark on the beach, for instance). The movie trusts us to understand its basic set-up, its stock characters, its shorthand referencing of a history of heist films. That's the "free space" it borrows from the audience, in exchange for the visual poetry its free spaciousness provides us for its 123 minutes. What happens when the mechanics of the blockbuster are flipped upside down like the movie's skydivers, when the moments of punch/explosion are just the MacGuffins to get us to the pretty exhale of Point Break's pauses?

Point Break '15, on the other hand, is Hard Way Bingo (in all senses, I suspect)-- in the game's terms, a straight line without the use (or, to shift the tone a bit, the benefit) of any free space. Between the sun-kissed beaches of 1991 and the ultra-macho Manichean cliff peaks of 2015 lies a whole tale of transformation-- not so much vaya con dios as just a con. 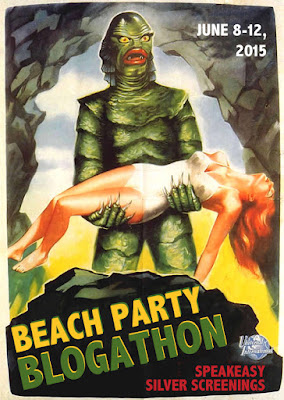 Silver Screenings said…
That's an interesting point you made, about staging a bank robbery and how similar it would be to shooting an action film.

Point Blank is normally a film I would never even consider watching, but your review has sold me on it. I liked the philosophical points you discussed re: 1991 version. I think I'll give it a go.

Brian Doan said…
Thanks! I'm really glad you enjoyed the post, and appreciate your kind comments. POINT BLANK is great, and I highly recommend it as a fun summer film!
June 12, 2015 at 11:19 AM

Kristina said…
Glad to see you might have sold it to another viewer! I love POINT BREAK, great action and always fun to go back to. Bigelow did such a great job with it and I'm glad you covered it for the blogathon, thanks for joining us!
June 12, 2015 at 12:04 PM

Anonymous said…
The original Point break is a guilty-pleasure classic, it's inconceivable that anyone would consider a remake. If it ain't broke, don't fix it - well that's my motto. I guess it's been around for quite a while and anything with such an enduring appeal is ripe new revenue!
June 13, 2015 at 12:08 PM

Brian Doan said…
girlsdofilm-- I agree that a remake seems like a bad idea, since so much of the original's fun comes from it's playful tone, rather than its plot.
June 13, 2015 at 2:35 PM