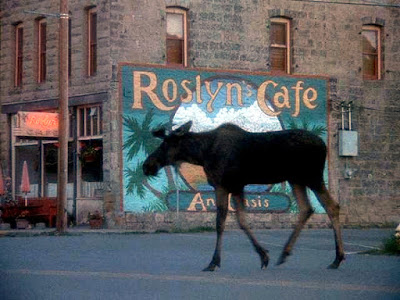 Who are any of us? Are we one person fixed at birth or do we grow like a snow ball coming down the mountainside of life? Or can we change? Shed our skin? The caterpillar becomes the butterfly, leaving the remains of his former self behind. I look at my yearbook photo, class '81, and I wonder who that stranger is. Damn if I know, maybe that's the point, maybe we are not supposed to know, maybe that's what this earthly joyride is all about. Like Robert Frost said 'We dance around the ring and suppose, but the secret sits in the middle and knows."
--The wisdom of Chris Stevens, poured out over the airwaves of KBHR, Northern Exposure

On July 12, 1990, an eight-episode summer replacement series about a New York doctor displaced in a quirky Alaskan town debuted on CBS. No one expected much of it, but when it left the air on July 26, 1995, Northern Exposure had launched several careers, won multiple Emmys and Peabodys, and stretched the boundaries of style, tone and genre in ways that outlined the future of television. I remember the series and explore its influences in a piece up at RogerEbert.com.