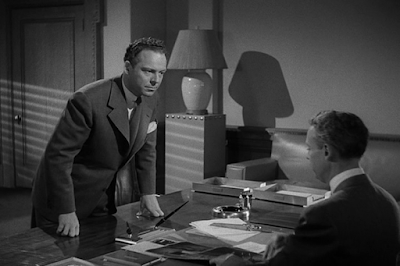 From No Time For Love (1943), an example of how well Mitchell Leisen deploys his designer's eye and subtle wit as effective counterpoint. The character on-screen rails against his star photographer (Claudette Colbert) going on assignment backstage at the ballet and only photographing objects, not dancers; meanwhile, Leisen arranges his props and lights to do the same thing, drawing our attention away from the ranter and towards the shadow cast by the lamp, which further draws our eye downward to the way bolts of light create "stripes" across the dresser it sits on, which pulls us leftward, further into the lines of light across the office door. A foolish editor is framed, in all senses, by his director, and aesthetics triumphs over the mean logics of plot.


It's the opening salvo in a wartime comedy that upends gender roles (a Leisen constant); has enormous fun with set design, mobile framing and the playful arrangement of sweaty bodies in spaces above and below ground; and creates a delirious tone so tied to its ever-shifting visual patterns (which look like Steichen in the penthouses above ground, and Eisenstein in the NYC underground) that one might almost call it Pointillist Screwball: all the elements we'd expect from the genre, densely layered in a manner that shows off the artist's hand, while simultaneously creating a rich, intense pleasure. It also provides another great showcase for Fred MacMurray, whose blend of charm, darkness, playfulness and potential violence Leisen had scoped out a decade before Billy Wilder got ahold of him for Double Indemnity.
Labels: 1940s Classic Hollywood Claudette Colbert Eisenstein film criticism Fun WIth Images Mitchell Leisen movies Quick Takes screwball