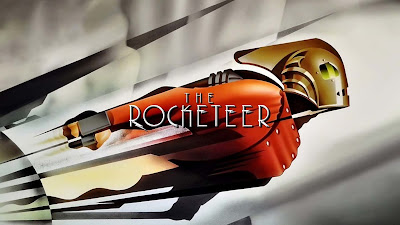 "I’ve bought a ticket in a lottery, the grand prize of which amounts to this: being read in 1935."—Stendhal

Released 25 years ago this month, The Rocketeer—director Joe Johnston and screenwriters Danny Bilson and Paul De Meo’s adaptation of Dave Stevens’ acclaimed indie comic—was pitched as Disney’s second attempt (after the previous year’s equally stylized, period-set Dick Tracy) to compete with Batman, after that film stormed theaters in 1989. It had rising stars like Billy Campbell (making his film debut after gaining good notices for work on TV shows like Crime Story and Dynasty) and Jennifer Connelly; a marvelous villain portrayed by the most recent James Bond, Timothy Dalton; well-regarded character actors like Alan Arkin, Paul Sorvino and William Sanderson in key supporting roles; a screenwriting team who’d just show-run a well-received adaptation of The Flash for CBS; and a director coming off the surprise hit of Honey, I Shrunk The Kids. The gorgeous, painted Art Deco poster captured the look of Stevens’ comic brilliantly for longtime fans, while grabbing the eyes of those (like 18-year old me), who’d never heard of the Rocketeer in 1991, but were certainly curious to see what this flying helmeted man was all about.

But the film failed to take off that year, garnering good reviews but doomed by a summer scheduling that dropped it smack-dab between the season's two biggest hits, Robin Hood: Prince of Thieves and Terminator 2. It sunk at the box office, and only found commercial success later on home video. And yet, looking at it now, its retro optimism feels like a road-map to the future, a presaging of precisely the blend of action, wit, nostalgia and pathos that drives the Marvel blockbusters currently dominating the marketplace (released, ironically enough, through parent company Disney). Like Stendhal, resigning himself to contemporary failure in order to find posthumous glory, The Rocketeer has outlasted Costner and Ah-nuld as a model of all-ages action filmmaking.

Over at RogerEbert.com, I take a long look at the movie, its genesis, and the lasting impact of its retro vision on contemporary pop culture.  I'd be grateful if you'd give it a read, and even happier if you'd take a look at the the film-- I assure you, you won't regret getting caught up in its tailwind.