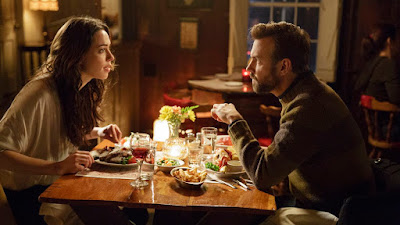 There's a sadness, an ache both acknowledged and unacknowledged, in Tumbledown (2015), the story of the pained interactions between Hannah (Rebecca Hall), a widow whose husband Hunter Miles was a punk-turned-folkie cult icon, and Andrew (Jason Sudeikis), a pop culture academic who turns up in her Maine hometown to work on a book about the late musician.  This sadness isn't readily apparent in Tumbledown's first 30 minutes, which veer uncomfortably between melancholy and a kind of forced quirk, as if the movie can't decide whether it wants to follow the path of an painfully observant family dramedy like Rachel Getting Married, or the ain't-small-town-folk-wacky (but oh so wise) tone of...well, take your pick of the many, many rom-coms that have used that template in the last 20 years. If we think of the movie as a pop song, that quirk is its production sheen, layered on with all the subtlety of Phil Spector going through the Let It Be tapes. This grates, because we can hear the delicate relationship between melody and harmony underneath that sheen-- or rather, we can see it.

When the writing stumbles, and the direction occasionally makes regrettable choices, what Tumbledown has is its cast, singing and playing and finding changes on chords familiar and unfamiliar. They are the movie's timbre, the place where the magic really exists, beyond the banality of the lyrics and repetitive choruses. We hear the notes when Hall twists her waist and shrugs a shoulder while simultaneously turning her head in the opposite direction, her body expressing the jumble in Hannah's head as much as the musicality of her tossed-off mumbles. We hear them in Sudeikis, whose confident snarkiness as Andrew feels so movie-familiar early on (Sudeikis uses a cocked head like a weapon), but ultimately acts (in Hannah's words) as an "exo-skeleton" he sheds to reveal wounded anger. We can hear it in the interplay between Hannah's parents (Blythe Danner and Richard Masur): Danner feels like she's chewing the scenery, until the narrative reminds us of how much that over-doing covers up, while Masur does just the opposite, his underplaying and dry wit drawing us in, only to bite like a cobra. It's there in Griffin Dunne's warm bookshop owner, with his anxiety-ridden sighs, and it's there in the underused Dianna Agron, as Andrew's music industry girlfriend, Finley. Agron's not in in the film nearly enough, but when Andrew interrupts a dinner party conversation to play a Hunter Miles song (on vinyl, of course), Agron's face becomes a frozen smile, her eyes get a faraway look, and her hand subtly-but-impatiently shakes her wine glass, as if she's experienced this kind of Hunter seance many times, and just wants to get through it again with her patience intact. It's a brilliant little moment, and it makes you want to know more about Finley, and why she's put up with this for so long.

"Putting up with" is the problem/curse/balm that all of the characters are grappling with in their own ways. "I'm just here for everyone to work through their issues on," Andrew exclaims, with a by-then familiar form of charming passive-aggression, but he's not wrong. Underneath its unresolved romanticism about pop music martyrs and the Curse of Elliot Smith (who, along with David Foster Wallace and Jeff Buckley, the film incorporates into a litany of too-young dead artists, as if longing to diffuse potential criticism), Tumbledown is actually about the unresolved rage of family dynamics, and all the guilt, resentment, love, and longing that fuels them. No one knows exactly how or why Miles-- found dead from a presumed fall at the bottom of a mountain--died at the moment and in the way he did, and even questioning its accidental status is taboo. Everyone in Tumbledown is using everyone else-- for catharsis, for career advancement, for the "next stage" in their presumed personal arcs (in one rather remarkable scene, Danner's Linda sweetly-but-bluntly informs Hall's Hannah that she expects a grandchild from her because she's experienced "all the other juicy stuff in life" and doesn't want to be denied this final thing).  They often use unknowingly, but it's no less devastating for that, and often so quick and casual that its impact only occurs to you later, as you turn the movie over in your head. Every character has their turn at truth-telling, even as they simultaneously use their declarations to lie to themselves. Homilies about life and energy carry with them a heavy dose of irony, like they're shibboleths repeated in desperation. Some of the lying is intentional, and some is not, and the film is wise to leave much of its impact hanging in the end (even the kiss that closes the movie is beautifully tentative, a literal pause between lean-in and lips undercutting the genre's normal sense of triumph). But it's in those moments of quiet exchange, as the film slows down to let the everyday in, that Tumbledown really sings.