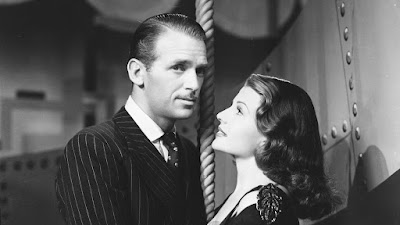 Charles Engle (John Qualen)'s employer looms over him, enveloped in Expressionist shadow, dominating the screen via his eerily opaque glasses and large body, even if he's ostensibly in the background of the frame. He accuses Charles of embezzling $3000 from the company and talks of Charles' failed marriage, his tone a mix of anger and mournfulness, at a friendship betrayed, at a cuckolding of Charles that the embezzlement gives an air of schadenfreude. Charles denies nothing-- all the accusations are true--and stumbles out into a rainy New York night, to complete the suicide he's announced in a note in his overcoat pocket.

But he doesn't jump in the river; instead, a bit dazed, he stumbles into something far deadlier-- a ritzy nightspot with the slightly on-the-nose name of the Pigeon Club. His ennui and fatalism cause him to overtip everyone, drawing the eye of con man Bill (Douglas Fairbanks, Jr.), who sees him as his next mark. Meanwhile, failed playwright Gene (Thomas Mitchell) and aspiring actress Nina Barona (Rita Hayworth) join Bill and Charles at one of the club's tables, the mise-en-scene full of odd, constructivist art of cityscapes, that look like hills the characters could slide down. And that's when it all gets really interesting. 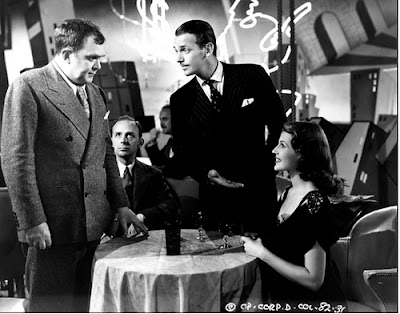 Angels Over Broadway (1940), written, produced, and directed by Ben Hecht (with a separate "co-direction" card for the film's cinematographer, the great Lee Garmes) is marked as a noir, and in many ways it is-- the fedoras, trench coats, rain and jazz clubs give it the proper atmosphere, and its blend of crime and existentialism certainly looks ahead to the narratives and tones of the late 40s. But it feels less like a genre piece than a space for Hecht to explore poetic flights of fancy, letting his characters overtake the narrative with lush, jazzy digressions on life, art, love, and fate-- before the story snaps them back into the kind of cynical patter that Hecht was also the master of (my favorite moment in this regard is his meta-playful introduction of Hayworth's character, referencing and reversing the actress's real-life background in a conversation about acting and deception: "I'm Russian, but this year Latin is in"). This push-pull between hard-boiled realism and a dream logic both verbal and visual (the film is full of gorgeous black-and-white patterns and busy backgrounds) makes Angels Over Broadway seem less indebted to Hammett than to Rene Clair, and to the poetics of '30s French cinema (I half-expected Fairbanks-- who's brilliant here as a tough guy who's not as nihilistic as he hopes--to turn to Hayworth and tell her that she reminded him of the Metro). 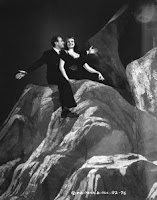 There's a beautiful moment when Hayworth-- touching throughout--dances playfully on an abandoned Broadway stage, imagining herself the star of a show that no longer exists. It's the kind of lovely, character-driven punctuation the film is full of, and in many ways it acts as the movie's signature-- she knows it's fake, that her life is harder and differently shaped than that. But for that moment, the dream is real.
Labels: 1940s Angels Over Broadway Ben Hecht Douglas Fairbanks film criticism French Poetic Realism Jr. movies noir Rene Clair Rita Hayworth Thomas Mitchell