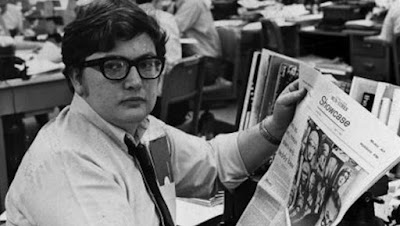 Today is the fourth anniversary of film critic Roger Ebert's death. In remembrance, I'm posting my remembrance of his impact on me, an essay which originally ran at the now-defunct film site Cinespect, on April 6, 2013.


I had been expecting it. He hadn’t posted a new review to his website in a while (as a group of talented critics pinch-hit in his stead), his Twitter feed had slowed down, and a statement issued two days earlier felt less like a retirement announcement than like his own elegy—but Roger Ebert’s death on Thursday still hit me like a thunderbolt. I never met Ebert, never had an online exchange with him, and in recent years I would sometimes read his movie reviews in disgust or dismissal—how could he be so wrong, I’d think? Thirty-five years after Ebert and Gene Siskel’s Sneak Previews first started showing up on PBS stations, years after I’d discovered Andrew Sarris and Pauline Kael, Manny Farber and James Agee, André Bazin and a host of academic film specialists, Roger Ebert sometimes felt like a relic from my cinephilic adolescence. He was someone I appreciated but no longer felt a connection with, and perhaps even felt a little embarrassed about.

As Will Leitch said in this excellent piece, three years before Ebert’s death: “We were all so, so stupid.” Because when the news came down, via Facebook, all I wanted to do was cry, scour the web for responses, and reconnect with his writing, that inimitable blend of poetry, wit, and reportage that he deployed in his reviews and essays. Maybe it was a subconscious form of penance for not taking him as seriously in the last several years, or simply a moment of recognition, shock burning away the cynicism: You want to return to that long-dormant critical conversation with the person you’ve only met in the space of the prose.

Ebert became a film critic at 24, when his editors at the Chicago Sun-Times handed him the beat in 1967. It was not a lifelong dream—he simply wanted to work at a newspaper, and maybe “become a columnist like [Mike] Royko.” He carried that clear-eyed reporter’s eye with him into the movie theater, and found a way to blend its observational skill with a slangy first person voice and a catholic taste, just as American movies entered another golden age (and a renewed interest in film criticism opened up media possibilities for someone savvy enough to recognize the opportunity). This confluence of talent, timing, and technology made Roger Ebert the most powerful film critic in America, but the outpouring of eulogies, remembrances, Facebook comments, and tweets over the last two days suggests he was also the most beloved. In his memoir, Life Itself, Ebert writes of the impact of blogging on his life and voice: “It pushed me into first-person confession, it insisted on the personal, it seemed to organize itself in manageable fragments…They come pouring forth in flood of relief.” It’s a striking admission from a man who was never afraid of putting his personality into his reviews, who was fond of quoting Robert Warshow’s edict that “A man goes to the movies. The critic must be honest enough to admit he is that man,” and its open tone indicates that lifelong bond with his readership.

I was eight when I discovered Sneak Previews, the national version of Coming Soon to a Theater Near You, the local PBS show Siskel and Ebert had started in 1975; I remember sitting impatiently through reviews of My Dinner With Andre and  On Golden Pond—boring grown-up stuff—in order to get their thoughts on far more important movies like Raiders of the Lost Ark and Superman II; that they could speak with intelligent sympathy about such a diverse range of films was my first introduction to how broadly a love of cinema could stretch. In subsequent years, as they hosted their own “Oscar picks” shows, or fearlessly dissected each other’s opinions (with great snark, as many have noted, but also a real cogency that distinguished them from the host of cover band tele-critics that followed), a whole style of thinking opened in front of my young eyes: You could argue about art, not as a form of put-down, but as an expression of love. That might seem banal, but to a movie-besotted Midwestern kid in the early ’80s, seeing this play out on television was a primal moment, and it led me to a more important discovery: Ebert’s prose.

Ebert won a Pulitzer in 1975 (the first film critic to be so honored), but the success of his TV show that same year meant that millions would know him for his thumbs more than for his Sun-Times reviews. But for me it was the writing that was the most exciting: Devouring his Movie Companions, his Film Yearbooks, and his fantastic essays and interviews was a way of learning about film style, canons of taste, and what it meant to be a grown-up. Ebert’s compressed poetry evoked the space of the film, the world he brought into the theater, and the experience of seeing in what felt like real time. There was something tactile about his style, how the compact form of a newspaper review shaped a muscular, evocative voice that could call up a sensation in just a few words. Writing of La Dolce Vita, Ebert unwittingly described my own experience of his work:

Movies do not change, but their viewers do. When I saw “La Dolce Vita” in 1960, I was an adolescent for whom “the sweet life” represented everything I dreamed of: sin, exotic European glamour, the weary romance of the cynical newspaperman. When I saw it again, around 1970, I was living in a version of Marcello’s world; Chicago’s North Avenue was not the Via Veneto, but at 3 a.m. the denizens were just as colorful, and I was about Marcello’s age.

When I saw the movie around 1980, Marcello was the same age, but I was 10 years older, had stopped drinking, and saw him not as a role model but as a victim, condemned to an endless search for happiness that could never be found, not that way. By 1991, when I analyzed the film a frame at a time at the University of Colorado, Marcello seemed younger still, and while I had once admired and then criticized him, now I pitied and loved him…There may be no such thing as the sweet life. But it is necessary to find that out for yourself. 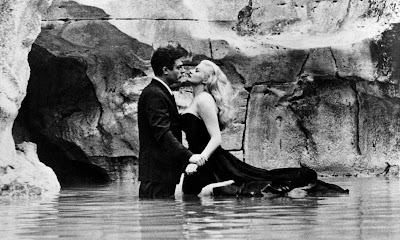 He could also be funny and anecdotal, as in this passage from his review of  The Lonely Guy (1984), where getting into the theater sounds more interesting than what he finds there: 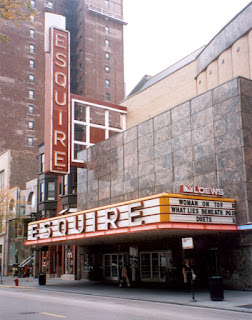 I walked up to the ticket booth of the Esquire theater and with a flourish presented my Plitt Theaters pass.

“What’s this?” asked the ticket person.

“A pass to the Plitt Theaters,” I said.

“I don’t know,” the person said. “I’ll have to phone and check it out.” I turned my back to the wind until the pass was verified, and then walked into the theater’s priceless and irreplaceable Art Deco lobby, which cheered me somewhat.

“It’s a shame they’re tearing this theater down,” said a young woman to her date, as they swept past me on their way to the street. I ordered a box of popcorn, and went into the theater.

But it was in his raves that he was the most blissful, creating a desire for the movie that was insatiable. Here he is on Five Easy Pieces:

At the outset, we meet only the man — played by Jack Nicholson with the same miraculous offhandedness that brought “Easy Rider” to life. He’s an irresponsible roustabout, making his way through the oil fields, sleeping with a waitress (Karen Black) whose every daydreaming moment is filled with admiration for Miss Tammy Wynette. The man’s name is Robert Eroica Dupea. He was named after Beethoven’s Third Symphony and he spends his evenings bowling and his nights wearily agreeing that, yes, his girl sings “Stand By Your Man” just like Tammy.

In these first marvelous scenes, director Bob Rafelson calls our attention to the grimy life textures and the shabby hopes of these decent middle Americans. They live in a landscape of motels, highways, TV dinners, dust, and jealousy, and so do we all, but they seem to have nothing else. 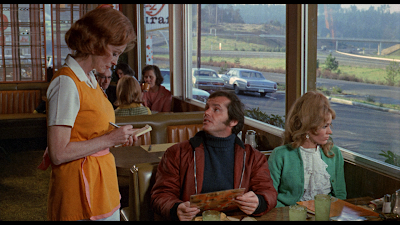 Thrust into his new job in 1967, Ebert quickly boned up on movie history and film criticism—Sarris, Dwight MacDonald, Agee, Kael–but he used what was around him to quickly forge his own style, and adapt it to the spaces of a mass readership. That’s not as easy as it sounds. Absent the spatial luxuries of The New Yorker, or the cultural prestige of The Village Voice or The Nation, Ebert was a fascinating hybrid, writing for newspapers with the soul of a cinephile. He was open to the New Cinema of Hollywood in the ’70s and the influx of international cinema in the same period, as well as popular genres, American independent films, and (especially) documentaries. He found a voice that could straddle and respect the needs of each, and then crafted a conversational mode to replicate it on television, on blogs, and on Twitter, never losing the thread. It was a breakthrough achievement, opening professional doors and creative possibilities for every popular media critic who followed in his wake.

It seems notable that Ebert was, before his days at the Sun-Times, a doctoral student in English: Where Kael uses the first person to convey her almost physical desire for imagery, and Agee as a way of working out the poetics of cinematic narrative, Ebert’s prose suggests a teacher, guiding us through the film and conveying enthusiasm, while always keeping an eye on the broader contexts of culture, audience, and response. He organized “Ebertfest” (spotlighting forgotten films), led film students through shot-by-shot viewings of a single film, and hosted panels at the Telluride Film Festival; he also had public and very contentious arguments with other critics about the merits of films like Crash (2005). But underlying it all was the desire to share, to key you in to why he felt something worked or didn’t—that balcony on Sneak Previews was a metaphorical gathering space as much as a set.

It’s been a hell of a decade for cinephilic loss. Since 2001, Kael, Sarris, Sontag, Farber, Robin Wood, and so many others who taught us how to see have departed (could someone check on Jonathan Rosenbaum, please?). Ebert came at the tail end of the moment those earlier writers helped create, but also extended into so many spaces of new media that he feels like the avatar of an endless critical future. Writing of the Wim Wenders film The American Friend, Ebert noted, “He challenges us to admit that we watch (and read) thrillers as much for atmosphere as for plot. And then he gives us so much atmosphere we’re almost swimming in it.” He might have been talking about his own reviews. Perhaps the best tribute to Roger Ebert’s movie love is to pick up its manageable fragments, and imagine new spaces in which to continue the conversation.
Labels: film criticism memory movies Obits Roger Ebert TV Writing

Digital Marketing Services in Delhi said…
I recently came across your blog and have been reading along. I thought I would leave my first comment. I don't know what to say except that I have enjoyed reading. Nice blog.