New From Me: PARTY GIRL and THE SPY WHO LOVED ME

He-he-HELLO!, and welcome back! It struck me that I've been remiss in letting you know about two new pieces of film writing by me that went up at different sites in the last week. I'd never want all 19 followers of this blog (is it still 19 on the Blogger count list? I haven't checked in ages) to be bereft of good reading, so allow me to rectify that now.

Over at RogerEbert.com, I wrote about The Spy Who Loved Me, the best of the Roger Moore Bond films, which celebrated the 40th anniversary of its U.S. release last week. That we're roughly the same distance from this dizzy, effervescent delight as it was from, say, Hitchcock's Young and Innocent is rather surreal-- the Bond films so often feel of-the-moment to me, regardless of how old they are--but the anniversary allowed me to go logorrheic on one of my favorite fantasy adventures, and why Moore's brand of tongue-in-cheek elegance feels so essential to this moment, cinematic and otherwise. 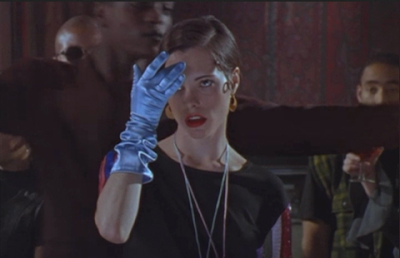 Party Girl (1995) offers a different, but no less crucial, sort of effervescent escapism. I wrote about Parker Posey's star vehicle for Bright Wall/Dark Room's 50th issue, whose theme is "Survival Kits." The film functioned that way for me as I drifted through the post-collegiate, pre-grad school years of the mid-90s, a period I anecdotally explore in tandem with the film, with Posey as my cinematic avatar.

Isabella lucas said…
THIS IS MY TESTIMONY HOW I GOT MY PARTNER BACK WITH A GENUINE LOVE SPELL AFTER HE BROKE UP WITH OUR MARRIAGE.


I felt a deep sadness when he left me to live with another woman,and I did all I could to talk him out..,I told him how much I love him and the kids needs him too..I was so broken until I got help from a friend on a blog who posted how Dr okoso a love magician and spell caster helped Her bring back her spouse after 6years of divorce.. I contacted him on his email OKOSOTEMPLE@GMAIL.COM , then he told me to call him on WhatsApp +2348104720961 and I called him on video call He was truly genuine and trustworthy and He did a love spell on me..barely 48hours, my husband called me to say he's sorry and he came back home~ I 100 percent trust Dr okoso.. If you need help to bring back your ex ,or you want your relationship to be peaceful and to stop a Heartbreak, Breakup and also to stop your partner from cheating on you, contact him.. I'm sharing this because I want a lot of people out here to get help too.. THIS IS NOT A SPAM.MY NAME IS ISABELLA LUCAS AND I LIVE IN TEXAS UNITED STATE..THIS IS A GENUINE TESTIMONY THAT SHAPED MY HOME AND I'M SO CONFIDENT TO RECOMMEND HIM TO THE WHOLE WORLD..Anyone In a toxic relationship should talk to him..Thanks

Angel charls said…
Wonderful post
really nice
i enjoyed this
for any query or support go to Google Contact
December 30, 2020 at 3:48 AM