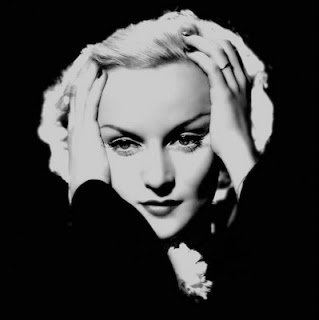 After a weekend Indian summer, fall has returned with a vengeance here in Cineville, leaving your dashing narrator all woozy again (I swear, if I get one more &$%$#* cold, I'm going to go all Angelus on this place), and thus unable to blog about the backlog of movies (Royal Flash, Revolutionary Road), comics (Spider-Man!) and events (Jonathan Demme at Oberlin!) that have been dancing through his head for a couple of weeks now,.

But I would be remiss if I didn't at least take a moment to point you in the direction of the world's greatest film blogger, that sultry chanteuse know as Self-Styled Siren, who has two great posts up that delienate a well-deserved rise in her media profile. The first reveals both the line-up of films she's co-chosen for TCM's upcoming "Shadows of Russia" series (in Siren's words, "focusing on the many views of Russia and communism to be found in American movies") and her real name (which I could not possibly spoil here). The second intertwines two of my sweet spots-- anecdotes and that big, baggy, fascinating beast called Gone With The Wind--and also offers a set of great links.

No one sings like the Siren sings, so let her voice lure you over to her place. On a cold and wet November day, there are worse things to do than get lost in the spell of cinephilia that she casts.
Labels: Anecdotes Gone With The Wind Links Self-Styled Siren

Greg said…
But I would be remiss if I didn't at least take a moment to point you in the direction of the world's greatest film blogger...

Aw, shucks, thanks Brian. Really, you shouldn't have. But you spelled my name wrong. In fact, reeeeally wrong. I mean, damn your spelling's bad. You didn't even start it with a "G". In fact it looks like another name completely. Like it's... Oh... uh... yeah, I think I... uh...