When Jack Lemmon died nine years ago, and there were numerous (and well-deserved) tributes all over the media, I did what I often do in such situations-- I went to the video store to rent those films of his that I hadn't seen. I rented three or four Lemmon movies, but I only remember watching one: Days of Wine and Roses. I popped it in on a warm Sunday morning in Florida, and was close to shaking when I took it out a couple of hours later. After watching that, I did not want to see any Jack Lemmon films for a long time.

That might sound like an insult, but it's really not: Days of Wine and Roses might contain the finest performance of Lemmon's exemplary career, and my aversion to him after seeing it is precisely because of how brilliantly it uses his established persona and considerable charm for deeply, deeply harrowing ends. Lemmon deserves a lot of credit for his courage in this film, but even more, the film's aesthetic brilliance is a testament to its director, Blake Edwards, who died this week at 88, and whose mastery of slick, state-of-the-sixties mise-en-scene makes the movie a masterpiece I never want to see again.

Every time I've seen Roses discussed, words like "harrowing" or "shattering" are generally used to describe it. I am one with Self-Styled Siren, who writes

The first is Days of Wine and Roses, a movie that belongs to that category of film that’s so harrowing it’s hard to analyze....The other films either plunk you down in media boozus, or show alcoholism as something that’s triggered, essentially, by a run of bad luck. Days of Wine and Roses, with a skilled purveyor of slapstick at the helm, has the nerve to start when the drinking is still fun and the drunks are still charming--and not just because they’re the intensely lovable Jack Lemmon and Lee Remick--and then take them to where all smiles stop together. The Siren isn’t sure when or if she’ll watch it again, ever, because then she’d have to watch Lemmon smashing the greenhouse, or trying to persuade a breastfeeding Remick to have a drink with him. Frankly, just the opening bars of the credits kill her.

I can actually go Siren one better-- I was house-sitting one summer when I found a Sinatra CD in the house-owner's collection. I took it off the shelf, and just seeing the title of Henry Mancini's title song listed was enough to literally send shivers down my spine. I put the CD back on the shelf, and vowed not to look in its direction for the duration of my stay.

Edwards would later admit in an interview that his own struggles with alcohol had contributed to Roses' look and tone, and it shows: I know of no American motion picture that captures all the tiny, lovable, passive-aggressive and very sad details of an addicted life so well. The need to impress and charm; the way booze can be a seductive tool, or a literal prop (as Aaron Sorkin put it on The West Wing, drinking is not just about the drink, but the way a glass can feel in your hand, the way light bouncing off it becomes a fetish); the inability to understand how you come across when you're under the influence (and how disturbing those moments of self-awareness can be when they poke through the fog); the sudden swerves in emotion and tone (watch that scene early on when Lemmon comes home to Remick's apartment with a grocery bag full of bottles, and note how imperceptibly Edwards shifts us from comedy to Expressionist horror and back again, as if it's the most normal thing in the world). Edwards nails all of these thematic and emotional bits very well, but they work because they rest within in a visual space that's only one of two steps away from the bright cheeriness of a then-typical rom-com. That slow descent into terror that Siren notes only works because of how brilliantly it derives from upon our other cinematic fetishes and addictions: happy couples, office comedies, the glittering chrome-and-glass apartments of the modern family. Leaving Las Vegas and The Lost Weekend both contain brilliant central performances (and I like both of those movies very much), but whether because of a kind of romanticizing of the doomed hero or the Production Code of the period, they both feel pulled back a bit; Roses goes all the way in its ruthless denouement, finding a way to take the mannerisms that both star and director were known for and using that intense stylization to make something hauntingly real.

But then, even in his comedies, there was always an air of doom and desperation in a Blake Edwards movie, the laughs as much a release of anxiety as pleasure. Operation Mad Ball, the comedy he co-wrote for director Richard Quine, is a forerunner to films like M.A.S.H. in its blackly comic depiction of military bureaucracy run amok. While it is nominally about army private Jack Lemmon trying to woo superior officer Kathryn Grant by setting up an illegal, off-base party for nurses and enlisted men, any boy-meets-girl sentiment is quickly subsumed by the detailed (and very funny) planning of the party itself, and the revenge plots against officious enemies that spin in and out of it. It's a preference for elaborate design over emotional content that perhaps makes the film a self-reflection on Edwards' love of the meticulously staged slapstick joke. Operation Petticoat, directed by Edwards the following year, frames its primary narrative with patriotic shots of loving families meeting their Navy husbands dockside, but the heart of the film is the cynical fixer played by Tony Curtis (in his best comedic performance) who transforms World War II into one very lucrative cash opportunity (the role was a more polished version of a character type Edwards and Curtis had also explored in the previous year's A Perfect Furlough). Cary Grant is the perfect foil for Curtis' machinations, because while his position requires him to be 'outraged,' Grant's wry, dry style suggests he's really a co-conspirator at heart.

Edwards would create the television series Peter Gunn, and then return to the big screen for his best tale of dreamers, schemers and the way that romantic dreams rub against harsh realities. Breakfast at Tiffany's transforms major characters from Truman Capote's novel, has a very racist character played by Mickey Rooney, and as Siren once pointed out, isn't that nice to Patricia Neal's character. Despite that (and that's a lot to despite), it is a superb and very sad romantic comedy, and in some ways its loose ends and problematic pieces enhance its power: this is less the late-fifties, love-conquers-all story suggested by the swelling chorus on "Moon River" than that song's sad, minor-key opening, full of loneliness and a longing that can't really be fulfilled (but that we can fool ourselves into believing will be by that ending in the alley). Do I sound cynical? I don't mean to-- I love this movie with all my heart, and I fall under the sway of that rain-swept scene as much as anyone. With that trench-coat Audrey Hepburn is wearing, and the way that George Peppard grabs her in the alley, who wouldn't? The movie would inspire a pop song, a funny Seinfeld parody, and many homages on Gossip Girl (a program whose aesthetic owes a lot to Edwards' blend of camp, sentiment and cynicism), but none of them would ever capture its sense of wistful longing. Tiffany's looks as good as any romance from 1961, and Edwards uses his expertise in crafting that look to simultaneously extend those pleasures and question their limits.

That makes it the dry run for Roses, a film that I feel both a fierce desire to write about and that I find it almost impossible to write about, since its power for me is so overwhelming. I vaguely knew what it was about when I started watching it all those years ago, but put all that at the back of my head as I watched Jack Lemmon's Joe Clay unfold on screen like a cousin to Lemmon's characters in The Apartment or Mr. Roberts. Roses was released in late 1962, around the same time as that other great film about a functional alcoholic, Dr. No; Joe Clay probably thinks he's as smooth as James Bond, but even as he charms Lee Remick (and make no mistake, he is charming early on), something seems slightly off-- the desperation of his wooing, his anger when little bits of his corporate party-planning don't work out, that yelling in the apartment corridor I mentioned earlier. Even for a high-strung Lemmon character, Joe has a short fuse. Remick's Kirsten, too, is very sweet and cute, but has a naif-like quality that doesn't seem quite real-- she seems to live inside the encyclopedias she is reading to advance her education, and is less a person than a storybook character. The first really chilling moment comes when Joe convinces Kirsten (a non-drinker) to try that Brandy Alexander at the restaurant, and it's chilling precisely because it's played so casually-- how different is this from the Lemmon or Curtis schemers we've seen in other Edwards films? 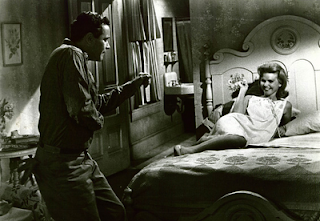 As we move from the office buildings to the high-rise apartment and then into the grip of alcoholism, the film becomes a visual compendium of downward mobility: the homes become shoddier, the clothes and faces ragged. Edwards has embodied the fears around addiction, and his increasing use of oblique angles and tight close-ups makes the slickness of his style all the more devastating: we know there's sensual escape out there, but we're in the grip of the frame (and that desire for escape is also part of the disease).

Following Days of Wine and Roses, Edwards pulled back, as if working to convince us that the abyss he just took us towards could be washed away in a blur of color, glamour, and brilliantly brittle verbal wit. There would be great movies (A Shot in the Dark, Victor/Victoria), mediocrities (his two collaborations with Bruce Willis, Sunset and Blind Date), and movies that are best forgotten (like City Heat or the non-Sellers Panther films); they'd all play in one way or another on that laughing-to-keep-from-screaming anxiety that was his trademark, but none of them would ever return to the power of Tiffany's or Roses. Still, an ability to blend style and slapstick wit is nothing to dismiss: right towards the end, when he staged his honorary Oscar speech as a funny stunt, he could still dazzle, and remind us of how closely the need to entertain was intertwined with the risk of an emotional crash. R.I.P., Blake Edwards.
Labels: Blake Edwards Jack Lemmon melodrama movies Obits Romantic Comedy