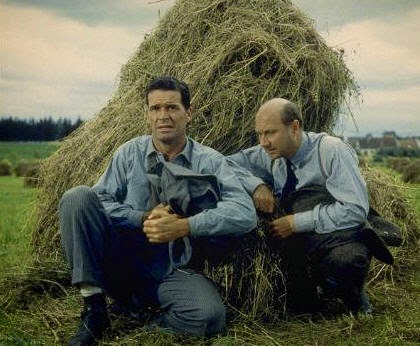 Between The Rockford Files, Maverick, and The Americanization of Emily (1964), James Garner was an icon in my house growing up, but he was an approachable icon: omnipresent, but warm and funny rather than intimidating, offering a sly smile rather than a demand to be worshipped (Robert Redford had a similar ubiquity in our home, but his movie-star glamour made him distant in a larger-than-life way). Over at Time's blog, James Poniewozik has a nice remembrance that notes Garner's scoundrel qualities:

Debuting in 1957, Maverick was a character ahead of his time in spirit, a forerunner of the little-guy heroes, the roguish, anti-authoritarians who would rule movies and TV in the 1970s. You can see a little bit of a proto-Bill Murray in the dry, sly Maverick, and if Star Wars had been made 20 years earlier, Garner would have been your Han Solo hands down.

I think that's absolutely right, and yet what I've been thinking about since I heard about Garner's death earlier today is a variation on what Glenn Kenny describes as the actor's "way of relaxing into whatever character he was playing that only made you want to be by the character's side...part of what makes The Great Escape such a great sit is the fact that you'd follow Garner's Hendley anywhere, any time." Even more than Garner's quick wit, his physical prowess in fight scenes or race cars, or his ability to deliver devastating truths with clear-eyed calm, it is this quality of ease and support that makes him a memorable star. It's not just that we'd follow him anywhere, but that we sense he'd be by our side, too, no matter what.

Take The Great Escape (1963), a brilliant wartime adventure that is secretly a story about the love of two brothers-in-arms. Its most famous imagery involves Steve McQueen, bouncing a ball against a P.O.W. cell or jumping a motorcycle to glory. But the heart of the film is the touching relationship between Garner's Hendly-- a "fixer" with the charm and ability to scrounge anything needed to escape the German camp--and Donald Pleasence's Blythe, "the Forger" whose skill at transforming Hendly's materials into fake passports and other materials is damaged by a progressive myopia that almost makes him unable to escape the camp. It is only Hendly's insistence that he'll be Blythe's eyes along the way that gets the latter out of the camp, and as the movie unfolds, and their journey gets more difficult, Hendly's ceaseless support of Blythe feels like a metaphor for an old married couple, facing physical difficulty but not letting go of each other.


It's an unlikely couple-- Pleasence is gentle and introverted, movingly capturing Blythe's embarrassment at his situation, while Garner has an easy physical charisma and outgoing charm. But Garner bends that presence to fit Pleasence's approach, subtly playing with posture, vocal timbre, the way he holds and guides Pleasence through the escape's various pitfalls, in order to make us understand Blythe's predicament (and to cast a spotlight on how good Pleasence is in his role).  Garner's no-nonsense acting style is perfectly in sync with Hendly's quiet determination to not leave his friend behind, and to not let anything get in their way; he is a very masculine movie star tough guy unafraid to show unaffected love and concern on-screen for another man (perhaps it was this comfort in his own masculinity that caused Blake Edwards to cast him in Victor/Victoria (1982), where he negotiates that comedy's complex sexuality and reworking of screwball tropes without a hint of self-consciousness). 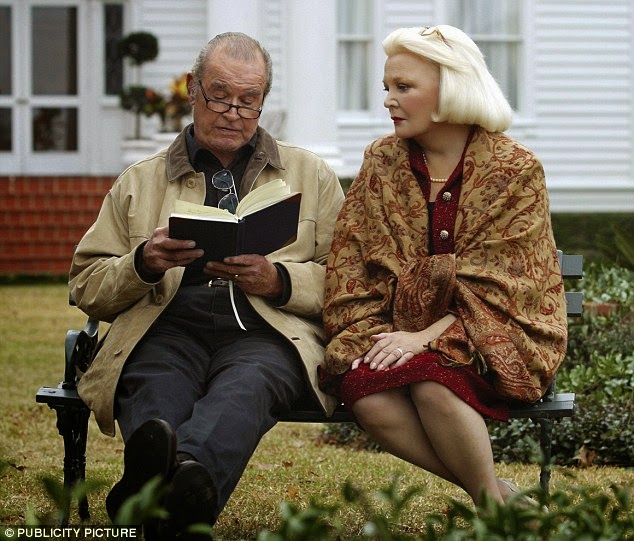 Forty years after The Great Escape, Garner starred in an adaptation of Nicholas Sparks' The Notebook (2004), opposite Gena Rowlands. The Notebook is a terrible movie, a treacly bit of stalker porn that doesn't understand how problematic the "great romance" at its center really is (Ryan Gosling and Rachel McAdams struggle mightily with their portion of the film, but even their considerable gifts can't transform the essential odiousness of the narrative).  But Garner is spectacular opposite Rowlands, and again he is the helpmate, taking care of both Rowlands' character and his portion of the film, and almost transforming the picture's cliches into something meaningful. There's a tremendous gentleness to Garner here, his posture bent but his voice calm and loving, full of reassurance as Rowlands' dementia grows. Had the movie stayed in the present, with just these two actors, it might have been something special, but as it is, I am still grateful for their scenes, and for two performers unafraid to be vulnerable and touchingly uncertain in the face of The Notebook's ceaseless, erroneous certainties about love.

(Garner has a lovely anecdote about filming The Notebook in his memoir, The Garner Files, where he relates laughing at Nick Cassavettes' direction to Rowlands: "Okay, Mom, action!" With winning self-deprecation, Garner admits to some sheepishness about laughing at his director, and ruining the shot: after all, he notes, what else was Cassavettes supposed to call his mother?).

In her introduction to The Garner Files, Garner's frequent co-star Julie Andrews raves about Garner's attentiveness to his fellow performers, and his lack of ego on-screen:

He owns his place on the screen, he *listens*, and he gives back. My husband, Blake, who directed Jim in two films-- Victor/Victoria and Sunset--used to say that not only is he a good actor, he's a great reactor. As far as I'm concerned, few can match him in that regard. Watch his panic and fear in Emily as he heads for Omaha Beach. Watch him in Victor/Victoria when he discovers the lady he's attracted to is actually a man (Except that she's not!) Catch the pain he feels in One Special Night when he realizes there's nothing he can do for his dying wife.

It was a generosity Garner brought to movies good (Murphy's Romance (1984), for which he received a well-deserved Oscar nomination), bad, and mediocre (Space Cowboys (2000), a film with a game cast that never achieves lift-off), and most of all, it was a quality he always shared with his audience. In one of The Rockford Files' most famous 'fight' scenes, Garner's title character thwarts a thug twice his size by covering a bathroom floor with soapy water, causing the man to wipe out before he can even land a punch. "The trouble with karate," Rockford notes in Garner's wry Oklahoma twang, "is that it's based on the ridiculous assumption that the other guy'll fight fair." 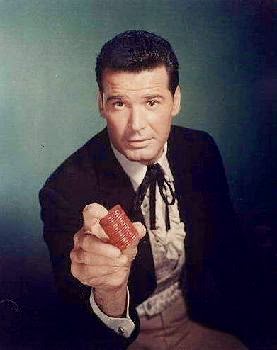 The glory of Garner as a performer is that, for all his skill at portraying cads, cowards, and Smartest Guys in the Room, he always fought fair, never cheated his audience or his gifts. He'd follow us anywhere.