Getting The Band Back Together: The Wicked + The Divine 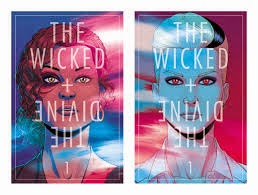 It was a few nights ago, and while talking about pop music with my wife, I was trying to explain the impact Prince had on my teenaged self. Finally, after talking about the playfulness of his persona, the powerful contradictions in his lyrics, the energy of the music, I settled on the most expressive reason: "Prince taught me how to walk."

I wasn't sure what that meant, exactly, except that I felt it very deeply: vivid visual memories of high school hallways, being sixteen, understanding that there was such a confidence to Prince's work that you literally felt it, that it transformed your body. Hundreds of songs exist about dance floors and nightclubs, but the best pop music gets under your skin everywhere, transforms the everyday into a song. It's alluring and liberating and addictive, and Kieron Gillen and Jamie McKelvie get it down to their bones. When, in one of his patented end-of-the-issue essays at the back of issue two of The Wicked + The Divine, Gillen alludes to his own experience with the physicality of pop-- talking of how Hole's "Beautiful Son" made him "...walk better. I wasn't uncomfortable, but now I'm beyond comfortable. It's the first time I've felt like a shark in any waters. Whatever this is, I'm at home here, and I'm powerful here."--I smiled and nodded in recognition.

There are pop artists that speak to you so deeply that it's like you've known them your whole life, that they were buried in your subconscious, and each new work is less an act of consumerism than one of self-recognition, another part of their body of work intersecting with yours, and everything moving together. Gillen and McKelvie are like that for me-- Phonogram, Young Avengers, and now their new title, The Wicked + The Divine--are rich, allusive, deeply personal books that somehow feel like they were made just for me. At some level, Gillen and McKelvie must recognize this effect, since it's also the central theme of their work-- how pop culture, superpowers, and other kinds of magic are acts of alchemy, requiring the reader or listener to finish the work that's offered: they gain power when we bind them to us. And that's when the trouble starts: there are trade-offs to the bargain, almost mythological moral problems that arise from such transactions-- but we still don't want to let go. It could all feel heavy-handed in, say, Mark Millar's hands, but Gillen and McKelvie are fleet, witty craftsman, and so in love with their characters (no matter the levels of irony that they bring to them) that their messages feel less like lectures than the melancholy harmonies of a Brian Wilson song: there's wistfulness and loss, but it all sounds great. 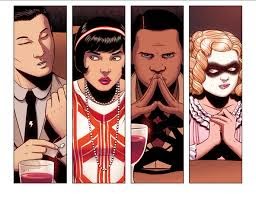 I wrote about Phonogram here, and found out three years later that Gillen had somehow stumbled across my piece, and liked it. I mention this because it made me feel a bit like Laura, the central protagonist of Divine: a seventeen-year-old South London girl obsessed with the pop star gods that dominate the city's music scene. And when I say "gods," I'm not speaking metaphorically-- the magic radiating from their stages is literally mythological, because the twelve stars are actually reincarnations of gods that appear every ninety years, in an event known as "The Reccurence." They only live for two years in these god-like pop forms, but while they're there, it seems wonderful: as "Luci," the Bowiesque Lucifer who seduces Laura into their pack drily suggests, it's "a sad, sad story of lives wasted being truly divine," and we're meant to hear the double meaning on her last word. The book's blend of everyday London banality (tube stops, bored television watching), pop sheen and mythological violence effortlessly achieves the surreality and shock-of-juxtaposition that Brian Azzarello strived for on his recent Wonder Woman run, but only intermittently achieved. 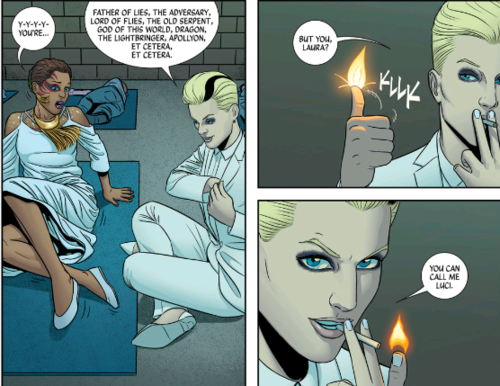 Luci and Laura are joined by a supporting cast that feels at once immediate and elusive (and allusive, of course-- McKelvie and Gillen are always allusive). Two issues in, we know little about Ananke (God of Fate, Chooser of the Reincarnated), Amaterasu (Florence and The Machine by way of Dazzler, whose on-stage glow has the power to make people cum and then pass out), Baal (gold-chained pop star with an undefined edge: Laura notes that her love of Baal "probably says bad things about me"), and Cassandra, the cynical grad-student-turned-internet-reporter trying to expose the gods as frauds, who acts as the opportunistic, ironic angel on Laura's other shoulder, trying to drown out Luci's seductive promises with her own selfish syllogisms.  Coming to Divine at the start, rather than reading it in completed trade form as I did with Phonogram, is both thrilling and frustrating: it's harder to get a full sense of how all the pieces fit, but that doesn't matter as much now as the high the pages give off, and the sensation of Gillen working at full power after an enjoyable-but-slow run on Iron Man. To make the Britpop analogy explicit, this is not the Blur of Leisure, making fun-but- awkwardly-compromised pop within someone else's commercial framework, but the Blur of Modern Life is Rubbish-- brash, cocksure, and full of such "fuck you" swagger you'd pretty much follow them anywhere.

The overload of character, narrative, and energy coursing through the pages is well-captured by the color art by McKelvie and Matthew Wilson-- its Technicolor rush feels like a Katy Perry video mashed with J-Pop art, and stands in striking contrast to the black-and-white minimalism of Phonogram (even as the writing suggests thematic linkages with the earlier work). In the backpages of issue one, Gillen has a long discourse on how The Wicked + The Divine both is and isn't  "the third volume of Phonogram" (which is on its way sometime in the next year), as well as both books' autobiographical qualities: Phonogram places magic in "our world. It's outside your window. The bands are real, the people are real...The point is that the fantasy is not a fantasy. the fantasy is a lifestyle. It's how I lived for the best part of a worst decade." Divine, on the other hand, "is a fantasy. This isn't our world...It's a world we've created to lose yourself in, to become addicted to, to find yourself in." 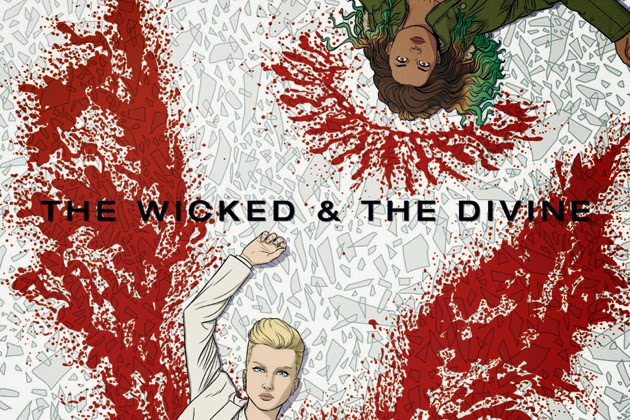 That flip makes The Wicked + The Divine less immediately accessible-- that sense of explicit identification with a character's tastes (or rejection of them, which amounts to the same thing) created a quick bond--but potentially longer-lasting: the world of gods, music, media, fandom and criminality the books is establishing could spin out forever, like the Spotify lists Gillen is busy establishing for the book's readers. That we happily fall into this world knowing the irony of our fall is part of the fun, of course, and part of the magic. "I want everything you have," Laura blurts out to Luci in a moment of unplanned honesty. It's a statement of greed, desire, fandom, and longing, but also a declaration of identity: symbiosis and appropriation as engines of creation. Gillen and McKelvie are laying down the groove for us once again.