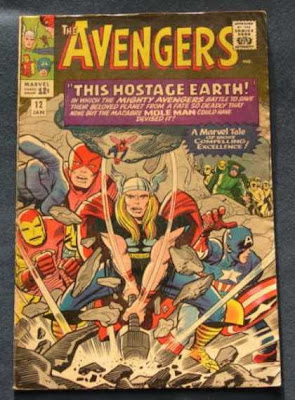 I bought Avengers #12 (published in 1964, with a cover date of January 1965) in 1985, when I was twelve, and I think it cost me two or three dollars in fine condition. I don't know what it would be worth today, but its value to me at the time was far more than monetary-- it was one of the first "Silver Age" comics I bought that was an original (not a reprint, like the Spider-Man stories then being republished in Marvel Tales). The art by Don Heck and Dick Ayers time-traveled me to another place (a feeling enhanced by the yellowing paper it was printed on), and Stan Lee's script skillfully wove together the adventurous (a confrontation with the Mole Man and his underground army, facing off against my favorite Avengers line-up), the character-driven melodramatic (Thor's egocentric refusal to believe there's a threat that's based on information from ants, Giant-Man's ups-and-downs with his girlfriend the Wasp, Iron Man and Captain America's valiant attempts to hold the team together) and the tongue-in-cheek (Iron Man gets to the Avengers meeting using-- I kid you not-- the roller skates in his armor boots).

But more than the story or the art, it was the pages around the story that truly excited me-- the old-style letters column, the ads for "23 Lessons in Hypnotic Feats" (the copy read, "Give Me Just One Evening and I'll Teach You To Hypnotize Easily!"), and especially the Marvel in-house ads, which displayed covers for other titles being published that month (Strange Tales# 129, Tales of Suspense #62--with Cap and Iron Man!--Fantastic Four #35, whose cover I posted just the other day). I spent more time staring at those covers than I did reading the story, I think, and even now glancing at them brings back both the childhood memories of the 80s and the oddly sensual nostalgia they evoked for me back then. It was a nostalgia for a time I did not live through, but which seemed so interesting, and was so well captured by those Marvel time capsules. Andre Bazin wrote of cinema as being a "death mask," preserving like an Egyptian tomb the styles and more of an earlier day. Because they took place in the "real world" of New York, and because they were so willing to reference the pop culture of the day, those Marvel covers function that way for me-- if they aren't an accurate representation of 1964, they at least call up 1964 as it should have been, as its artists chose to capture it.

Which brings us back to the cover of Avengers #12. The book's interior art was done by Heck, but the cover was penciled by Jack Kirby, who did many of Marvel's covers in the early 60s. The first thing I always notice is Giant-Man's oversized pointer finger, nicely balanced by Cap's oversized hand on the right-- they call attention to the cartoonishness of the image, and its stylized vision of reality, even as the almost 3-D effect of their resizing draws the viewer in viscerally. Is Giant-Man pointing to the world outside the space of the comic, that world that the stories work so hard to weave into their melodrama, even if both the fantastical nature of the stories and the physical limitations of the page itself mean that it will always be a simulacra of that world, not its "reality"? (Giant-Man's finger by necessity can never quite break its spatial plane.) The cover captures an action shot from the scene, but also feels like a snapshot of the characters posing for the reader-- they look out "at the camera," as it were, and even the Mole Man and his minions in the background look like they're starting at the viewer. We're intruders on this scene, and even as the cast catches sight of us, Thor's mighty hammer dynamically smashes down on the rock, breaking the pose-- smashing the lingering nostalgia--and returning us to the action inside.
Labels: childhood Comic Book Covers Comics Marvel memory The Avengers