By the time Gambit was introduced in Uncanny X-Men #266, I had long since stopped reading comics, and when I started again at the end of the '90s, the overwrought mutant titles generally weren't on my pull list (with a couple of exceptions).

So I had no strong reaction to the news that the character would be making an appearance in the upcoming Wolverine movie. My lovely companion, however, who is Cajun, understandably finds the ability to throw cards an ultra-lame superpower, is further annoyed by the X-writers' tendency to write Gambit's accent in the most stereotypical of ways, and generally finds the character fairly idiotic. But we are big fans of Friday Night Lights, and especially dig Riggins, the soulful bad boy so winningly embodied by Taylor Kitsch. So when the news came that Kitsch would be playing the Ragin' Mutant Cajun in the new film, we took a wait-and-see attitude.

Via the excellent Comic By Comic, I found out that new pictures of Kistch-as-Gambit had been released. 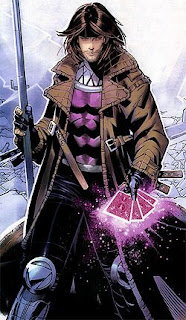 And here's Kitsch in the film: 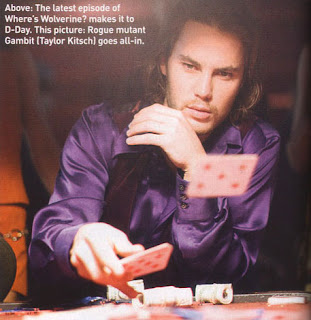 Hmm...Not bad. Perhaps more Rounders than X-Men, but that's not a bad thing (and it's certainly a big improvement on the Mullet Boy in the illustration). If Kitsch can find a way to channel the bruised aggression he uses so effectively on FNL into the new role, and he has good chemistry with co-stars Hugh Jackman and Liev Schreiber (great cast, by the way), then X-Men Origins: Wolverine might be interesting, indeed.

Anonymous said…
Fan as I am of Our Man Riggins, I do think it's fitting that Gambit's being played by a man named Kitsch.
December 7, 2008 at 7:18 AM