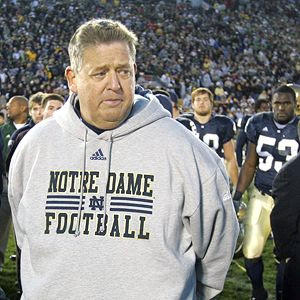 Well, looks like USC (and Navy, and Boston College, and Syracuse, and...) will have Charlie Weis to to kick around next year.

Here are the money quotes:

The decision gives Weis another shot at trying to return Notre Dame to prominence after the team lost 15 games the past two seasons, the most by Notre Dame in a two-year span.

The former New England Patriots offensive coordinator has a record of 28-21 in four years, a .571 winning percentage. That's slightly worse than his two predecessors, Tyrone Willingham and Bob Davie.

The wins against quality teams have been scarce. Notre Dame beat No. 3 Michigan in Weis' second game as coach, but the Wolverines finished 7-5 that season. His only victory against a team that finished a season ranked in the Top 25 was a 41-17 win over a Penn State squad that finished 2006 ranked No. 24.

His finest moment as Irish coach came midway through his first season, when the Irish were 12-point underdogs to top-ranked USC. He worked Notre Dame fans into a frenzy that week and held the weekly pep rally outside at Notre Dame Stadium and 45,000 people attended. The Trojans narrowly won when Reggie Bush pushed Matt Leinart into the end zone with 3 seconds left.

His "finest moment" is a close LOSS? That tells you everything you need to know, doesn't it? "We almost won! We almost won!" Heck of a job, Charlie!

So, Ty Willingham gets three years with a better winning percentage, while a coach recently described in one article as having "built zero relationships at the school...It has been all about him and his ego" gets five? The excellent football writer Stewart Mandel suggests it's about ND lowering their expectations and giving a coach more time to run a program. Fine, but I do wish those chances weren't so selectively applied. In Notre Dame's weird matrix of money, power, race, recruiting and alumni relations, screwing over the coach who was (in the words of the AD when he fired Willingham) a credit to the school "every day but Saturday," while keeping the guy who doesn't seem like a credit any day of the week, doesn't do wonders for the program's image.
Labels: football Media Politics Sports