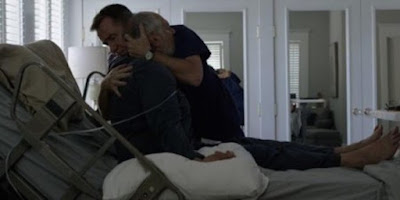 Chronic opens with a long take, framed with the interior of a car, as we peer through a windshield at the front of a house, the driveway and lawn seen in pieces, an unidentified person seen locking the door. The shot lingers for a minute, really allowing the eye to wander, to observe the person close the front door, fumble with keys and then walk to the car. There's no cut to a close-up, no music on the soundtrack, no indication of where we are or why this moment is important. Nothing is explained or justified. It's an act of seeing, a glimpse out of time. It is banal, and it is riveting.

Introduced at the Cleveland Film Festival's March 31 afternoon screening by hospice workers from Cleveland and Ohio City, Chronic details the life of David (Tim Roth), a professional care-giver working with different patients in Southern California. I saw this film more than a week ago, loved it, and yet have delayed writing about it, for reasons I can't quite ascertain. In part I think it's due to the personal, often-difficult nature of the material, but I think a bigger reason is its tone and approach to David's story. This is a film full of long takes like the one I described above, long extended shots of space whose duration and stillness generates a paradoxical response (at least in me): the often-immobile camera's unshakeable, intense focus on what the frame has cut out of its world at a given moment lets the mind wander and observe, drift and make connections to what is unsaid, even as we observe the rich and sad detail of David's work routines. Director Michel Franco allows details to pile up (the way that David shifts a resting body in bed, how he bathes a patient, the exquisite sensation of tiny things like the smell and texture of parsley in the kitchen), and the immersion in the everyday feels vital. 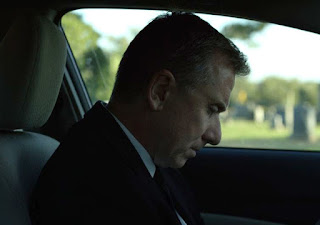 The first interaction with a patient we see is David's care of Sarah (Rachel Pickup), dying of cancer, framed on couches, in bathtubs, against kitchen walls, as if she was a figure out of a Jacques Louis David painting (especially in the film's earlier scenes, there's a way in which the still frame makes the photography feel almost painterly in its figuration). Sarah and David are often framed within the frame by doorways, or the jutting edges of a hallway, creating a split-screen effect that suggests David's distance from her, even when they are in the same shot. Throughout the film, recurring door-frames and windows will provide ironic commentaries on transparency, connection and access--emotional, familial, professional, legal. The interplay between Tim Roth and Rachel Pickup in these early scenes feels like a documentary while maintaining a stylized theatricality; there's a complex tone of control and looseness (as when Sarah's family are saying their final goodbyes to Sarah on her living room couch), which slowly seeps from being simply a pleasing stylistic tool, to becoming the main thread of the narrative. While an excellent care-giver, we slowly learn that David's life outside of his job is far messier.

The first hint is at a bar, after Sarah's funeral (again, an earlier moment marked by a shot through a windshield).  Chatting with a young couple, David tells them Sarah was his wife, and she's just passed away. Later, taking care of second patient John (a sad, funny Michael Christofer), a retired architect who's suffered a stroke, David becomes obsessed with architecture, haunts bookstores and visits the houses John has designed, taking pictures and almost absorbing his spirit (as in the earlier bar scene, he also fictionalizes his relationship to the patient, describing himself as David's brother). David's intense desire to connect with John generates moments of real comedy, but also leads to unpleasant complications with John's family, while David's own family situation is equally problematic: his relationship with his daughter and ex-wife is strained (a long, brilliant tracking shot follows David's footsteps as he surreptitiously follows his kid around her college campus), and his past as a care-giver is clouded by controversy. 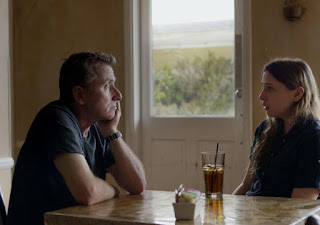 And yet, even as the narrative slowly unravels David's contradictions and fuck-ups, the quiet, controlled tone remains, its small moments of visual observation rubbing up against the actual melodrama of David's life in a way that feels increasingly unsettled. It's an out-of-time drift enhanced by the California setting--seasons and temporal shifts become uncertain, marked only by holidays like Thanksgiving. Everything else is just routine.

This works so well not only because of Franco's pitch-perfect control, but because Tim Roth's sad, open face generally maintains a blankness like Garbo's: he signifies almost nothing except his professionalism, and that allows us to complete the thought, or to luxuriate in the ambiguity of what he might be thinking. It's one of Roth's best performances, and he crafts a disturbing character study of addiction and "chronic" behavior that's reminiscent of Ben Mendelsohn's in last year's Mississippi Grind: you know he's doomed, he knows he's doomed, and yet the empathy never fades amidst disturbing revelations and narrative shifts.

The film is admirably, resolutely unwilling to settle on how it feels about David, to either sanctify or defrock his work, its performative qualities, and the way it becomes increasingly inseparable from the messiness of the "life" David has outside of it. As the film progresses, each of David's new patients plays a different role in his flat-lining: tragedy, comedy, reality/resignation. Perhaps that's why I wasn't as upset as some of the people around me in the CIFF screening room when the movie ended: what might feel shocking becomes, at last, an almost cathartic release from the responsibilities of watching, of observation. And like David, we're drained. 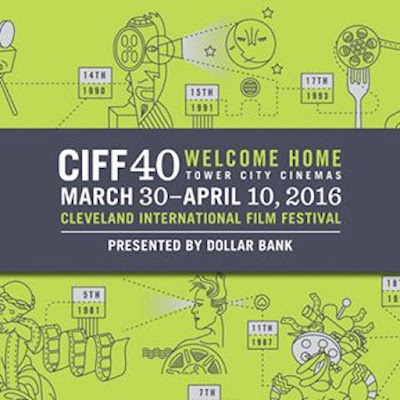