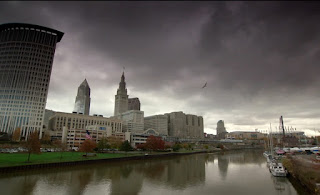 1.  A woman waits nervously in the pool-house of a desert complex, the space stretching around and above her like an endlessly reflective Escher piece, as she talks to a strange companion on the other side of the room, and one's eye darts around to make sure nothing is missed; a train blows across the river like it's 1895, and suddenly erupts into a hail of bats; ghosts make sudden appearances in a 360-degree space; the ineffability of love and the sensation of blindness are made three-dimensional. Your blue hand reaches out for a lens that slips your grasp, the 7 deadly sins are given a humorous multi-media spin, you walk through Walden, and a Japanese internment camp life is made vivid. 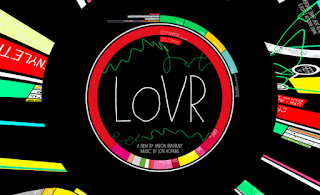 2. There are dozens of CIFF films screened each day in the Tower City Cinemas multiplex; go upstairs to the multi-level mall's second floor, and you'll find a different kind of cinematic future. "Perspectives," billed by the Cleveland International Film Festival as "An interactive/immersive exhibition/expo/experience" offers 10 virtual reality films (viewed via headset goggles and earphones, ideally in one of the room's plush egg chairs), six interactive media sites (on desktop computers), a demonstration of a new interactive virtual reality headset from GW-VR.com, and an interactive big-screen program that lets visitors toggle around the history of the Fest. It's free with admission (visitors receive three tokens for different experiences when they enter the room), and just opened yesterday. It's running through the end of the Fest on Sunday, and I'd highly recommend making it a part of your visit: I've loved a lot of films at CIFF this year, but the "Perspectives" experience might be the most fun I've had yet. 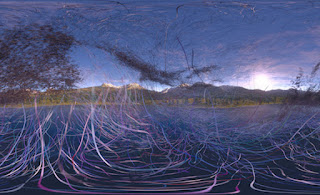 3. I sampled two of the VR films and one of the interactive multi-media sites with my three tokens (a complete listing of available experiences can be found at the "Perspectives" link above; participants can make multiple trips to the room to sample everything, if they like). "Evolution of Verse," a four-minute VR film by Chris Milk and Vrse.works, transforms the imagery one might associate with a desktop screen-saver (water, sky, mountains) into something kinetic and eerie; the immersive, 360-degree space never stops moving, and as one's eye goes back and forth, a new gathering of objects (light streams, animals, an intensely creepy, Kubrickian baby) suddenly appears in one's peripheral vision. It transforms a bucolic space into something both suspenseful and cathartic. 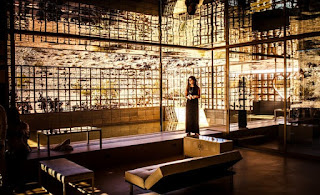 This play with space and suspense is even more effective in "The Visitor," a seven-minute VR movie from James Kaelan, Eve Cohen, and Blessing Yen (in collaboration with BRIGHT IDEAS and Seed&Spark), whose vertiginous play with both visuals and sound makes the style of the film its substance: a woman waits in the room for the force that she fears, but the real panic is the viewer's, as he or she constantly scans across the depth of the room to keep up with the conversation, and make sure nothing is missed. "The Visitor" takes the literal, "this-movie-is-happening-on-your-head" nature of VR technology to get at the way any good horror piece is about the symbiotic relationship between what's happening on screen, and what's happening in the viewer's mind. 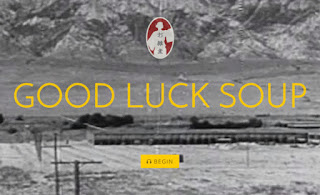 "Good Luck Soup Interactive" is a companion piece to the film of the same name playing in the Fest. I have not had a chance to see the feature yet, but the interactive experience is compelling, drawing on a variety of audio recordings, still photos, newspaper stories, and film/video footage to archive the experiences of Japanese internment survivors and their families over the last 75 years. In addition to the 7 primary stories of the program, there are functions for uploading your own stories, and for sharing the program via Twitter and Facebook, in order to extend the web of remembrance.

4. Alongside the various digital experiences is what the volunteers wittily noted was a more "analog" one: the sticky board on one wall of the room that they called "Storyboard," which let Festival-goers write down their favorite CIFF experiences. Its a nice way extending the communal spaces of the Fest (and perhaps allowing you to thank the tireless volunteers, who were extremely helpful, and even smiled in the face of two particularly passive-aggressive Boomer attendees who yelled, "This isn't a perfect experience!!" to a twenty-something man behind the VR counter. It's true, dears-- perfection will escape us as long as you two are here). But it also works as a reminder that the entire Festival is an "interactive" experience, a deft blend of the human and the cinematic into a "virtual reality" of choice, chance, movement, and revelation. 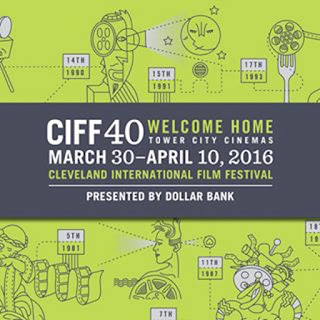