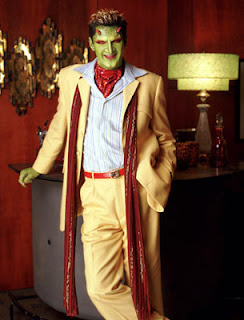 Via Scott Tipton, I learned that Andy Hallett, who played the karaoke demon Lorne on four seasons of Angel, died Sunday night of heart failure. He was 33.

It's a measure of Angel's quirky brilliance that it included a character like Lorne (or Krevlornswath of the Deathwok Clan, to use his full name), whose campy humor and lounge lizard charm acted as a wonderful tonal counterpoint to the show's noirish melodrama. As a demon who could read people's auras (and futures) when they sang, Lorne was a fun twist on the detective genre's informant character, and Hallett was great with Lorne's one-liners (some of the program's best moments played his enthusiastic showmanship off of David Boreanez's deadpan seriousness, especially when the two teamed up in Season Two's "Happy Anniversary" to solve a crime on a college campus). As the show progressed, we learned more about Lorne's past, and watched as his character was slowly sucked into Angel's world, and made more cynical because of it. While always a source of comic relief, Lorne also acted as the show's quiet conscience, and Hallett was excellent at suggesting the darkness and melancholy that lay beneath his character's cheery exterior. It seems appropriate that it's Lorne who gets to voice the program's mission statement, as the gang comes back from his home world of Pylea, and he bucks up the title character:

UPDATE (4/1): I don't know if this works for people without Facebook accounts, but former Angel writer/producer Tim Minear has posted a wonderful 5-minute video of some of Hallett's best moments on the show.
Labels: Andy Hallett Angel Obits TV

Brian Doan said…
Greg,
Lorne was a wonderful character, and I was surprised to read that it was Hallett's first acting job-- he's so good in the part that I assumed he'd had past experience as a character actor. And yes-- it's horrible to suffer that kind of illness at any age, but 33 is just far too young.
March 31, 2009 at 6:23 PM

Bob Westal said…
I just saw this on Whedonesque and it really is a shame. I knew he'd had some fairly serious health problems, but this was still a shock. Way, way, too young to go and his acting talent was greatly out of proportion to his years.
April 1, 2009 at 12:16 AM