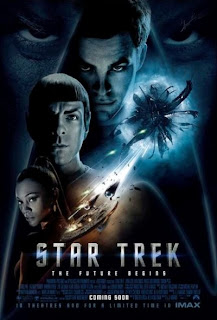 I know I've said this twice already, but does any upcoming summer movie look more fun than Star Trek? When he was here a few weeks ago, OC grad (and current Paramount trailer editor) Stefan Grube promised it would be the "best summer movie ever," and while he obviously has at least a bit of a professional interest in saying so, the film's brilliant trailers have certainly geeked me out, and activated all my dormant Trekkie tendencies. And Grube was a such a good guy about everything else that I'm inclined to think he wasn't pulling my leg, even if that inclination is fueled by hope and cinephiliac desire.

(A word of thanks here to Stefan Grube for speaking with such verve, intelligence and great humor at his lecture/discussion on March 16. I think our cinema studies program-- of which I am proudly a part-- does a good job of giving students all kinds of historical, theoretical and aesthetic context for understanding cinema, but Grube's witty anecdotes about life in the marketing trenches fill an important gap on day-to-day industry practice that I think it was really valuable for us to hear. He brought great clips, did fascinating trailer-to-trailer comparisons to show the evolution of a campaign, and was straightforward about the occasional strangeness of his job while still projecting an enthusiasm and grace about his life that I found very winning. And he really seemed to connect with the students who attended).

Trek's three trailers (which-- and I apologize if I'm incorrect-- I don't think Grube worked on) work hard to create a sense of connection across disparate groups (Trekkies, casual fans, openly hostile hipsters, curious tweens), and illustrate the kinds of marketing multiplicities Grube talked about. The first-- which debuted in front of Quantum of Solace last fall-- didn't even show the words "Star Trek" until the end, instead choosing to emphasize spectacle and non-stop action as a drawing point. The second-- a Super Bowl TV spot-- was a short adrenalin rush of sky-diving and space explosions that also began to flesh out some of the character dynamics, and introduced fan favorites like McCoy. The third pulled all these threads together while using music to make the whole thing feel awesome and epic.

All three emphasize the involvement of J.J. Abrams, whose presence acts as a balm to both Trekkie and non-fan alike. As the co-creator of Lost, Abrams comes with a certain critical and commercial cachet that's perfectly balanced on the line between nerd and mainstream. To one audience, it's a message that this cult favorite is in safe and knowing hands; to the other, it says that you can trust him to lead you into unfamiliar and perhaps forbidding lands, and to get you out in one piece.

I've only seen a couple of episodes of Lost-- I know, I know, it's on the list-- but I trust Abrams as the creator Alias (one of my favorite television shows), and as the director of the best Mission: Impossible film. In both cases, Abrams displayed a keen and imaginative sense of action and genre fun that was deeply infectious-- M:I 3 was as stylish and well-paced an action ballet as we've seen in recent years. More importantly, both texts were determined to locate the human heart amidst all the action, and to constantly remind us of the action's emotional stakes; Alias, especially, was fantastic at using spying and subterfuge as metaphors for larger questions of identity, and strained family relations.

"Family" is at the heart of Star Trek, too, just as it is for nearly every great TV show (whether that family is biological or ad-hoc), so I have great hope that Abrams will be able to rediscover that sense of playful (and more than slightly dysfunctional) family dynamics that some of the recent Trek films have lost. And if he doesn't, we still have Bruce Greenwood as Captain Pike, Simon Pegg as Scotty, John Cho as Sulu and a cameo from Leonard Nimoy to look forward to (and yes, I feel twelve again just typing all that).

For those of you who can't get enough hot Trek marketing action, Kevin Church has linked to a page of fantastic Trek posters designed for the European market. Click, and drool.
Labels: General Geekery movies Oberlin Star Trek Trailers TV

dave said…
Thanks for the great post--I am starting to get more and more interested in this film. Also, your comment on ad-hoc families really touched on an important aspect of most tv shows, especially, that I grow to love--that sense of different characters not connected biologically who somehow manage to make surprising connections. I think it's absolutely in the best of Whedon's work and seems to be one of the recurring tropes in almost all of my personal favorites in television (even older shows like Cheers or MASH).
March 30, 2009 at 6:41 AM

Brian Doan said…
Dave,
Yeah, Whedon has called it "the family that you make"; I remember Phil Wegner talking about it in a paper about Buffy at the MRG conference several years ago. I agree that a lot of great shows have that quality, and I've been thinking about it again while re-watching THE WEST WING (which might be the best example of it-- Sorkin's shows are so deeply intertwined with questions of grace and family).
March 30, 2009 at 1:08 PM

Alex Jones said…
Hi Brian,
I'm with MovieZen.com - we are a large and growing (500,000+ visitors per month) website focused on movies and celebrities - our Hollywood homepage is at http://www.moviezen.com. We've read hundreds of Hollywood-related blogs and we think yours is awesome! We would love to add you into our blog roll and explore more ways of tapping into your expertise if you are interested.
Look forward to hearing from you!
Thanks! :)
March 30, 2009 at 1:59 PM

WelcometoLA said…
Wow, i thought the last trailer I saw in front of Duplicity made it look extremely action generic. I hope I'm wrong. And, sorry, I REALLY disagree that Abrams' MI was the best. No way did he top either De Palma or Woo. He's simply not a better director than either of them. And the plot in that last one was far-fetched on the usual far-fetched summer blockbuster scale.
March 30, 2009 at 9:26 PM

I like the De Palma and Woo films quite a bit (especially the Woo), but don't think they were better than the third one. De Palma's is a fun gizzimawig of a cinematic toy-- the generic tropes of the spy film give him a wonderfully poppy canvas to hang his usual stylistic tics on-- but in the end its convoluted narrative and insistence on subterfuge within subterfuge within subterfuge makes it feel extremely distant (like most of the De Palma I like, it's icily brilliant without being too involving).

I love John Woo, and will defend his slo-mo against all critics, and the second M:I is fantastic, as keen an homage to NOTORIOUS as we're likely to see. It hasn't aged as well as I'd hoped-- I liked it a lot more on initial viewing than I do now-- but its combination of sleek action and colorful sensuality is spectacular.

I just think the third one took the best elements from the previous two-- the generic play, the team ethic, the crazed villains and the damsel in distress-- and used them better than the other two films did. In a way, Abrams' experience in television is useful here-- he paces the "bumps" of the action narrative very well, and brings the greater focus on character that TV's more limited budgets force along with him to the big screen. The action scenes are gorgeously staged, and best of all they have a Bondian humor to them that the more po-faced (if spectacular) action of the previous two films lacks-- the humor drew me in and made things more exciting rather than less (like the best Bond movies-- or the Indiana Jones films-- you laugh at the imaginative audacity of the scenes even as you get caught up in them).

Plus, you know, Phillip Seymour Hoffman. No bad there (he's like the rich man's Paul Giamatti).

nd the plot in that last one was far-fetched on the usual far-fetched summer blockbuster scale.