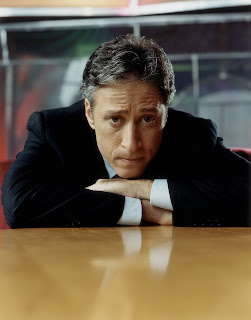 The Daily Show sure picked the wrong week to go on vacation...

Via Steve Benen, I discovered that CNN White House correspondent Ed Henry had posted a fatuous "play-by-play" of his questioning of Barack Obama at Tuesday night's press conference. If you missed the conference, Henry asked Obama two leading questions about why he responded so "late" to the AIG bonuses; Obama responded, "Because I like to know what I'm talking about before I speak."

In the two days since, CNN has promoted Henry as a tough-talking realist, a Helen Thomas for the millenium (even as the real Thomas looked like she could barely stifle her amused disdain for her colleagues' often silly concern trolling at the press conference). Henry's website salvo is the latest piece of this campaign, a Spy vs. Spy narrative so hilariously over-the-top in its detail that if Henry seemed even a scintilla smarter, I might suspect it was parody:

I was heading into this event with the same strategy: make news on something unexpected (I won't tell you which topics I was working on cause it would ruin the surprise for a future presser or interview with the president).

But on Tuesday night, as I sat in the front row nervously reviewing my hypothetical questions written out in longhand (decidedly old school), I kept thinking back to a conversation I had with Wolf Blitzer Saturday night at the Gridiron dinner.

He said that when he was CNN's Senior White House correspondent, he liked following up on a question the president had ducked earlier in the newser.

When you press a second time, you may be surprised with the second answer. And then rather than call on me 10th, the president called on me at about sixth.

Still early, so nobody had asked AIG yet. Plus my "sidebar" question now seemed off-point so early in a newser focused on the economic pain in the nation.

The pressure was on now because the president had called on me. Someone handed me a microphone, millions were watching, and it's scary to think about changing topic in a split second because you might get flustered and screw up.

But it's fun to gamble and like any good quarterback (though I was never athletic enough to actually play the position), I decided to call an audible.

So I went hard on the AIG question, and took Wolf's advice and followed on a couple of colleagues who got pushback from the president when they asked about how his budget numbers do not seem to add up.

The president, like any good politician, decided to pick and choose what to answer. So he swatted away the budget question and ignored the AIG stuff.

So I waited patiently and then decided to pounce with a sharp follow-up. From just a few feet away, I could see in his body language that the normally calm and cool president was perturbed.

But it's in moments like that we sometimes find out what's really on a president's mind. In this case, he's not happy about the scrutiny on AIG. So he did slap me down a bit.


Benen sums up Henry's self-regard with his typical understatement:

There are plenty of circumstances in which a professional journalist is justified in not only reporting on a story, but exploring the work that went into the story. Woodward and Bernstein, for example, not only broke Watergate, but went on to write at length about their legwork behind the scenes. Many war correspondents will do the same thing -- report on the conflict, and then later reflect on the process of reporting.

But asking a question at a White House press conference probably doesn't meet the same standard.

Even funnier, though, are the comments on the CNN article, which once again highlight the vast gap between the Bizarro world of what Digby calls "The Village" Beltway crowd, and those Americans existing outside of it. Over at No More Mister Nice Blog (from which Benen originally linked), a commenter sums it up nicely, "Really the comments in reply to that article on CNN's website are quite keen."

One CNN commenter notes "As my son would say, you got owned"; another compares Henry to Seinfeld's George Costanza, "in the episode where he thinks of the perfect 'comeback' after the fact. Thanks for sharing. Seriously, get a grip Ed." (I find this comparison entirely apt, although Henry's overheated post-hoc reasoning actually reminds me more of Michael Scott's cluelessly self-aggrandizing interviews after one of his frequent foul-ups). Some comments are brief-- "Your question was trite"-- and others note Henry's own strange body language ("When I was watching the press conference and your follow up question, I thought you were going to get up out of your seat and slap him. You looked very upset."), while still others point to the elephant in the room:

I thought the question was delivered in a rather snide and confrontational tone for the nature of the subject matter. After all, Mr. Henry's tone seemed like he was asking the President why he kept on reading a children's book for 11 minutes after hearing that the country was under attack. Unlike that well-documented event, I do not think that the AIG raises required any immediate public reaction from the President. Did Bush get pressed about that lapse in leadership by Mr. Henry or anyone else in the lame press corp that followed Bush's lead right into Iraq?

Unsurprisingly, a note at the bottom of the piece informs us that "This story is no longer available for comments."
Labels: Media Obama Politics Random Oddness TV

Brian Doan said…
ROTFL! OMG, your question was sooo cool, Ed! I saw Chuck Todd out of the corner of my eye, and OMG, he looked soooo pissed he didn't think of it! Pwned, Chuck! Hey, I heard Jake Tapper and Cokie are meeting at the mall after school-- we should totally text them and go. As Michael Steele said to me at the smoothie place, it'll be off the hook!
March 29, 2009 at 7:59 PM

a. bartlet, m.d. said…
What-evs. Everybody knows MoDo thinks I'm the kewlist. So suck on that. B-to-the-O thinks she's, like, gross, but I think I can, like, make that work for me when prom time comes around. Old school. Like LiLo pretending to be all gay and stuff. McSteele don't call me E-Hank fo nizzle, you know.
March 30, 2009 at 1:11 AM