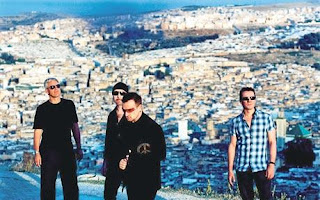 There's an interesting piece in today's New York Times about the genesis of the latest U2 record, No Line On The Horizon, which comes out Tuesday, but has been available for free streaming at the band's MySpace page for the last week or so. My impressions of the album are mixed so far-- I need to really sit down and listen to it when it's officially released this week, to get a full feeling for it-- but I've been intrigued by how the album's been received in America and Britain. In terms of qualitative judgment, there's no real difference so far-- Uncut, MOJO and Q in the UK, and Rolling Stone, EW and the Times in America all seem to love it (some of these responses have been linked at the band's website).

But the British articles frame the album as a return to the band's experimental period, between Achtung Baby and the highly underrated Pop. They happily toss around words like "offbeat", "departure" and "speculative" as positive adjectives, whereas in the American context, those terms seem to be taking on a perjorative connotation, or a least an air of skepticism. EW's music critics are generally smart and open-eared, but Jeff Jensen's review, despite giving the album an A-, is a revealing set of panic moments:

The warning has been sounded. ''Danger! Danger! U2 are experimenting again!'' This is not exactly welcome news for those who remember the band's attempts at reformulating their cathedral-rock sound with of-the-moment trendiness (Zooropa, Pop) as something to be endured, not embraced, and who had been thrilled by their return to ''old-school U2'' on 2000's All That You Can't Leave Behind. Only once, with Achtung Baby, have Bono and Co. ever stretched far and found glory.

So, we disagree on Pop and Zooropa, but what really intrigues me is the subtle use of "those" in the second sentence; what Jensen really means, as the rest of his review bears out, is "me," but he seems to need to frame his own preference in the second person-- the implied community that chooses to read U2 in a rather narrow frame of "authenticity."

Jon Pareles' article in the Times, while not a review, further builds this myth by suggesting that "Once the band reached the arena and stadium circuit in the 1980s, it stayed there. It has had no lineup changes, no breakups, no reunions and no catering to nostalgia." It's a definitive statement that works to recast the last ten years of the band's career, which to my ears (see, Jeff? First person isn't so hard) have been all about nostalgia. The straight-ahead, three-chords-and-the-truth rock of All That You Can't Leave Behind and How To Dismantle An Atomic Bomb were purposely designed (the band freely admitted when they were released) as auditions to once again be "the biggest band in the word" after the artier digressions in the 90s; they evoked precisely the intended, Pavlovian response from critics who will always hear guitar chords as somehow more meaningful than dance beats. In addition, the band released three greatest hits collections and numerous DVD concert packages, a sure sign of creeping Jaggerism whose most egregious moment came on their 90s greatest hits disc, which chose to radically revamp several songs from Pop in the style of ATYCLB. The gesture stripped those tunes of their ambiguity and mystery in favor of a simplistic 4/4 rhythm that further reinforced the myth of "RAWK" realness. It was shameful, really.

There's nothing wrong with Dismantle or All That You Can't Leave Behind-- I love them a lot, actually-- and I admire the band's desire for bigness, its generous wish to spurn hipster distance and reach as many people as possible (Pareles quotes Bono in the interview: “I’m interested in commerce,” he said. “The excuse for bigness is that songs demand to be heard if they’re any good. And without the kind of momentum of being in a big rock ’n’ roll band, you won’t get your songs heard"). And the more conservative thread Jensen follows is hardly unique to him (oddly, for a form that is, in many ways, the fastest-changing and most modern of all media, pop music continues to be framed by critical discourses that seem trapped in a vision of '68 glory, that look for their meaning in lyrics when they should be looking in timbre).

It's those horizon lines of criticism that fascinate me, the ways they suggest that conventional wisdom and herd mentalities aren't limited to politics. And they feel especially relevant to U2, not only because they are one of the biggest bands in the world, but because from ZooTV onward, that question of framing and image has been woven into both their stage shows and their music. Another quote from the Pareles piece:

It strikes me that criticism is balanced on that same horizon line, between self-conscious distance and ecstatic release (again, it's less about the idea than the timbre). Is it possible to find a form that can capture in its critical explorations the feel that Pareles finds in U2's music, a tone that is "determinedly intuitive: a collation of momentary impulses and collaborative sparks" rather than tired, overarching thematics?
Labels: Blogging Media Pop Music Theory U2 Writing

Anonymous said…
Hey--great post. In answer to your last question, I wonder if it's not something between the two extremes--a dialectic of intuitive moments of the individual critic and the larger structures shared by the audience (or other readers and critics).
March 3, 2009 at 8:43 AM

Brian Doan said…
Thanks, Dave. I suspect you're right-- finding a way to bridge any potential gaps between the writer's own obsessions (which might be quite idiosyncratic and intuitive) and his audience's more general frames of reference. I just wonder if there's a way to do that which retains the strangeness and mystery and whatnot that the critic feels as she reads or watches or listens to the text.
March 3, 2009 at 8:29 PM

Anonymous said…
I think there is a way to retain that strangeness and mystery--I think you do it well in your entries here, for example.
March 4, 2009 at 7:24 AM