Mose Schrute Has Left The Building 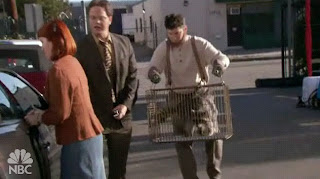 Wow, David Eckstein must have more pull than I thought.

I was traveling last week, so I didn't know until today that the world's best sports blog, Fire Joe Morgan, had closed shop last Thursday. The blog--run by a trio of comedy writers that included Office writer/producer (and portrayer of Mose) Michael Schur-- was nominally about baseball, and the idiotic media coverage that propagates its most reactionary myths, but you didn't have to be a baseball fan (or a fan of any sport) to appreciate it. Its larger theme-- that the bigotry, laziness and arrogance of conventional wisdom end up distorting discourse around any topic-- is certainly one that applies equally to politics, cinema, and any number of other subjects. FJM's take on baseball was similar to that of Michael Lewis' Moneyball (a book these sabermetric fans frequently cited)--that without even realizing it, reporters were replicating accepted falsehoods instead of seeing what was right in front of them on the field; Eckstein was FJM's mascot, not because he was a bad player, but because his mediocrity was misread as momentary greatness by a sports press more committed to ideology than actuality.

Plus, they were really, you know, funny. I couldn't help but hear The Office's Jim when reading one of Schur's posts. An "exit interview" with Schur and his partners in crime can be found here.
Labels: Baseball Blogging Media Sports The Office TV