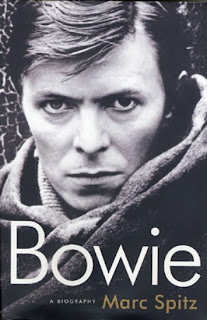 I recently finished Marc Spitz's new biography of David Bowie. The book itself, which I hope to blog more about soon, is something of a mixed bag, but its great gift is to cause readers to go back and re-discover the music; I've been listening to everything from Hunky Dory to Outside to Let's Dance to Lodger with renewed appreciation for Bowie's talents. On this cold and snowy weekend (at least for those of us in the north), it felt like a good time to rub up against Bowie's avant-rock heat, and especially to return to my favorite song of his, " 'Heroes'."

Recorded as the title track from his 1977 collaboration with producers Brian Eno and Tony Visconti, and featuring the stunningly layered guitar work of Robert Fripp, " 'Heroes' " (the quotation marks around the word were a deliberate irony on Bowie's part) tells the tale of a young man and woman in love, but separated by the Wall on either side of a divided Berlin. "Heroes" was recorded in West Berlin (it's usually marked as part of Bowie's "Berlin Trilogy" along with Low and Lodger, although that's a stylistic gathering and a nod to Eno's involvement, rather than an accurate geographic marker-- only "Heroes" was actually recorded in the city). Escaping a Los Angeles existence that had produced brilliant music on Station to Station, but had also been soaked in drugs, mysticism and paranoia, Bowie decamped to Europe with Eno, Visconti and Iggy Pop to clean out his system and find renewed aesthetic inspiration. For my money, this period is his most creatively fruitful-- Eno's taste for offbeat arrangements, improvisation and experimentation blended brilliantly with Bowie's gift for melodicism, conceptual imagination and theatricality. While Eno and Bowie would separately go on to make good and great music up to the present day, it's arguable that neither man would ever again find such a sympathetic collaborator.

Naturally, the best place to go after recording your masterpiece in the heart of the 1970s European avant-garde is...The Bing Crosby Christmas Special! Then again, what's more surreal than a video framed by Uncle Bing's words of wisdom?

By 1981, Bowie was a hero himself to many of the New Wave, post-punk and neo-glam rock bands that followed in his wake. He would write and record with one of those bands, Queen, on "Under Pressure," and then pay tribute to their late lead singer, Freddie Mercury, in 1992 (a performance that also marked a reunion with Spiders from Mars co-conspirator Mick Ronson, who died just a few months later) :

Ten years later, after Tin Machine and further Eno collaborations and tours with Nine Inch Nails, Bowie would perform the song on a tour of smaller theaters and arenas. There's no Ziggy Stardust here, no Brechtian performance artist and no Glass Spider stage pyrotechnics; there's just a 55-year old soul singer confident in his legend and comfortable in his skin. I love the stripped-down, funkier arrangement here, the way he walks out (tie undone) like a post-modern Sinatra, and uses a Lou Reed-like growl to slowly build the song into something overwhelming and transcendent: