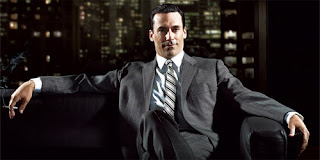 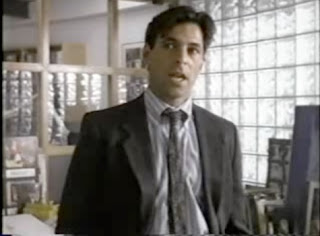 The second season of thirtysomething arrived in the mail the other day. I was too young to appreciate the show when it debuted in 1987 (I was fourteen, and found it self-indulgent and whiny, even as I devoured other totems of boomer culture, like Beatles reissues and Rolling Stone), but now that I'm the same age as the Steadmans, I find its depictions of the suburban quotidian and the compromises of youth-on-the-verge-of-middle-age fascinating. Sometimes, you have to be in just the right moment for something to hit you, a lesson that all of the series' confused characters learn again and again on their varied, stumbling paths towards a kind of grace.

It helps that creators Marshall Herskovitz and Edward Zwick brought a keenly cinematic sensibility to the program that allowed them to play with the square space of the '80s television in off-beat ways; along with Michael Mann's Crime Story, Garry Shandling's It's Gary Shandling's Show and Glenn Gordon Caron's Moonlighting, thirtysomething was one of a handful of prime-time television programs in the 1980s determined to make an aesthetic virtue out of self-consciousness (Pee-Wee Herman and David Letterman were working the same groove on the daytime and late night ends). Zwick and Herskovitz's film pastiches, dream sequences, interweaving of musical numbers and constant intertextuality can feel a bit heavy-handed two decades later (and no doubt did at the time), and not all of it works; but it's never boring, often witty, and more often than not an effective way to connect us with the characters' tangled emotions. Even better were their subtle plays with space: the mise-en-scene of the Steadman house, with all its family responsibilites, often feels cramped compared to the brightly-lit glass enclosures of the "boys will be boys" advertising office, a sensation enhanced by the framing of the former in tight medium- and close-up shots, and the framing of the latter in spacious long shot. thirtysomething was often mocked for its earnest self-examination, but the layered visuals and experimental sequences twist the straightforward dialogue and naturalistic (and uniformly excellent) performances into something more ironic and ambiguous: the characters might be painfully self-involved, but the show is watching them with a distant-yet-sympathetic eye.

I thoroughly enjoyed thirtysomething's first season when it finally hit DVD last fall, after being in television limbo for far too long (honestly, if multiple seasons of Too Close For Comfort could be released on DVD, this seminal program should not have had to wait almost twenty years after its cancellation to see the light of day). Season two's premiere doesn't quite feel up to par with the episodes in the earlier box-- it writes the characters in a shorthand that feels barely sketched in, and relies too much on a sweet-but-slight flashback to the house's 1940s tenants for its strained emotional payoff (the second season debuted after a contentious writers' strike in 1988, and this first episode feels rushed to meet the marketplace). But I have faith it will get better as it goes, especially since I know the wonderfully Mephistophelean advertising executive Miles Drentell is right around the corner. Drentell is Michael Steadman's id, what he both fears and longs to be at different moments, and it's not hard to see how Mad Men creator Matthew Weiner would blend Drentell and Steadman into Don Draper all those years later, creating the fierce alpha male with the wounded soul. 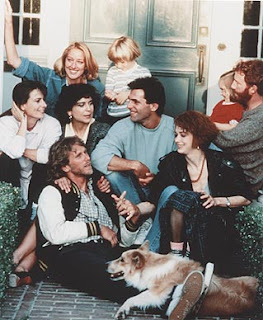 In the meantime, I'll enjoy the tiny details of the show-- the plays of light and shadow, the grace notes of an actor's glace or gesture, and the wonderfully cluttered bric-a-brac of the office desks and bedside tables. Those are the little things that we too often rush by on our way to 'meaning,' but that thirtysomething reminds us are the keys to unlocking the strange, wonderful mysteries of the everyday.
Labels: Fun With Screen Grabs Mad Men thirtysomething TV