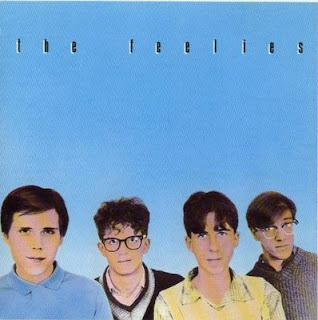 After a glorious six weeks down south, I'm back in Snowberlin, where the frost is on the ground and the white flakes are flying through the air; it seems like a good moment to cocoon, put on the Feelies and give some attention to my long-neglected blog. School starts up again next week, so I don't know how frequently I'll post, but I'd like to take a moment to call your attention to other folks in the blogosphere, who are both more industrious than I, and offering a lot of great reads:

--Everyone's favorite stuffed bull is back with his annual "Fun Fifty" overview of the funnest comics from the previous year. As always, be prepared to guard your wallet-- Bully makes everything he mentions sound like a must-have. But even if you're allergic to four-colored fun, Bully's witty voice and generous sensibility make him an essential read.

--Glenn Kenny is mourning his lack of an Oscar nomination today, but he's working through it by offering fascinating insights on the late Eric Rohmer, the pitfalls of press junkets, a keen appreciation of the crucial new Rossellini box set, and a counter-intuitive defense of Ishtar. As my friend John West would say-- go, read.

--Speaking of the sublime Mr. West, he's back to blogging after a winter break/end-of-semester hiatus, and he's tackling everything from the Dollhouse finale to the I-pad to the relationship of the long-form drama to the half-hour sitcom. As always, John writes in a voice that's curious, open, humorous and righteous without being self-righteous. Go, read.

--Yeah, Up got two Oscar nominations today, one for Best Picture and one for Best Animated Feature. Wanna make something of it?? Then go over to Cinema Styles, where Greg Ferrara unleashes his fury on the cult of Pixar and starts an interesting dialogue in the comments section. The fact that Greg is wrong (so, so wrong) about Up and Ratatouille doesn't change the smart, funny and usefully provocative nature of his argument. And stick around his site and check out great posts on Inglorious Basterds v. The Hurt Locker, 1941, and the brilliance of Bunny Lake Is Missing's opening credits (he is so, so right about those).

--Bill R. has been on a tear this week, offering wonderful screen-grabs of two very different Andersons, a nice remembrance of J.D. Salinger, a strange anecdote about work, and a fascinating look at one of my favorite films, A Face In The Crowd. And all this from a guy who's always apologizing that he doesn't blog enough.
Labels: Bill R. Blogging Bully Glenn Kenny Greg Ferrara John West Joss Whedon Links movies TV

dave said…
Love the Feelies pic! Still one of the best live shows I've ever seen (and surprisingly, given the low-key sound of their studio recordings), one of the loudest.
February 2, 2010 at 10:28 PM

Brian Doan said…
Dave, glad you enjoyed the picture! I downloaded the album the other night and have really been enjoying it-- so cool you got to see them live! And also, dude-- you HAVE to check out the new Criterion Rossellini box. It's truly spectacular, especially given your interest in poetics and documentary. Great, great extras, too.
February 2, 2010 at 11:45 PM

dave said…
Yep, it's on the list (the Rossellini box). I've taught all three films at one time or another, and I'm really interested in seeing it given its well deserved--and overdue--attention. Can't wait to see it.
February 3, 2010 at 8:01 PM

dave said…
BTW, if you are digging The Feelies and don't have The Good Earth, I'd HIGHLY recommend you get it IMMEDIATELY. Wonderful, wonderful album--one of my all-time favorites.
February 3, 2010 at 8:02 PM

Brian Doan said…
Yeah, I listened to snippets of The Good Earth and really liked it. I've been downloading a lot lately, and feel like I need to step back from the i-tunes for awhile (:, but I'd definitely like to get it later. I think you will really like the R. box-- PAISAN is such an extraordinary film.
February 3, 2010 at 8:20 PM

Brian Doan said…
Greg Ferrara is the kindest, bravest, warmest, most wonderful human being I've ever known in my life. Now, if you'll excuse me, I have some playing cards to turn over...
February 5, 2010 at 10:21 AM