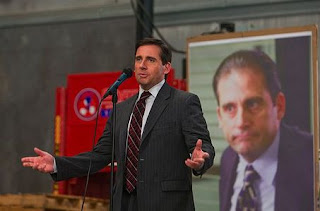 So, it turns out Santonio Holmes wasn't the only one pulling out a game in the final seconds last night.

After a month of episodes that seemed more and more manic and less and less inspired, The Office popped up post-Super Bowl with their best episode in quite some time. From the pitch-perfect slapstick of the pre-credits "fire drill" to the delicious mixture of pathos and humor at Michael's warehouse "roast" to that final, heart-in-the-throat hug between Pam and Jim, The Office somehow managed the neat trick of using the stunt scheduling of that post-game slot to expunge the bad feelings of the last three weeks, and reaffirm its place as TV's best romantic comedy.

I knew we were in for a good time from the moment Dwight smiled menacingly at the camera, then got a blowtorch out of his desk. Deciding that PowerPoint was a "boring" way to teach fire safety, he staged a real-time exercise by locking all the doors and methodically setting the room on fire, then watching gleefully as his panicked co-workers knocked one another out to escape (it's a sign of how well-written this episode was that this primarily physical scene still revealed so much about everyone's character: Jim does his best to get out without causing harm, Michael wants to help but botches everything, and Kevin goes straight for the snack machine).

That sense of running in circles around a locked room acts a nice metaphor for the rut the show has found itself in since returning from the Christmas break. There have been some funny moments here and there the last month, but it generally felt like the writers were content to sacrifice the texture and tone they'd so painstakingly established in the first four years in exchange for obvious jokes; the cast found themselves reduced to mean-spirited cartoons instead of the three-dimensional characters they'd been in past seasons.

So, when Dwight was called (repeatedly) on the carpet for his inappropriate actions, it seemed like a mea culpa from the writers for the slapdash narratives of the last three weeks. "I'm worried, Dwight," Michael says in the car ride home after one of these meetings, and although Steve Carrell spins the line with his usual deadpan skill, the rest of the episode felt like an attempt to return the workplace to a state of calm and sanity.

There were so many nice little touches in this episode: the hilarious "star cameos" that were cleverly seen only on a computer screen (a nice commentary on both the hokey way these guest appearances always stand "outside" the rest of the narrative, and an acknowledgment that we so rarely watch TV on an actual television these days); the inappropriate rimshot from Michael when Meredith mentions how he hit her with his car last year; Darryl's asking if Michael recognized one of his warehouse workers; Andy singing "Stayin' Alive" in perfect falsetto; and the way the Pam and Jim plot line snuck up through all the goofiness.

That last bit might be the most important: in the midst of all the craziness in the last several episodes, Pam and Jim's relationship almost felt forgotten (and when it did appear it felt strained or stupid, as in their face-off over the office furniture). It's hard to craft a real relationship when the writing seems determined to prevent any real humanity from coming through. But tonight, "PB&J" once again felt funny, vibrant, sad, uncertain, and ultimately affirmed. Pam's monologue in the hallway to Jim wasn't just a sweet moment of ooky love, but also a reminder of the warmth and real feeling that The Office can do so well.

Of course, this was followed by Andy overhearing Pam's declarations to the camera, misunderstanding them (a priceless, blurry shot of Ed Helms in the background, throwing his papers in the air in frustration, was the perfectly dry counterpoint to Pam's sentimentality in the foreground), and then ranting to the camera about the differences between film criticism and food criticism. But that's The Office's sweet spot, that strange place where the sublime and the ridiculous dance in perfectly awkward harmony.
Labels: football The Office TV

bill r. said…
I liked that Michael thought the name of the warehouse guy who gave him a ride home might have been "Roy".