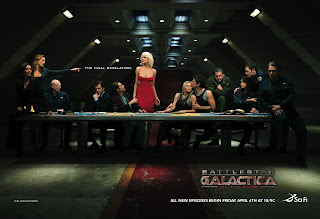 I can't believe there are only five episodes left.

A few weeks ago, I mentioned how good Battlestar Galactica's final-season premiere was, and since then, the show has only gotten stronger, moving with the grace and assurance of a prima ballerina towards its final (and no doubt devastating) denouement. This has almost always been one of television's strongest shows (a weak third season aside), but right now I think it's better than it has ever been: its current balance of action and character development, narrative momentum and time-stopping visual punctuation, mythic arc and touching aside, suggests a creative team at the height of its powers.

It's hard to write about the last four weeks without offering plot spoilers (which I certainly don't want to do), so let me just say that these final episodes offer both a return to core principles--a reaffirmation of the very textured investments we have in the show's primary characters--as well as some fascinating and infuriating (but in a good way) new twists that raise as many questions as they answer.

That sense of back-and-forth between change and tradition was at the heart of Friday's episode, "No Exit," whose title speaks to both the uncertainty of any kind of narrative closure for the program, and the larger existential models so much good sci-fi has worked within. After the last two weeks of action-packed twists, Friday's episode felt like a kind of expositional breather, a narrative and thematic frame with which to order and make sense of the disparate events of the last four episodes. It presented a good deal of back-story on the Cylons and also provided context and future directions to the quorum questions that previous episodes had raised.

At the same time, it used these exposition-heavy moments as illuminations of character. We learned a lot about the twisted family dynamic between Cylons Ellen and John; there was a very nice scene between Lee and Roslin that worked both as drama and comedic relief (and a reminder of the nice chemistry between Mary McDonnell and Jamie Bamber, who has really come into his own this season); there were several nice Tyrell-Adama moments; and there was the way that Anders' storytelling offered a lesson in visual narrative: even as he's relaying what seems like crucial information for understanding the series, we are constantly drawn, not to what he is saying, but to the reaction shots of the various folks surrounding his bed (especially Starbuck).

It's in these scenes that the show encapsulates its core question: do we pay attention to the past, the present or the future-- and what happens if we fixate on one at the expense of the other? This question is further enhanced by a reworked opening-- which tied together recreated scenes from the original series and shots from the new series' third season--and by the way that simple cuts took us from the present action about the Galactica back to the events occurring eighteen months earlier on the Cylon base-ship; everything flows so easily that it's easy to lose track of where you are in time, to feel a subtle narrative and spatial vertigo.

So much to think about, and I haven't even mentioned how well the show is juggling the rhetorics of different media, skillfully interweaving cinematic detail, theatrical monologues and the tempos of televisual, serialized narrative. Battlestar Galactica is a show that demands close attention and re-vewing; indeed, it's hard to imagine it existing without DVD and Hulu, without new methods of technological delivery that encourage this kind of critical burrowing. Writing of "the age of mechanical reproduction," Walter Benjamin prophesied an era where cinematic technology would create a "distracted" viewer and break the quasi-religious "aura" of art. But doesn't a show like Battlestar (as well as such DVD-friendly work as Buffy, Lost and The Wire) reverse this progression? Technology here leads not to the constantly darting distracted view, but to a contemplation of vast visual and narrative clues, and the literal ability to freeze (frieze?) the space.
Labels: BSG Buffy Media Theory TV

Anonymous said…
Great post. I'm still confused about the backstory--I found the exposition much too much, even though I understand they're trying to set up the final episodes--but you definitely captured the high points of the episode.
February 16, 2009 at 8:43 AM

Brian Doan said…
Yeah, the density of the backstory was a bit confusing for me, too, but I like to think that was intentional, as a way of getting us into the confused mindset of the characters standing around his bed listening.

john said…
Holy Frack, indeed. I've only just started watching Galactica these last couple of months. Right now, I'm working my way through the third season, but I didn't realize that it was ending.

Also, thoughts on Dollhouse? I just watched the first episode, and I'm waiting for people who know what they're talking about to tell me what to think.
February 19, 2009 at 1:19 AM

Brian Doan said…
Hey John,
Well, thanks for thinking of me as someone who knows what they're talking about! (: I still haven't watched Dollhouse-- I feel like they're about to take my Whedon fan card away-- but I'm hoping to get to it Thursday via Hulu. I'm looking forward to it, but really wanted to get through the BSG eps I hadn't seen first. Glad you are watching Galactica-- it seems like it would be right up your alley. The third season is spotty, but it definitely returns to form in the fourth.

Thanks for stopping by, and I hope your work schedule allows another blog post soon-- I've missed reading your thoughts on the day's events.
February 19, 2009 at 1:31 AM