TV: Some Good, Some Bad 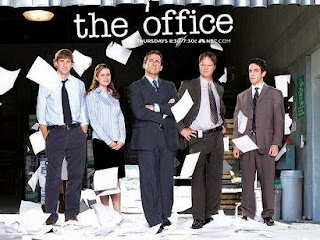 Is it just me, or has The Office lost its mojo lately?

Maybe it's just because the Lovely Companion and I have been re-watching season two episodes, whose delicate mixture of slapstick, wordplay, romance and pathos seems so perfectly balanced-- it's hard to maintain that kind of groove for five seasons. Nonetheless, the last two episodes have felt messy, and not in a good way. The Christmas episode was well-shot but mean-spirited, with characters like Toby and Daryl acting out-of-character for cheap laughs. It ended well, though, with the Phyllis/Andy/Dwight imbroglio offering the show some real comedic and melancholy possibilities (that last, final moment of the ep, with everyone quietly standing there in pangs of mutual guilt, as the camera nervously darted around them? Pure Office brilliance). Which is why it's unfortunate that this week, instead of following up on that tone, we got a shallow, manic, half-thought-out episode whose two parts (Michael dissembling to his boss in New York, Andy and Dwight facing off in the parking lot) never cohered, or even developed on their own in interesting fashions. I still love the show, but wonder if it's in the middle of the kinds of fifth season, we're-out-of-ideas blues that's taken down many another quality program.

On the other hand, last night's double-barreled return of Friday Night Lights and Battlestar Galactica was TV nirvana at its best. BSG seems fully recovered from its third season slump, and has reverted to that unsettling mixture of gray mise-en-scene, staccato editing and moodily poetic dialogue that makes all of its allegory and conspiracy theorizing interesting. I wouldn't dare spoil it for those waiting to watch on Hulu, but there are some shocking twists, some heart-rending character dialogues, and a series of Adama and Roslin scenes that must be seen to be believed. 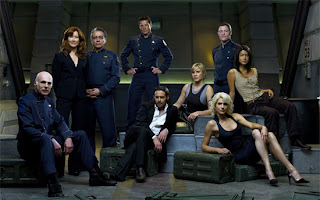 Thankfully, producers Ron Moore and David Eck seem to be using the Planet of the Apes-style finale from last year less as some portentous reveal than as a mere starting point for the kind of knotty, character-driven philosophical quandries that the show is really good at. And they seem to have left the most important questions-- for instance, what's going to happen to Baltar?-- somewhere in a very tantalizing future.

WIth its poor ratings, and the frankly insulting move by NBC to first air it on DirectTV (NBC can find the money for Howie Do It but not a full season of FNL? Michael Scott really does work there, doesn't he?) Friday Night Lights seems resigned to being a critics' darling, and a low-key media phenomenon. Ironically, that seems to better fit it, anyway. It's a real-life, meta-textual reminder of the show's mission statement: that it's not games or touchdowns or big, dramatic moments that matter (although the show has plenty), but the smaller textures and observations of everyday life that we sometimes overlook. 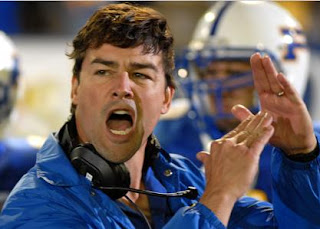 "I need something good to happen," Coach Taylor says at one point, and he might be speaking for TV viewers as a whole. Friday Night Lights certainly seems like it's going to deliver-- from its opening voice-over of radio callers to its final close-up on the face of a determined Smash Williams, the show immediately thrusts us back into the sad, funny, endlessly rich atmosphere of Dillon, Texas, where playful smiles and unspoken glances articulate as much as whole pages of dialogue.

But what dialogue! The Tammy-Buddy Jumbotron face-off was probably the highlight (capturing that mixture of laugh-to-keep-from-crying humor the show is so good at), but there was a wealth of new developments last night that seem certain to keep the show firing all spring. If this is, as is rumored, the last season of Friday Night Lights, it's kind of nice to know they aren't going out with a melodramatic Hail Mary pass, but with the kind of quietly moving, move-the-chains stories that have made the show a must-see for the past three years.
Labels: Friday Night Lights The Office TV

Anonymous said…
Great write-up on these shows--I really enjoyed this entry. I completely agree with you on The Office. I watch it online and usually catch up with 30 Rock right around the same time, and the latter has been so much more enjoyable lately. BSG was an incredible opener, and FNL just gets better!
January 21, 2009 at 7:50 AM

Brian Doan said…
Thanks, Dave! I have faith THE OFFICE will recover, but the recent eps have really disappointed, not so much because they're awful but because they fumble interesting set-ups. But man, FNL and BSG are really good right now!
January 21, 2009 at 10:16 PM