(An ongoing, occasional series inspired by the strange and random juxtapositions called up by my I-tunes function.) 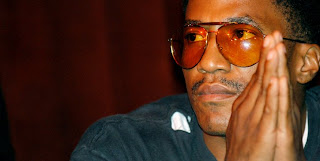 Close your eyes long enough, and you could almost believe that Q-Tip's "Getttin' Up" was a time machine taking you back to 1993. Sampling a tasty keyboard riff from Black Ivory's "You & I," the first single from the rapper's most recent album, The Renaissance, uses that ten-note repetition as a groovilicious launching pad for a lyric that acts as a "welcome home" for fans who might have forgotten Tip's brilliance after the quiet implosion of A Tribe Called Quest in the late '90s:

Sent you a message, sent you an email
Hasty decisions we may still prevail
Both needed breaks, we both needed to bail
Walking thru the corridors of my mind
The hideaways, the nooks, there filled with good times
Memories certainly yes they still bind
Still a common man and yeah that's for sure
Still a bankroll and yeah still can tour
The madness, the thing we had was much more
Come back home, don't be out in the world

Relaxed, witty and generous, the song acts as both mea culpa and mission statement for a musician whose voice sounds renewed after nearly a decade away from our ears. Truthfully, Tip's quirky timbre and jazzy flow-- like a tap dancer bopping across words rather than throwing them down-- mean he could rap the phone book and I'd still probably find it interesting. But given his importance to that early 90s moment of hip-hop that was so formative for me, his return to brilliant form is deeply heartening (besides, you have to appreciate a rapper whose lyrical interests encompass couture, Native American struggles, and comic book hero Luke Cage).

Aimee Mann shies away from that kind of kaleidoscopic vision, often choosing to focus on matters of the heart so personal that you almost feel like a voyeur for putting on the album. 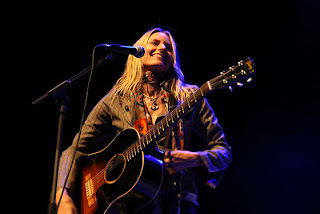 But the passive-aggressive depression of "Save Me"'s lyrical flow is always juxtaposed with Mann's melodic genius, and the wryness of her Joni Mitchell-ish delivery: the instrumentation, and the rise and fall off her double-tracked vocal harmonies, are a lifeline pulling both protagonist and listener away from the edge, and towards a transcendent pop grace.

Pop grace is offered on a consistent basis by tweenybopper favorites the Jonas Brothers, and only our curmudgeonly hipsterism prevents us from hearing it. Cultural tastemakers seem determined to cast Les Bros as millenial Herman's Hermits (who, after all, wouldn't have been out of place in something like Camp Rock), but listening to the sugary bliss of tracks like "Tonight" (with its frantic, New Wavy wall of guitars) or "Burnin' Up", it seems apparent that the Jonas Brothers are skipping down a bubblegum path that's far richer, and less the Archies than, say, early '64 Beatles or mid-90s Matthew Sweet. Like many great pop songsmiths, they're not only unafraid of melodramatic vocal choruses, perfectly placed guitar breaks and delectable musical bridges-- they rush towards them with open arms. Listening to their perfectly crafted singles, you're reminded that toe-tapping and head-bopping are some of the best forms of pop prayer.
Labels: Aimee Mann I-pod Jonas Brothers Pop Music Q-Tip

Greg said…
Brian, you wrote something! Okay, just kidding, that's a bit harsh but it seems like lately you don't do written posts here anymore. I'm assuming time and teaching have much to do with that so I really am just giving you a hard time.

And basically I just wanted to reiterate how much I love Aimee Mann. I could listen to her debut album Whatever over and over - and do! She's done plenty of great stuff but I still think her first two out of the gate, Whatever and I'm With Stupid are her two best albums.
January 7, 2009 at 8:32 AM

Anonymous said…
I don't know as much about the two albums you mention, Jonathan, but I'm a fan of _Bachelor Number 2_. If you say they're better than that one, I'll have to check them out!
January 7, 2009 at 8:51 AM

Brian Doan said…
Hi Jonathan,
Jonathan, you commented on something! (: No, seriously I've just been working and traveling and doing holiday stuff, so blogging has been light. I don't know how much I will post this month-- things are busy-- but I do have some ideas for posts in the back of my head, so we'll see.

Brian Doan said…
Dave,
Bachelor #2 is a great record, isn't it? (Yes, I still say "record"). Songs like "Deathly" and "Red Vines" are some of my favorites. I would've loved to have seen Mann when she was touring with husband Michael Penn a few years ago.
January 7, 2009 at 2:50 PM

Greg said…
Dave and Brian, I pretty much love all of her albums and I actually buy her CDs since she does them independently and doesn't rake in big bucks with tours.

Bachelor #2 is definitely up there. On reflection, I'd probably put it at (no pun intended) number 2, next to Whatever and then I'm With Stupid at three followed by The Forgotten Arm and Lost in Space to round out the top five.
January 8, 2009 at 7:47 AM

Anonymous said…
Okay...I definitely need to get _Whatever_. Thanks, Jonathan! Also, Brian, I too often still say records (or albums). I'm not enough of a music expert to discuss the merits (or lack thereof) of continuing to listen to music on vinyl in a digital age, but I do occasionally still listen to my records (and enjoy them). I cranked up REM's _Document_ the other day--"The Finest Worksong" still rocks!
January 8, 2009 at 8:34 AM