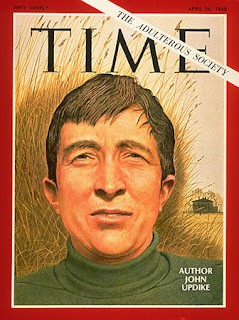 How is it that I've gotten this far in my life without reading John Updike? How can I watch Mad Men and The Ice Storm and Carnal Knowledge and not have read John Updike? How can I be passionately interested in F. Scott Fitzgerald and J.D. Salinger and not have followed that thread through to John Updike, their heir in what James Wolcott described yesterday as "the leafy, torpid suburban sublime", with all its attendant pleasures and anxieties? Even stranger, how could I have read The New Yorker off-and-on for twenty years and not read John Updike, who seems so central to its literary ethos?

More to the point, why do I feel like I've read John Updike, without having perused a word, and why did I feel a sense of loss when I read of his passing yesterday? It's a testament to his talent that I can sense his presence in those places named above, can know that his influence has its fingerprints on generations of artists I admire, much like Joyce does on a generation of artists-- you can feel that something is "Joycean" or "Updike-like" even if you've never picked up a copy of Ulyssess or Rabbit, Run. The imprint is there, and the imprint will remain.

Not that this is any excuse, and these sublime remembrances from Julian Barnes, T. Coraghessan Boyle and others makes me determined to dive into the short stories soon, and then move to the Rabbit books, which Barnes describes in his typically elegant fashion as "a distraction from, and a glittering confirmation of, the vast bustling ordinariness of American life."

Anonymous said…
John Updike's conventional wisdom seems to have affected a lot of people -- I see little quotes of his all over
January 30, 2009 at 4:11 PM

Brian Doan said…
Hi Coffee,
Yes, I think Updike's influence is broad, and will continue to be for some time to come.

Love your blog! I wholly approve of a space so richly devoted to the pleasures of coffee.
January 31, 2009 at 4:32 PM