Songs About Airports IV: "Thank You For Flying US Airways, And We Wish You A Pleasant Life" 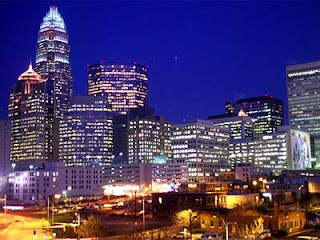 I know that the ticket says "Charlotte Douglas International Airport," but I've really flown onto the set of an abusrdist comedy, yes? And Jim Carrey or Nicholas Cage or Steve Buscemi's about to walk up, tap me on the shoulder, and take my place?

1) While checking in at the counter in Montgomery, they change my departure gate from "4" to "3." So, I head to Gate 3. I sit there for two minutes, until an airport cop moseys over. "Which flight are you on?," he asks.

"This one," I say, pointing to the gate counter (I am the only one sitting in the entire downstairs gate area).

"Which flight?," he says again, and I wonder if I'm doing something wrong. "This one," I respond again, and give the flight number.

"Oh, that's leaving from upstairs," he says pleasantly. "The flights deplane down here, but load up upstairs, so you want to go up to..." and gives me a set of directions that lead me back, naturally enough, to the original Gate 4 that was on my ticket.

Fair enough-- I appreciate his help, and head back upstairs. I sit there for about fifteen minutes, and then see herds of people headed down to Gate 3. My plane is due to board in fifteen minutes, and there's no one at my counter. I ask a flight attendant nearby if she is on my outgoing flight. She is not-- she works for Welta, not US Err-- but kindly suggests that my flight is loading up down at Gate 3, since that's where the US Err flights leave from.

OK. I head back downstairs, where a loud man who reminds me of Buddy Garrity is holding court and talking about his connection times in Charlotte.

2) Twenty minutes to landing in Charlotte, but it feels like an hour (Einstein makes more sense when flying). Night is falling and it's dark, the Lite-Brite set of downtown Charlotte twinkling below us and writing hieroglyphs against the dark land. In my right ear, I suddenly hear the conversation of the man behind me-- some kind of architect, I presume from his words-- and the flight attendant who seems sweet on him. I'll hear this for the rest of the flight, because they don't stop, except when the attendant's call button begrudgingly interrupts her flirtations. They talk about art and designing houses, funding artists and America's future, and the flight attendant mentions her "uppity" nephew who wants to be an architect (I'm not sure how mentioning your "uppity" nephew is a good conversational tactic, but she seems well-versed in the art of passenger chat, so I'll defer to her expertise). Close to landing, she goes to the PA and reads us a quote from Longfellow, then returns to the man with a piece of paper: "Look at this, my nephew drew it," she says in a light southern drawl.

3) I'm two terminals away from my gate, so I dash past the other fliers and down the halls-- until the siren song of the gift shop stops me. Oh, pretty magazines and onboard snacks, why must you sing so beautifully? I grab my magazine and go to the counter. The poor, overworked counter lady (the only one working this shift) is valiantly putting up with a customer who apparently forgot to pay for her T-shirt before leaving the shop. "No, you have to pay for that," the counter lady says, "or else I don't know that you've bought it." The woman seems peeved at this imposition of order, but takes her shirt to the counter. When the price comes up, she slowly gets a stack of credit cards out of her wallet. Yes, she's going to pay this way, as a line of nine people stand behind her (and I suddenly wonder if this magazine was worth it). She meanders through her stack of cards, examining each one before finally settling on her choice. The heroic counter lady swipes the card and the woman slowly signs her name, then slowly returns her cards to their wallet, then slowly puts the wallet back in her purse. She walks away from the counter towards the line of people, causing a slight jostle of the line to let her pass.

4) "Wait," I hear the young man say to the woman next to him in the connecting tube that takes us from the aiport to the plane. "He gave you a bottle of Jamaican rum to take with you, telling you that you had to take it to America. And you did this, and now he's yelling at you, and you think this is OK? Why do you put up with this guy?"

5) Sitting on the runway in Charlotte, the flight already several minutes behind, when the flight attendant's voice comes over the PA: "Is there a [name omitted] on the plane? Your license was just found on the floor. Please ring your call button for assistance." The woman, who sits in front of me in a rakish, pinstriped fedora, does as she's asked. A harried attendant comes over. "Yes?," the flight attendant mutters.

"Can I help you?," the flight attendant responds.

"Well," the woman says tentatively, "my name was just called, and they said they had my license."

"I rang my call button like you asked," the woman continues, as if trying to explain a complex physics experiment to Forrest Gump.

"No," the woman says in a slightly exasperated voice. "I want my license!"
Labels: Anecdotes Travel

Sam Anderson said…
It's great to have a pleasant travel in a plane while flying from an airport. Tourists love such a sweet journey.
short stay parking gatwick