Walk Right Through The Door 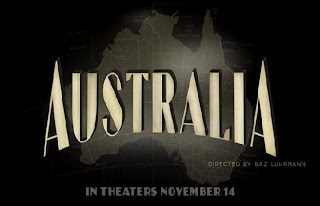 So, the Lovely Companion and I went to see Australia on New Year's Eve, and ended up walking out with an hour left (it's not a bad film, but one that, as the LC rightly noted, finds its logical ending in two hours--and then decides to go on for another hour).

I will get back to talking about my 2/3 experience of Australia another day, but for now I want to ask my vast readership: have you ever walked out of a film? And if so, which film, and why? It's not something most cinephiles (aside from Pauline Kael) like to admit, but I suspect it happens more often than we think, and I'm curious what inspired the need in you.
Labels: Anecdotes Blogging cinephilia movies

Roger Whitson said…
I walked out of Oliver Stone's Alexander AND I almost walked out of 'W.' The first made me laugh too much with its "maybe I'm gay, maybe I'm not" ambivalence, the second just bored me.
January 18, 2009 at 10:08 AM

Uncle Gustav said…
I walked out halfway through Octopussy. I never cared for Roger Moore as Bond -- his stiff arrogance always suggested a pouf in denial -- but this was the pits.

About ten years later I watched it on video and realized that, with some careful cutting, you could assemble a halfway decent movie out of it.

I also walked out of A.K.A. Cassius Clay, the co-feature playing with Brewster McCloud. After Bud Cort took flight like a butterfly, Ali stung like a bee.
January 18, 2009 at 10:21 AM

Brian Doan said…
Roger, I think Oliver Stone is, to borrow a friend's phrase for bad movies, "a must-miss." I heartily endorse walking out of all his films (except for the wonderfully melodramatic WALL STREET, whose 80s cheese I kind of enjoy).
January 18, 2009 at 8:39 PM

Brian Doan said…
Flickhead, OCTOPUSSY is pretty bad, isn't it? Not quite View To A Kill bad (my god, that film is interminable, but still a real disappointment, since I think its first half-hour or so--with that mini-plane opening, the assasination of the secret agent, and Steven Berkoff's mad pontificating as a Russian general--is all pretty enjoyable).

I've never heard of AKA CASSIUS CLAY! I do think it's cool you got to see BREWSTER MCCLOUD in a theater, though-- that's one of those Altman films I've always meant to catch up with.
January 18, 2009 at 8:41 PM

Uncle Gustav said…
The greatest crime of A View to a Kill -- other than Roger's wig and his non-blinking, Village of the Damned eyes -- is the utter disregard for Tanya Roberts' stunning physique. With the exception of one fleeting leg shot (moments like these justify the creation of the pause button), she's covered from head to toe. Her character may have been zilch, but the woman was in her shining hour, all for naught.
January 18, 2009 at 9:32 PM

Anonymous said…
I did walk out of a Jay and Silent Bob flick. Didn't realize you could put so many expletives in one string and call it dialogue!
January 18, 2009 at 10:17 PM

The Dingus said…
All the time.

Brian Doan said…
Larry, I skipped The Spirit because I love the comic too much, and thought the movie looked awful. Glad to hear my suspicions were correct. Too bad about Valkyrie, though-- I thought it might be a fun thriller, especially as I've enjoyed Singer's films in the past.
January 18, 2009 at 11:52 PM

Brian Doan said…
Michelle,
Yeah, Kevin Smith is turning out to be a disappointment, isn't he? Those first three films were so promising, but now he's a bad parody of himself. I couldn't even bring myself to watch Clerks II (although I did laugh at the Sweeney Todd jokes in Jersey Girl).
January 18, 2009 at 11:53 PM

Brian Doan said…
Flickhead,
But see, that's why KILL is so flawed-- sure, she might be beautiful, but Roberts has none of the panache or wit or skill of Diana Rigg, Honor Blackman, and so many other earlier Bond women. She's just kind of... there (and barely that).

But it's interesting-- for some reason this morning, I suddenly thought that Jean Seberg might have made an interesting Bond heroine. Her cool insolence would've played so well off of Connery's.
January 18, 2009 at 11:55 PM

Uncle Gustav said…
Brian, Claude Chabrol made a (very) low budget Bondian (Brechtian?) comedy, known on DVD as Who's Got the Black Box? with Jean Seberg. It's a strange film, not at all what anyone would expect either from Chabrol or the tattered subgenre of would-be 007 flicks, but you can get a taste of Jean as a potential Bond girl there.
January 19, 2009 at 7:38 AM

digital_sextant said…
As a founder of the Bad Movie Club, I can proudly say that I've never walked out of a film. And I'm a bit ashamed of you, Brian. ;) I've turned off a few that I was watching on video, but usually because I wasn't in the mood for them, rather than because they sucked.

I generally won't walk out because I can't wait to see if they crash and burn more or if they redeem themselves somehow.

BTW, Rick: most theatres will give you a "come back for free" pass as long as you leave somewhere near the beginning (first half is a safe bet).
January 19, 2009 at 8:25 AM

Brian Doan said…
Rick,
I understand, but sometimes bad is just BAD. One time I slipped out of a film to use the restroom, then decided I had no desire to go in and catch the rest of the film (it was some Wesley Snipes 'thriller' whose title I can't remember), and went to see a different film (THE ORIGINAL KINGS OF COMEDY) instead.
January 19, 2009 at 8:08 PM

Greg said…
Brian - Sorry to show up late to this but like Rick, believe it or not, I've never left a movie. I paid for, and sat through, A View to a Kill as well as tons of other garbage. I just can't leave once I've paid, I don't know why.

However, rentals is a different story. I couldn't even tell you how many times I've put a movie in, gotten through about twenty minutes or so and called it quits. Sometimes I have the urge to stop but keep watching out of obligation. You see, also like Rick, I have a real, palpable distaste for CGI. But since The Incredibles and Ratatouille had been recommended to me by so many cinephiles I admire I sat through them. But dear Lord, it took all my strength to do so. I don't plan on ever revisiting them.
January 20, 2009 at 9:52 PM

Brian Doan said…
Jonathan, you are a brave man to sit through Roger Moore's witticisms on the big screen. But you didn't like Ratatouille? What are you, a communist?
January 21, 2009 at 2:06 AM

Brian Doan said…
gmoke,
Thank you, thank you, thank you for your mocking of Boogie Nights. I like a number of other PT Anderson films, but have never ever understood the cult around that one. Aside from some strong performances here and there, it always struck me as overblown and (as your comment suggests) unaware of its unintended ridiculousness.
January 21, 2009 at 2:07 AM

Greg said…
Comrade, I thought Ratatouille was an average animated feature. I found the characters either dull(the rat) or annoying (the dumbass chef).

As for Boogie Nights, and not to sound condescending, but you and gmoke do realize that was intentional ridiculousness don't you? I mean, it's pretty hard to miss. Most of the movie is making fun of Diggler (check out the recording studio scene or listen to the commentary track as Anderson mocks him throughout). Anderson wants you to laugh at the hot tub scene, just like Mel Brooks wants you to laugh Gene Wilder in Young Frankenstein. Why would one leave a movie after finding an intentionally funny scene, uh, funny? I mean, if you think the film is bad, okay. I can see a lot of areas one could criticize this movie. But guys, that hot tub scene? It's supposed to be funny.
January 21, 2009 at 10:31 AM

Uncle Gustav said…
When I went to see Cronenberg's Dead Ringers, a cute little family sat down in the row behind us. On the TV ads and the poster, they said this was the new movie from the guy who made The Fly... so mom and dad figured, hey, what the heck?, let's bring little Jimmy and Susie out to see a scary monster movie... even though it's rated R...

It was about fifteen or twenty minutes into Dead Ringers -- a film I like, by the way -- when our neighbors became far more entertaining than what was on the screen. It's been years, but I think there was a bondage scene, Jeremy Iron's "Ellie" or "Bev" tying up what's her name... and mom and dad were audibly squirming, and the kids (seven or eight years old) were squirming, probably because they'd rather be seeing this Weird Shit without mom and dad there... and dad made it obvious he'd rather be there without any of his brood, because when the gynecological-Cronenberg-shiny metal instruments came into view -- and you just knew some of this hardware would be sailing right into what's her name's vagina, well the whole family just upped and got the Hell Out Of Dodge... prodded by mom, of course, who was probably spinning yarns for years about that half hour of film she watched.
January 21, 2009 at 12:06 PM

Brian Doan said…
Flickhead,
Whoa! Great story. I admire that Cronenberg film, but would NEVER show it to kids. It reminds me of when some friends and I went to see HOLLOW MAN (don't judge), and we saw a family walk in, similar it sounds to the one you spotted at DEAD RINGERS. A friend leaned over and said, "They DO know what this is about, right?" Of course, in that case I'm not sure if it was the sex and violence or the crappy filmmaking that would've been a worse thing for the little kids to see.
January 21, 2009 at 10:10 PM

Brian Doan said…
Comrade Lapper,
Well, I suppose I can forgive you your RATATOUILLE hatred, although I disagree with you (it's way better than the wretched CARS, for instance). And I'll trust what you say about Anderson's DVD commentary, too-- I only ever saw the film in the theater, and had no reason to track it down again. But (and this is no comment on what you wrote, just on Anderson), I have to admit that it sounds a little like after-the-fact framing: I'll grant you that scene as satiric, but I think there are other parts of the film (anything with Heather Graham, for instance, or that drawn-out silliness with the drug deal towards the end) that I think we're supposed to find really interesting/moving/etc., and for me those fall flat. But then, I think MAGNOLIA is his really great movie, and it always seems to be overlooked by people more interested in NIGHTS or THERE WILL BE BLOOD, his two least-interesting films.

I wonder if Wahlberg knew the scenes were supposed to be funny, BTW? His humorless response to the recent SNL parody of him would suggest not.
January 21, 2009 at 10:15 PM

Greg said…
I think we disagree again. I found the drug deal to be another scene that played as intentionally funny. I don't know what it is, but we're clearly seeing it differently. I see Boogie Nights as a drama/comedy.