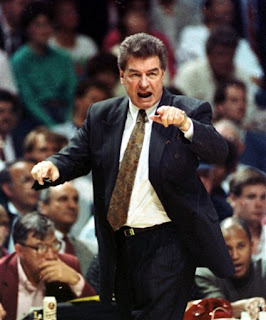 The great basketball coach Chuck Daly, who led the "Bad Boys" Detroit Pistons teams to two NBA championships in 1989 and 1990, then coached the first "Dream Team" to an Olympic gold medal in 1992, has died of pancreatic cancer, at the age of 78.

When I first became invested in basketball, as a fifteen-year-old in Michigan, it was one of Daly's Pistons teams that I followed-- not the championship team of '89, but the even-better team of '88, who took the Lakers to six games before eventually falling. I loved their combination of physical defense of sleek offense, and at the center of it all was the growling-but-dapper man whose players nicknamed him "Daddy Rich." Like his teams, he seemed an embodiment of various paradoxes: he was tough, yet lovable; gruff, yet smooth; full of high-octane passion and focus during a game (that's why I chose the image above), yet by all accounts the epitome of generosity and kindness away from it. His Italian suits and perfectly coiffed hair were reminiscent of rival Pat Riley, but underneath that slick exterior beat the heart of a blue-collar guy who spent years toiling in the CBA and college ranks before getting his shot at the big-time. He was a great ambassador for the game, but also for the city of Detroit, and I can't help but think that battered city could use some of his smarts, toughness and charm right now.