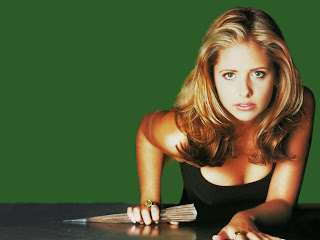 As Buffy The Vampire Slayer's great truth-teller, Cordelia Chase might say, "Know your losers. Once you can identify them all by sight they're a lot easier to avoid."

A Buffy without Joss Whedon or any of the actors from the TV show isn't Buffy; it's not even this Buffy, which at least benefitted from Whedon's script and a game (if misused) cast. I was going to say it was kind of the Beatlemania to the show's Beatles, except Beatlemania at least pretended it was "using" John, Paul, George and Ringo, whereas this reboot would jettison all the supporting characters from the TV show. It's more like CCR without John Fogerty, or the Beatles without John Lennon. And we know how that turned out.

I'm not one who particularly needs a Buffy movie, or an Angel reunion: I like the way Angel ended, and think Buffy was running on fumes by the time it reached its overpraised final episode (a feeling borne out by the hit-and-miss "Season 8" comic). I'm happy to catch up with Dollhouse and wait for the Dr. Horrible sequel. But if you are going to make a big-screen Slayer film, it just seems like bad form to do it without the people who made the show popular in the first place.

UPDATE (4:55 p.m.): Fellow Whedonite Bob also has some thoughts on the matter.

UPDATE II (5/27): Over at More A Legend Than A Blog, CZR makes some interesting points about the irony of a Buffy revival being inspired by the success of the Twilight series. Here's the money passage:

The insanely popular series by Stephanie Meyers is now on target for a Harry Potter/Spider Man level film franchise, which has everyone scrambling for their own hot starlet-on-vampire series. Of course, Whedon's Buffy had nothing but contempt for the "Vampires are cool and I totally want to be one!" crowd that is a significant part of the Twilight fan base. Remember Season 2's excellent "Lie To Me" episode where those goth kids are waiting to be slaughtered by Spike's crew? Buffy referred to them as "The All You Can Eat Moron Buffet." Also, the Twilight series, unlike Whedon's Buffy, has drawn a lot of fire for the troubling messages that it sends out to teenage girls. A good friend of mine, let's call her "Leslie," breaks down what's wrong with Twilight's gender politics with pitiless accuracy. This is her eight-part critique, in its entirety.

"1. It's okay if boys stalk you and watch you while you sleep
2. If you like a boy become totally consumed by him and pretend your friends don't exist (unless you need them for something)
3. If boy leaves you, try not to kill yourself. Lapsing into severe depression and cliff diving is okay.
4. Your parents will get over it if you decide to have your boyfriend kill you and turn you into a vampire
5. It's okay for a boy/werewolf to force you to kiss him b/c you'll realize you kind of love him
6. Be home in time to cook dinner for your dad
7. It's romantic when your boyfriend makes you ask permission to do anything without him
8. It's romantic when your boyfriend is patronizing and treats you like a child

Plus there's something that werewolves do called imprinting, and it's really creepy and I don't want to get into it."

Compare that to Sarah Michelle Gellar's in-charge Buffy Summers, who essentially lived her life according to Fred "The Hammer" Williamson's Three Hollywood Rules (See my About Me up at the top right hand corner). She was always treated as an equal (or more) by friend & foe alike and if anyone forgot to do that, or took her for granted because she was blonde & pretty....she rectified that situation with the quickness.
Labels: Adaptation Blogging Bob Westal Buffy Joss Whedon Media Random Oddness TV

CZR said…
Well said. My initial reaction to this story was something along the lines of "I can beat these people with their own shoes, right?"

Also have to agree with you about Buffy's final season and the sometimes maddeningly uneven Season 8 comic.

larry aydlette said…
But when will there be another series as good as Buffy or the Files? The reality/Jay Leno world is making it harder for any type of series to get that kind of traction again...
May 28, 2009 at 7:31 PM

Brian Doan said…
Well, BSG was pretty great, but that's gone now, too. It's not a fantasy/adventure program, but I'm very fond of Friday Night Lights. Mad Men is great, and in a very different vein, I also enjoy The Office.

But yes, in terms of that blend of fantasy and character and mythic arc that Buffy or The X-Files represented, it's harder to find. I liked the Dollhouse pilot, but lost track of the show during a busy spring-- I'm hoping to catch up with it over the summer.

Oh, and Jay Leno is a putz. I think that experiment will fail, but NBC will be too proud to admit it, and will let it straggle along like a wounded horse for at least a year or two.
May 29, 2009 at 12:28 AM