I'm Not Gonna Write You A Love Song 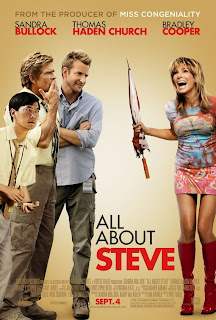 I went to the movies three times this past weekend, and managed to see the trailer for the upcoming Sandra Bullock-Bradley Cooper rom-com All About Steve in front of all three films.

Hoo-boy, does it look bad. Or as CJ Cregg might say, baaaad. For better or worse, embedding has been disabled on the trailer, but you can see it here. Watching it three times in a row not only gave me a greater appreciation for the better Sandra Bullock movies (and really, she can be quite charming in everything from comedy to drama to action films), but made me realize what a missed opportunity the film's taglines and narration really were. I mean, seriously, "Sometimes, it takes a second chance to realize, the ones who never fit in are the ones who really stand out"? That's the best they could do? There's just so much more awfulness here that a gifted copywriter could've worked with. Imagine Mr. Movie Voice saying instead lines like,

"Sometimes, a second chance is all you need to realize that the first chance you had was no chance at all."

"Sometimes, it takes a boot in the ass to realize the lust in our hearts."

"Sometimes, when love comes knocking, this weather van will be a-rocking."

"Sometimes, the holes we fall into, are the ones we never want to leave."

"Sometimes, it takes a hurricane to make you realize the full-gale force of love."

"Sometimes, it takes the guy from Wings to make the dude from Alias realize that true love comes in the form of the chick from Demolition Man (in an ugly wig)."

Anyone want to add to the list?
Labels: Aaron Sorkin Blogging movies Trailers

digital_sextant said…
Sometimes, a familiar title is just what the doctor ordered.
August 25, 2009 at 11:37 PM

Chad said…
Since we're resurrecting Mister Voice to read the tagline, it should be something like: "In a world gone mad, one man makes it All About Steve."
August 27, 2009 at 9:47 AM