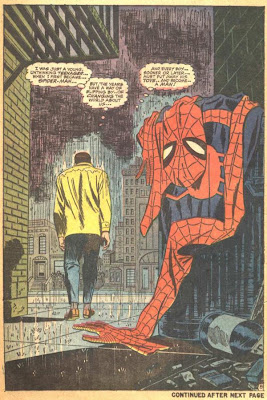 Over at the essential "Comics Should Be Good!" site, Brian Cronin is cataloging what he calls "The Top 70 Most Iconic Marvel Panels", in honor of that company's 70th anniversary (I take issue with the company's decision to declare themselves 70 years old-- founded as "Timely Comics" in 1939, the company wasn't officially called "Marvel" until 1961--but that's a debate for another day, and doesn't undercut the coolness of Cronin's tribute). Scrolling through the master list linked above is the comic book equivalent of one of those Chuck Workman Oscar reels, with panels unfurling gripping image after gripping image. For me, they have a powerful, almost pungently nostalgic flavor-- even moreso than cinema, the still image of a comics page can immediately thrust me back to my adolescence, when I first read the issues where these panels appeared (or saw them reprinted in comic histories).

Beyond nostalgia, though, seeing the panels out of sequence here raises the question Gilbert Adair asked in his crucial book, Flickers : can a single still pulled from a film tell us whether or not the movie is good? Adair is ambivalent on the subject; he admits, though, that some stills, taken out of time and in placed in books like his own, are so evocative when disassociated from a movie that he almost thinks it better to never see the movie they've come from-- why undercut their allure through the explanatory mechanisms of narrative?

I can't say if Cronin's comics images function in the same way: I'm too familiar with almost all of the stories he's quoted so far to come to them in that virginal state. But by wrenching them from their originary spaces (and, intriguingly, not captioning them), their dynamic layouts, garish primary colors and wittily melodramatic dialogue do remind me of the power they had for me all those years ago; seeing them together on a single web page, it almost feels like one large Surrealist comic, where character, logic and continuity give way to the hand of the artist, and the bliss of the image.
Labels: Blogging Comics Marvel movies Superheroes Theory

dave said…
"why undercut their allure through the explanatory mechanisms of narrative?"

...and yet, what's interesting about most of the panels selected so far is that they're iconic _narrative_ moments--"births" (of the heroic identity, at least), deaths, revelations, major character shifts, and so forth. Would you say perhaps that what's iconic here is the tension between the powerful narrative moment and style that renders it? That is, that it's often the combination of narrative and style that makes these images so iconic?
August 11, 2009 at 11:21 PM

Brian Doan said…
Dave,
That's a really interesting point about how the "iconic" moments are also often originary or character-based-- I think that's true, and speaks to how much the form invests-- narratively, stylstically, economically-- in such moments. I wonder if there isn't still an extra layer here, though.

Yes, they are narrative moments, but what I meant was that, taken outside of the larger context, those moments maintain an air of mystery they might not have on the original page-- the Fantastic Four sneaking onto the military base to fly off in their rocket, for example, might not appear to be such if you haven't read the original issue; the character holding the "mutie" sign is not contextualized, etc. Even something like the Green Goblin and Spider-Man in battle, one of the clearer moments, is dissassociated from the larger thematic and emotional context of the story, so it becomes, as you put it, a blend of narrative and style that could simply function as the ultimate Spidey moment.

Like I said, it's impossible for me to separate them out from the stories, because I've read most of them, and my mind just fills in the blanks. But I do think it feels like one of those Oscar clip montages-- for people who've read the books, there's the frisson of remembrance, and for others, there might simply be the kinetic thrill of a particular "shot."
August 12, 2009 at 1:04 AM

dave said…
That's really interesting--I agree with you about the mysterious quality of the images taken out of context, which do seem to ask to be admired (and dwelled in) outside their original narrative. Great post, and great follow up.
August 12, 2009 at 11:09 PM