It's Such A Fine Line Between Clever And Stupid 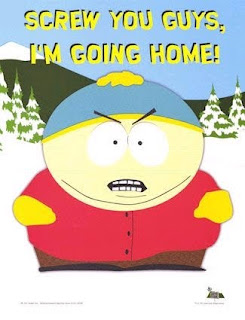 Blogger Andrew Sullivan has a pair of recurring features called the "Malkin Awards" and "Moore Awards," tossed towards those media comments that best embody the crackpot posturing of the extreme right or left, respectively. I wouldn't say that the normally reliable Steve M., of "No More Mr. Nice Blog" fame, has quite entered Michael Moore territory yet, but this post certainly gets my vote for "Most Childish Headline of the Day."

Look, I'm all for bad puns and analogies stretched to the breaking point like Reed Richards, as the last two years of my own blog indicates. But the bitter leap from an Inaugural Day celebration to the war in Iraq is a little bit much for even me to swallow, even as a rhetorical flourish. Just ask my brother-in-law, who spent a little over a year stationed in Iraq, then excitedly took his daughter to the White House just before Obama moved in, if the two situations are at all comparable. At a certain point, rhetorical flourishes count, especially if you're trying to make a pointed political argument with them.

But beyond the violence of the gesture, it simply doesn't make any sense. A pre-emptive war, lied about with doctored evidence to convince the country of its righteousness, designed by its makers to in part fulfill certain religious beliefs, and then celebrated with a too-early dance on an aircraft carrier, seems very different than a quadrennial celebration that every President has. And given the historic nature of this particular President, pissing on that day as an end-point is both churlish and inaccurate.

He and his people seemed to think that there simply wouldn't be that kind of factional strife after the old regime fell; they believed that, despite years of tension between the factions, it would end in an instant and the citizens of the country would immediately see themselves as united.

I mean, really, at what point did Obama himself ever say that the fight was over? I'm certain some of his supporters thought that was true, but attributing that naivete to Obama himself is as silly as suggesting that Steve M. is responsible for any stupid comments that appear underneath one of his blog posts. Isn't this confusing the hopes of his rhetoric with the political realities they always addressed? From the start of his primary campaign, through his general campaign, and right into the first days of his Administration, he's always talked about how hard and long the various fights-- over the economy, health care, foreign policy, race relations-- would be. As many have noted, Obama's always been about the long game, and everyone from HIllary Clinton to John McCain (to say nothing of many political bloggers) has watched as their own obsession with the 24-hour news cycle short game has blown up in their faces over the last 18 months.

Will that be the case on health care? I'm assuming M.'s internet slap was about health care, but his unwillingness to specify, relying instead on the kinds of overstatements and generalizations that would get laughed out of a Comp 101 class, makes it that much easier to point out how silly the statement "His troops knew how to wage a traditional campaign, but hadn't given serious thought to the problem of dealing with a chaotic aftermath. When it came to the "postwar" period, Obama never really had a plan" really is.

The stimulus plan; Sonya Sotomayor; ending the torture policies of the previous administration; overturning the gag rule on abortions; signing the fair pay act; expanding government health insurance for needy children; lifting restrictions on stem-cell research; mending the U.S.'s relationship with the UN; taking down the Somali pirates; reversing Bush-era policies on the environment; and improving the image of the U.S. abroad after eight years of deterioration.

Those are just the achievements of the first seven months (seven months!) that I can think of off the top of my head. Reading M.'s post, I thought of this brilliant Daily Show sketch, whose every-news-cycle-is-the-most-important-news-cycle fatalism is only a slight tweaking of the tone of the coverage one might find on CNN or in certain sections of the 'progressive' blogosphere. Yeah, I'd like a lot more to be done, too, starting with getting us out of Iraq. But M. and John Amato and all the other bloggy Chicken Littles do remember the last eight years, right, and the massive pantload of problems the previous White House tenant left his successor to clean up?

It's like Michael Douglas says in The American President: America is advanced citizenship. It takes time and a lot of hard work, even under the best of circumstances. And for the first time since I've been alive, we have a person in the White House who is not driven by religious fervor, family psychodrama, or end-of-days solipsism; that's actually pretty comforting. (Seven months, people! Seven months!).

And now he's trying to tackle a problem that Presidents with far greater majorities-- from FDR to Truman to Clinton-- also failed at fixing. Screw Social Security-- health care is the third rail of American politics, and only LBJ managed massive changes. His Medicaid and Medicare programs had unrepeatable situational advantages-- a President still operating under the goodwill granted him by his predecessor's assassination; one of the largest electoral victories in American history; and a far stronger economic environment, in a time when the country trended much more liberal (and when the deprivations of the Depression were still fresh in many minds). Also, frankly, LBJ was a white southerner who spoke Blue Dog Democrat and congressional arm-twisting better than any other Democratic president of the last 100 years. Under those circumstances, Medicare was much easier to pass (even if the more unhinged of the right wing now want government to "keep its hands off" said program).

Steve Benen linked to Matt Yglesias' arguments about the inherent structural disadvantages the executive branch faces in this kind of fight. I would add Fox (and its various acknowledged and unacknowledged allies in the press, like The Washington Post), the massive resources of the insurance companies in this fight, the political diversity of his own party, and ongoing attempts of the Tea Baggers to conflate health care with "socialism" and the bizarre obsessions with Obama's birthplace.

I still think health care will pass in some form, and one of the useful (if nauseating) aspects of the town hall riots is that they remind us that the worst excesses of America's Jim Crow/John Bircher past still linger with us: if nothing else, Obama's long game opens up the opportunity for precisely the kind of "teaching moment" on race and language that he spoke of last month. And language might be at the heart of my concerns: I started this post disgusted at the extremism of Steve M.'s headline, and the unhelpfulness of the false analogies it created; as I come to the end of it, I think what I was really writing about was the
tone of the language of folks who purport to be progressive supporters, especially online. We might call it the They Might Giants Position: "If it wasn't for disappointment, I wouldn't have any appointments."

From his past posts, I have to believe that Steve M.'s privileging of a realpolitik mindset comes from a well-intentioned place, but the dismissal of optimism that runs through his post (and the concurrent embrace of a wartime analogy) feels like a dead-end to me. I said last year that Obama's greatest challenge was on language-- that, per Derrida, the state can accept any kind of radical proposal as long as it comes draped in the language of convention. Throughout the campaign, and right up to the moment of his defense of Henry Louis Gates, Jr., Obama has offered challenges to both the right and the left about their rhetorical conventions and the "juridico-political contracts" they guarantee, and it's an anxiety about that challenge that seems to permeate passages like M.'s: "He and his people seemed to think that there simply wouldn't be that kind of factional strife after the old regime fell; they believed that, despite years of tension between the factions, it would end in an instant and the citizens of the country would immediately see themselves as united."

Well, no. But this a long game, remember. And what I wrote last year after Obama's "Rev. Wright" speech still holds:

In his book The Avant-Garde Finds Andy Hardy, Robert Ray quotes the anthropologist Michael Taussig, who, when he asked why certain colonial movements had succeeded, was told "Because their stories were better than ours." For so long, American politics has been dominated by well-worn narratives about itself, and about its various threads of race, class, gender and identity; much of the primary season thus far has been dominated those older narratives (of both the left and the right) and their shibboleths. What's exciting about Obama's speech was its desire for new narratives, for better stories about who we are and who we might be, stories that acknowledge pain while still expressing a hope for the future. In blog terms, it's a re-routing of conventional narratives, finding new links and paths through the familiar, whose turns offer different perspectives from the linear fatalism that often dominates such debates. It's a reminder that "the audacity of hope" is not just a good campaign phrase (although it is certainly that), but also a way of thinking about the links between rhetoric, imagination, and possibility (there are many parallels between politics and academia, but a key one might be an overreliance on a patented hipster skepticism, a desire to not be caught out, and to therefore close out the notion of a different future).

If health care is the third rail of American politics, is hope the third rail of its rhetoric, the thing too many bloggers are afraid to touch, in case their comments sections die?
Labels: Blogging Comics Media Obama Politics Random Oddness Writing