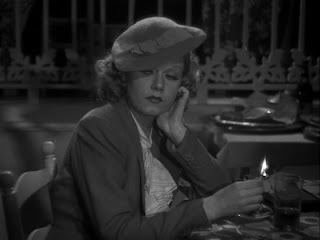 Around 1:45 a.m. or so, just before falling asleep, I flipped on Turner Classic Movies, and stumbled on the last twelve minutes or so of Wife vs. Secretary (1936). I didn't know what the film was at the time-- I only knew that its images fascinated me. When I flipped over, Myrna Loy was standing in a shiny silk dress, the light bouncing off its silvery folds and making her look even more otherworldly and beautiful than usual. She was on the phone, framed in a long shot, her body pushed over to the rightmost side of the screen, the telephone cable stretching like a life line across the frame, the background a series of door frames, tables and bric-a-brac whose thin lines of light and dark made it look like someone had scratched on the negative. The film cut to her correspondent, Clark Gable, who she hangs up on; Gable pauses before putting his own phone receiver down, and the wipe moving across the screen almost seems to pause with him, until both dropped receiver and completed wipe line signal a transition to the next scene. I'm sure that "paused" wipe was an optical trick brought on by the late hour, but it's what hooked me into the movie, made me want to see what happened next. On the level of narrative, Wife vs. Secretary seems like hokey melodrama, but its mise-en-scene in these final moments is gripping, as director Clarence Brown expertly uses soft-focus lighting, tight close-ups, and art deco set design to tie the characters to their landscape, to evoke a world of love, loss, and movie star glamour (I also caught glimpses in these last moments of Jean Harlow being called by Jimmy Stewart on a pay phone). I thought of Gilbert Adair's Flickers as I watched, and his passage in that book where he talks about film stills: "Can a single film still tell us everything we need to know about a film?" He goes on to say how he doesn't want to see certain films, so as not to spoil those spellbinding moments pulled out of time. I'm not sure I want to see the rest of Wife vs. Secretary, and I'm not sure I need to: cut out of the larger narrative, these scenes are jigsaw puzzle pieces whose mysterious shapes and fragmented images are far more fascinating than any whole into which they might fit.
Labels: cinephilia Flickers movies TV Writing